One Groin to Wear Them All

When I reviewed DeathSpank back in July, one of the things that I lamented was the uncertain nature of a sequel. With creative mastermind Ron Gilbert departing Hothead Games shortly after development finished, the future of the Dispensor of Justice was precarious. The last thing I ever expected was to not only be hearing about, but actually playing that sequel less than three months later. DeathSpank: Thongs of Virtue‘s announcement and subsequent release was a shock, especially when it was revealed that the game was actually completed prior to Ron Gilbert’s departure. But a shock though it may be, it’s a welcome one, because Thongs of Virtue is every bit as witty and entertaining as the original.

Unfortunately, that also means that there’s very little to say about DeathSpank: Thongs of Virtue that hasn’t already been said. While the story and world are all brand new, the core of the gameplay remains identical to the original title. This should come as little surprise, given the short time between the games’ releases. Luckily, the gameplay was already solid while the plot and humor is really what drove the game forward, making Thongs of Virtue a perfect, if near-identical, sequel in every way. 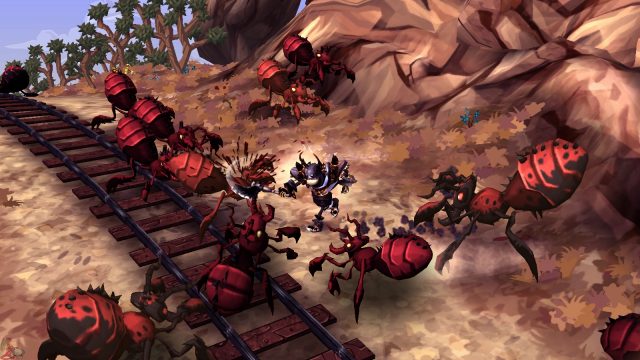 With the defeat of Lord Von Prong, the mysterious Sandy has revealed to our venerable hero the secret the villain bears beneath his knickers, and source of his corruption: the mighty Thong of Courage. One of six corrupted Thongs of Virtue, Sandy is on a mission to collect all of them together so that they might be destroyed. The Thong of Compassion is in the possession of an evil nun, and the Thong of Cuisine is worn by a famous TV chef. The Thong of Generosity belongs to jolly old Santa Claus, while the Thong of Justice is worn by DeathSpank himself. The location of the final Thong, the Thong of Peace, is still a mystery.

With this new mission in mind, DeathSpank sets out on a new journey to slay these corrupted folk heroes, ruining religion, Christmas, and day-time television for millions of children worldwide. While the first game focused on parodying classic fantasy settings and fairy tales, DeathSpank: Thongs of Virtue sets its sights on more modern culture, with settings that include World War II-stylized battlefields, jungles and pirates, the Old West, alien invaders, and of course, the North Pole.

For the most part, Thongs of Virtue has the same gameplay as its predecessor. The game plays out as a typical hack ‘n’ slash action RPG, with each of the four face buttons corresponding to a different equipped weapon. As you explore the zany world, strange and disturbing individuals will ask DeathSpank for help with their trifling problems, which he will happily solve in the most blood-thirsty way possible. The world of Thongs of Virtue is quite a bit larger than the world of the first game, which provides even greater bang for your buck. Eventually you even get a sailing ship, which lets you explore an ocean filled with islands. 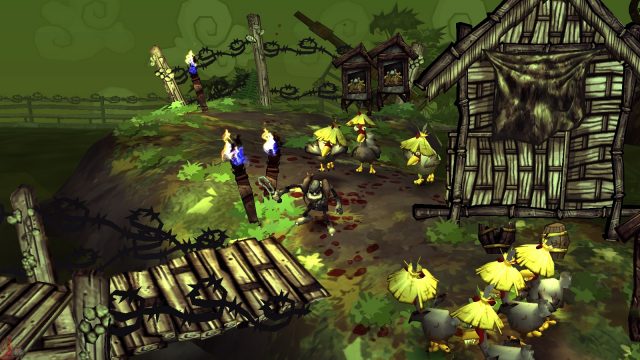 Far away on a tiny island, DeathSpank faces his deadliest foe: The VietCock.

There have been a handful of gameplay tweaks and additions that make things a bit more interesting. Several new types of weapons have been added, including jackhammers and, believe it or not, monacles. Ranged weaponry has received a much larger overhaul. The crossbows from the first game have been replaced by firearms, including pistols, revolvers, shotguns, machine guns, and even bazookas. There’s even an alien laser gun. In general, ranged weapons are much more useful in this game than in the last.

As with the first game, the visuals and audio are both terrific. The environments in particular are gorgeous, although the ocean segments are a bit too vast, leading to extended sections with no discernable landmarks. The soundtrack has a great jazz feel that makes DeathSpank’s overly exuberant activities all the more amusing. The voice acting is likewise terrific, boasting the kind of over-acted hubris you might find in a cartoon show.

Although there isn’t much to set Thongs of Virtue apart from the first DeathSpank game, evolution isn’t really necessary. DeathSpank should still be fresh on the minds of those who played it, and if it didn’t interest you, there’s really nothing here to change that. Really, DeathSpank and DeathSpank: Thongs of Virtue are a singular game split into two parts, and with a combined playtime of well over thirty hours, it has a terrific price as well. If you enjoyed DeathSpank‘s first adventure, the second one will be right up your alley.