Not the Island You’re Looking For

Dead Island: Riptide is a follow-up to the original Dead Island that continues the story on a new, though equally not alive, island. Though the game has its moments, a number of issues with the mechanics combined with a majority of areas having boring level design hold Dead Island: Riptide back. Without much real challenge and not much new for returning players, there’s not a lot of motivation to dig into this RPG. It’s a shame, because the core elements could easily have made a much more enjoyable zombie experience.

The story takes place immediately following the end of the original Dead Island, with the game’s four heroes escaping the island and landing on a military ship. Naturally, things quickly go downhill from there as the heroes are taken into custody by the military and the ship is infested with zombies soon afterwards. Despite an attempt to add some twists, the story never really ventures beyond typical zombie movie plot beats. The NPCs lack any sort of character depth, and when betrayals and other character events occur there’s just no emotional impact. The story serves its purpose as a way to keep things moving while providing a reason for its primary missions, and does not genuinely try to do more. In this regard, the story serves its purpose. This does unfortunately represent a disappointment for an RPG, given that many moments throughout fall flat thanks to a lack of character development. 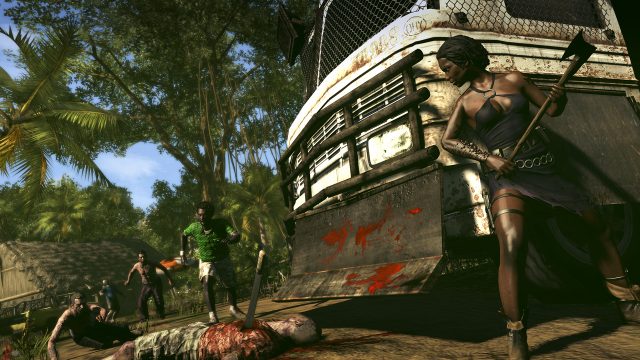 The action itself has a large number of issues. Dead Island: Riptide is a first-person action RPG, focusing mostly on the use of various melee weapons with some gunplay included in the mix as well. Though the action itself relies heavily on the player’s skill, typical RPG leveling along with skill trees unique to each character influence the combat. These skills provide bonuses to certain weapon types, to health and stamina, and in some cases even provide extra attacks that will help players against the zombie hordes. Weapons can also be modded with extra effects such as elemental damage, or the odd act of wrapping one in barbed wire will hurt the enemy instead of the wielder. Fighting through masses of zombies is especially satisfying with these modded weapons. Firearms are also present in the game, but the ammo supply is never sufficient enough for them to supplant the the use of melee weapons. Still, the availability of more mods as the player advances prevents the lack of firearms from becoming a major drag.

There are a number of other issues that prevent the gameplay from being a completely smooth experience. The first is the way the game handles inventory and the durability of weapons. Melee implements degrade at a relatively quick pace, seemingly with the intention of provoking a survival horror feeling that forces careful inventory management. Unfortunately everything else about the game completely contradicts this. Melee weapons litter the game world, so much so that the trouble will be managing the limited inventory and deciding which ones to keep. In addition, there are repair benches all over the game’s locations, so that as long as the player has some cash on hand there’s never any real risk of being without a beloved modded weapon for long. This makes the management of weapons feel like pointless busy work instead of a way to carefully manage resources to survive. 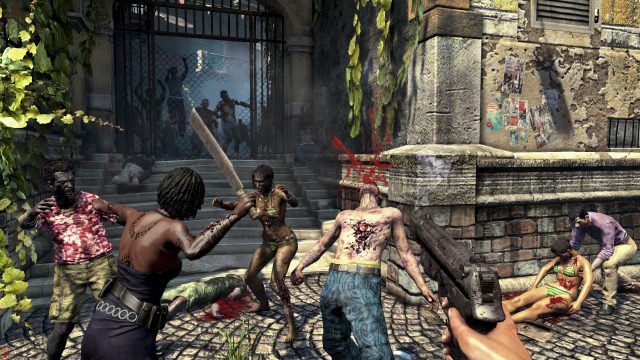 The city areas are some of the best in the game.

The game balance and level design further this issue. Dying in the game simply causes the player to respawn after a short countdown. While this works fine in multiplayer to keep the action going, in single player it just further makes the durability system feel pointless. Why worry about the condition of equipment or bother to avoid attacks when the player can simply respawn and continue immediately, with bare fists if necessary? It completely destroys the tension of combat. The exceptions are the base defense segments in the game, where an NPC dying will cause a revert back to the last checkpoint. These segments can be tense and chaotic, and give a sense as to what the game proper could have accomplished if it took a similar approach. These segments aren’t immune from the game’s issues however, as the player will always find a repair bench and extra weapons and ammo to eliminate any need for conservation.

The early game is filled mostly with fetch guests and boring treks through jungle and water areas sparsely populated with the game’s weakest assortment of zombies. Once the game’s latter half moves to a city area, some effective moments with more carefully constructed quests make Riptide pick up noticeably. Locations like dark buildings and tight streets allow the game to create more atmosphere and challenging combat scenarios even with the ability to respawn. These areas also include the most challenging zombies the game has to offer, which require more than just brainless hacking.

In terms of audio and visual, the game shines quite nicely, with one big caveat. The game takes place in first person and it attempts to realistically create head movement based on the player’s movements. This means that with every motion the perspective will jerk around, sometimes in an energetically violent fashion. Such a mechanic may make sense in a horror game, but the result is often extremely disorienting and can cause motion sickness. At least the locations and zombies in the game look fantastic, with some especially gory effects when taking the undead down. Riptide mostly lacks music, but uses this as an advantage with great environmental and zombie sound effects to keep the player on edge. Combat also has a great element of sound to it, effectively creating the audio qualities of the player’s respective weapon and mod choices.

At the end of the day, Dead Island: Riptide has a lot of good ideas, especially in its latter half. The combat, while repetitive and often frustrating with the annoying inventory management, still manages to provide exciting encounters. It just seems as if the developer didn’t trust players enough to fully immerse them with the survival horror title suggested by the mechanics. There’s a good template for a zombie RPG that hopefully can be realized in the future. Sadly, this is not the game to do it. Those both new and old to this young franchise  would do best to approach it with the caution one should employ next to actual zombies.