This Wasn’t in the Brochure!

Dead Island is a strange game, one that has an odd desire to simultaneously delight and disappoint its audience. This bizarre dichotomy existed even before the game was released, beginning with a brilliantly haunting announcement trailer and evolving into a hip hop music video. The disparity between these two trailers actually sums Dead Island up pretty well. It’s a game ripe with the potential of an emotionally gripping narrative that instead settles on gory thrills and bravado.

The zombie outbreak begins on the island of Banoi, located just off the coast of Papua New Guinea, and the story starts in a lavish beach resort where the player takes control of one of four main characters, each with a surprisingly detailed backstory that is never explored further during the game. There’s Sam B, a one-hit-wonder rapper hired to do a show at the resort, Purna, a former Sydney police officer now working as a private bodyguard, Logan, an ex-NFL superstar whose career ended after a street race gone wrong, and Xian Mei, an undercover Hong Kong police officer posing as a receptionist at the resort. Escaping from the hotel, the player is taken in by a small group of survivors holed up in a lifeguard tower. Discovering that the four heroes are somehow immune to the infection, they’re tasked with going out, fighting off the infected, and gathering supplies for those who can’t, with the ultimate goal of escaping the island altogether.

While the game does have a few legitimately intriguing scenes scattered throughout, more often than not, the plot only exists to give players an excuse to bash in zombie heads. Though Dead Island seems to want to make players feel for the denizens of the island, most attempts fall flat. Even the plot is fairly bare-bones, made up of a series of quests that send the player out to one place or another for a variety of survival-related reasons. When the source of the outbreak begins to make itself known in the third act, the story becomes slightly more interesting, but it doesn’t last long. Disappointing though it may be, Dead Island doesn’t live or die by its story.

Dead Island‘s combat system is primarily made up of first-person, melee action. The game has dozens of different types of weapons, generally falling into three categories: blunt weapons, sharp weapons, and firearms. There are also a few explosive devices such as grenades and molotov cocktails that can be thrown at the zombie hordes. Though first-person melee systems usually have their share of issues, Dead Island actually manages to pull it off very effectively. Players have to work around a stamina bar, which goes down when swinging a weapon. Heavier weapons burn through more stamina with each swing. More important to the combat is the actual physics of striking down foes: it just feels real. Zombies stumble backwards when struck and even fall down. If hit with enough force, they’ll fly to the side or their bones will break, creating a limp, useless limb that hangs at their sides. Once knocked down, it takes them a while to get back up, and players can use these opportunities to kill them with impunity, or deal with the other three zombies bearing down on them. There are also seven different types of zombies throughout the game, and players will need to use varying tactics to defeat them. 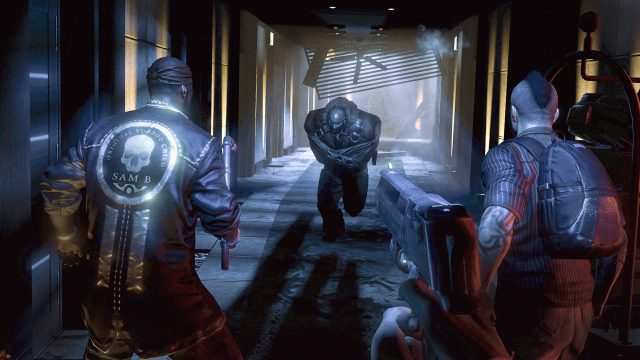 While the core combat mechanics are solid and enjoyable, they have their share of problems as well. Firearms, for example, are extremely rare and ammunition is limited, particularly in the early stages of the game, making them a poor choice for taking care of the huge groups of zombies that generally appear. With one of the main characters designed to focus on firearms, this seems like a questionable design choice. Similarly, inventory space is limited for weapons and equipment, causing the same sort of problem for the character dedicated to throwing weapons. Melee weapons have their own issues thanks to decaying durability. Though they can be repaired, it’s a system that doesn’t really add much to the gameplay other than requiring players to regularly visit workbenches. Weapons that have lost a lot of durability also become significantly weaker, making it a two-sided issue that’s more annoying than anything else.

Most of the game’s problems, however, lie outside of combat. As open-world games go, Dead Island is extremely poorly designed. While the areas one can explore are huge and detailed, travel is incredibly frustrating. Though the game does sport a quick travel system, it is easily one of the worst ever implemented. Players can only quick travel to and from designated quick travel locations, which means that after venturing out into the world, players will need to run back to a quick travel location themselves. Several quest-givers are located quite a distance away from any quick travel spots, the spots themselves are rather sparse, and the zombies respawn quite rapidly, making getting around a frustrating and time-consuming activity. More time is likely spent backtracking during the game than actually completing quests, and it gets old very quickly.

The game’s weapon system is also a mixed bag. Players will find dozens of different types of weapons along with spare parts that can be used to modify them, using plans discovered in the world or earned through quests. Unfortunately, quality weapons are extremely hard to come by. Dead Island sports the same rarity system that RPGamers should be very familiar with by now thanks to games like World of Warcraft and Borderlands, but the balance of these rarities is extremely out of whack. Weapons are scattered all over the place, but almost all of them are weak, common-rarity items. Even uncommon weapons are shockingly rare, and players will likely discover that they find the best weapons by purchasing them from vendors rather than by finding them in chests or as quest rewards. It’s extremely frustrating, because weapons are quite literally everywhere. Players will find toolboxes with wrenches and hammers, fire axes hanging from walls, and various knives hanging in kitchens and bars, but they are all invariably of common rarity. The game even explicitly states in its loading screens that the best weapons can be found in metal chests hidden throughout the game world, but nine times out of ten, these chests also contain common items, even the locked ones.

As players complete quests and kill zombies, they gain experience and levels, and each level brings with it a skill point that can applied to one of three skill trees. While each character’s skill trees vary slightly from one another, unfortunately they don’t do enough to differentiate the characters. Each character has a fury, combat, and survival tree, and the skills found in these trees, though slightly different, ultimately amount to mostly the same thing. In the end, all four characters play almost exactly the same. Players may also run into an issue when trying to unlock new tiers of the skill trees. Unlike most games of this type, skills must be added to each new tier of the tree in order to unlock the next level. Putting additional points into the previous tier will not allow you to progress. 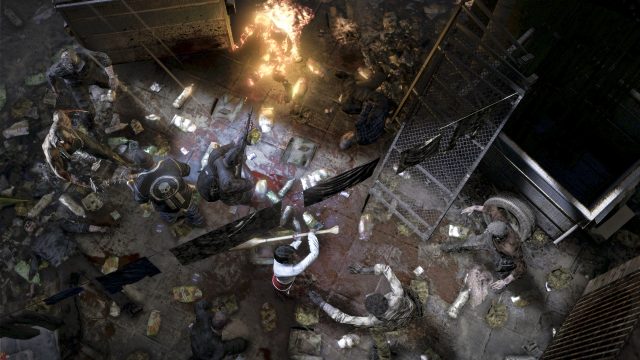 The butcher on the left normally wouldn’t appear in this area, Xian Mei wouldn’t be using a paddle this far into the city, Logan wouldn’t have any ammunition for that assault rifle, and the camera wouldn’t be looking down from above. Other than that, this is a totally accurate representation of Dead Island.

One thing Dead Island does particularly well is how it handles its cooperative multiplayer. While other, similar games make use of match-making systems, Dead Island sports an absolutely brilliant drop-in, drop-out system that tells players when another player is in the same general area and on the same quest as they are. When the prompt appears, players can jump into each other’s games and get help completing quests. It’s a much more streamlined method for finding coop partners, and it also bears mentioning that the game’s combat is much more enjoyable with an ally or two. While one might assume that this method wouldn’t trigger all that often, in practice it actually triggers almost constantly. Unfortunately, in practice players also seem to rarely make use of the feature, so how helpful it is probably depends on how willing a player is to jump into a stranger’s game.

On the visual front, Dead Island is a mix of good and bad. As mentioned previously, the animations are phenomenal, particularly for the zombies and how they stumble to their feet after being knocked over like a rag doll. The environments are also extremely lush and attractive, though they can get repetitive in certain areas, particularly the bungalows in the resort. There’s also a problem during cutscenes, during which the backgrounds go “out of focus,” though really they just look ugly and warped. Character designs are solid, but the models themselves have a few problems, especially when they’re talking. It’s not uncommon to notice the distinct shimmer of overlapping polygons around characters’ faces.

The audio is better, especially in the sound effect department. Striking zombies with various weaponry always results in a satisfying thunk or slicing sound, but the guttural moans and growls of the zombies also permeate the entirety of the game, creating an eerie atmosphere that’s sure to keep players on their toes. The music is also quite good, though it’s almost entirely atmospheric. Only two tracks really stand out as memorable. One is a haunting, melancholy string and piano piece that can be heard in the announcement trailer, which appears in a few key scenes throughout the game and always manages to grip the heartstrings. On the opposite end, Sam B’s throwaway rap song, “Who Do You Voodoo,” is catchy in its own ridiculous, though not necessarily good, way.

It’s hard to say whether Dead Island‘s quality elements outweigh its many problems. In addition to what’s already been mentioned, the game is also far too long for its own good, easily lasting well over forty hours. The final act of the game is also needlessly isolated from the rest of the game world, with the “point of no return” arriving five or six hours before the actual finale. At that point, cash becomes scarce and players may find themselves broke and unable to repair their better weapons before the end. Ultimately, I have to say that Dead Island fell flat. While there were several moments throughout the game that I enjoyed, more often than not I was either frustrated or bored with the game, mostly due to the sheer length of it and the constant backtracking. In short bursts or with a group of friends, there’s certainly a lot of fun to be had, but it’s the sort of mindless, arcade-style fun you’d find in Zombies Ate My Neighbours. Players looking for a complete package had best look elsewhere.