Get Off of This Cloud

Console launches are generally not the best time to locate quality RPGs. The PlayStation 2’s launch was no exception to this rule, and the few titles on offer before Final Fantasy X was released are not well-remembered today. Dark Cloud is one of those early PS2 RPGs, and it demonstrates how slipshod games can be that are released early in a system’s life to supply product in a hurry. Its most interesting aspect of town construction was done on the SNES in Act Raiser and Soul Blazer, while the rest of the game is such a horrific blend of tedium and rage-inducing moments that there is no reason to recommend it at all.

Dark Cloud utilizes two mechanics that make it stand out, one outside the dungeons and one inside. Similar to Soul Blazer, finding characters and buildings while exploring the dungeons needs to occur in order to progress. Unlike Soul Blazer‘s automatic delivery of the wayward thing to its destination, Dark Cloud sets the task of reconstructing the depopulated domains to the player. Doing so is more time-consuming than it should be, with multiple materials that must be reassigned to each building along with the need to quiz the residents in order to determine everything their abodes require. The actual assignment of buildings on maps is reminiscent of Sim City with a slower and more constrictive interface. Compared to the dungeon diving that makes up the vast majority of Dark Cloud, however, constructing the towns is quite entertaining.

The other distinctive aspect of Dark Cloud emerges when fighting enemies in its dungeons. Every weapon has a certain number of uses, and when that number is close to being reached the player will hear an irritating alarm signal that can only be shut off through repairing the equipment. If a weapon’s number of uses reaches zero it will break and vanish, potentially erasing hours of work put into upgrades. Characters only grow stronger through finite applications of items to improve their statistics, making the retention of powerful weapons vital to progress. Each weapon gradually improves as it is used to kill enemies, but some enemies drain their durability faster than others, mandating the use of weapon repair items to keep characters from suddenly being stuck with a broken one. The system could have been enjoyable if some provision against losing hours of weapon enhancements through one unlucky action had been implemented. Instead Level-5 decided to keep things as frustrating as possible.

Every dungeon level in Dark Cloud shares exactly the same basic format. All enemies must be killed until the one that possesses the item necessary to open the door to the next floor is slain, at which point the player can progress. More characters become available as the narrative continues, but because only the protagonist is capable of acquiring the sealed people and real estate necessary to rebuild the towns, switching constantly to him is required. The other characters are intermittently useful or necessary, but sticking to the protagonist is mandatory throughout. 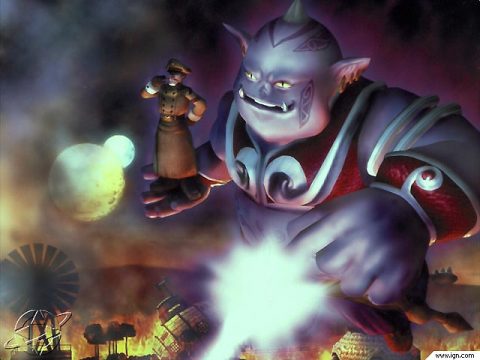 Majin Buu’s long-lost brother, is that you?

The best aspect of dungeon exploration is its convenience, letting players resume at whichever floor was last reached instead of starting all over from the beginning of the dungeon. This helpful aspect is overwhelmed by myriad problems, starting with the randomly generated monotony of the dungeons. The first floor of a dungeon is interesting, but the novelty wears off very quickly as every subsequent floor looks exactly the same. Exacerbating the dull dungeons is their beyond-unnecessary length, forcing the player to go through far more floors than required in order to pad the game’s length. A further wet blanket is provided by importing a Rogue-like mechanic through forcing the characters to slake their thirst periodically to avoid HP loss, which ranges from merely annoying to incredibly aggravating when the game makes it happen faster.

All of these grievous issues can eventually be dealt with through perseverance, but the game’s wretched camera is impossible to ignore. While exploring dungeons its behind-the-back view is adequate, although it can be difficult to see just how close the player is to an object until physical impact occurs. The camera’s completely abysmal nature is revealed when in combat, where it will steadfastly refuse to display necessary information. It is possible to make the camera focus on a single adversary, but it will do this to the exclusion of everything else in the area. The player will not see a wall or other obstruction until the time comes when movement is suddenly impeded by an invisible barrier, hardly the ideal state of affairs for rapidly engaging enemies. The situation is even less pleasant when more than one opponent is present, as making the camera focus on one enemy will cause others to be ignored in the same way obstructions are. The penalty for dying in a dungeon is being booted outside minus half one’s current money, and Dark Cloud will inflict it frequently by causing unseen hazards to blindside the player.

Story is not Dark Cloud‘s forte, and what it provides is no more than a frayed wicker basket in which to place the smelly laundry that is the rest of the game. Events begin with a nefarious military officer reviving something called the Dark Genie, which proceeds to do what it was wont to do in earlier times; namely, slaughtering people. After destroying young Toan’s hometown, a magician conveniently appears to give the boy a means of restoring all those killed along with their worldly goods. The rest of the story finds a few allies joining Toan’s journey to restore the world and best the Dark Genie. The plot is scanty and localized in a lackluster fashion, but is not terrible. A few of the vignettes showcasing restored personalities attain some moderate interest, even if the core tale is wholly forgettable. 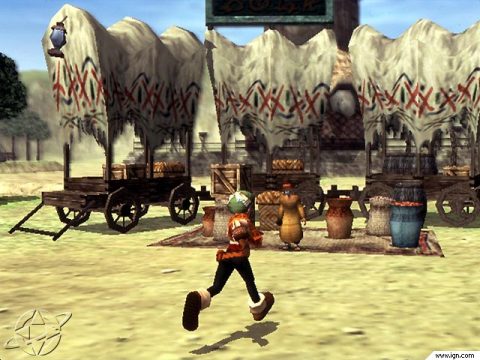 Buy Weapon Repairs early, and buy them often. Or watch the weapons break, if that’s your thing.

As a first generation PS2 title, Dark Cloud‘s visuals are unimpressive. They are reminiscent of the Dreamcast, but do not look ugly so much as they simply do not push the hardware at all. The constantly recycled visuals in the dungeons do the game no favors, but Level-5’s design would have suffered from that ailment even with the most powerful processing potential that could be provided.

Music suffers from a dearth of variety but sports a few tracks that remain pleasant for the duration of their use. The battle theme is not among them, and its appearance becomes grating very quickly. Dark Cloud is also a game that considers the player too stupid to recognize when HP or weapon durability is near exhaustion, and will supply an irritating alarm sound until this condition is corrected.

Once upon a time, those who had to play new PS2 RPGs had little choice but to invest the roughly thirty hours required to finish Dark Cloud. Nowadays it’s an aberration from the generally esteemed reputation of Level-5, managing the impressive feat of being repellent even among first generation RPGs for a system. At best, I was bored while playing Dark Cloud, trudging along the later floors of dungeons that all looked the same. Usually the game produced far more pronounced negative feelings within me as all its issues converged to try inducing an aneurysm. The PS2 accrued an enormous library of RPGs in its lifespan, and almost all of them are more worthwhile than this.