I Dig Her Batrachian Lips

Celebrating its very well-received outing on Xbox Live Indie Games, Zeboyd Games has given PC gamers the chance to enjoy its lighthearted RPG, Cthulhu Saves the World, with a number of gameplay tweaks and some new features. The Cthulhu Saves the World: Super Hyper Enhanced Championship Edition Alpha Diamond DX Plus Alpha FES HD – Premium Enhanced Game of the Year Collector’s Edition (without Avatars!), hereafter known as the Super Edition (also available on Xbox Live Indie Games), is a very enjoyable romp with an appeal that spreads across the RPG spectrum thanks to its retro graphics, finely tuned battle system, and well-written humour.

One of a number of games that hark back to the retro days of gaming, Cthulhu Saves the World is very easy to pick up and play. Players take control of the mighty Cthulhu himself, but unfortunately a wizard has sealed his powers and the player must help Cthulhu get them back. Doing so requires Cthulhu to become a true hero, and thus he embarks upon a very tongue-in-cheek quest that ultimately leads to him saving the world, picking up a number of entertaining allies as he goes. The controls are simple and work equally well using either the keyboard or a gamepad. Players will find their time split between the first-person, Dragon Quest-esque battle screen, and the standard top-down view when exploring dungeons, towns, and the world map.

The battle system is a fairly simple turn-based affair at first glance but contains a surprising amount of depth. Enemies gain strength with each passing turn, meaning that players will need to consider the most efficient ways of winning battles. Simply grinding out basic attacks is rarely an effective tactic, and players will be required to use the full array of abilities that Zeboyd Games has provided. In addition to the various damage-dealing attacks, players can inflict various statuses, attempt to draw enemy strikes onto specific characters, or link up with special Unite moves.

The party, which consists of up to four characters, is fully healed after each battle and returned a small amount of MP, allowing the leeway for these random battles to employ tactics rather than being simple distractions. If the party should get wiped, players do have to option to retry a battle, provided at least one of the 1-ups that perform the same function they do in platforming games is in the party’s possession. Being able to retry battles, along with saving anywhere, combine with frequent MP restoration points to give players feel little frustration at an unlucky wipeout or a simple misjudgement. Battles also play out at a nice quick speed, with zero loading or unnecessary fluff. Players do get some control over character progression, being able to select one of two level-up rewards each time. 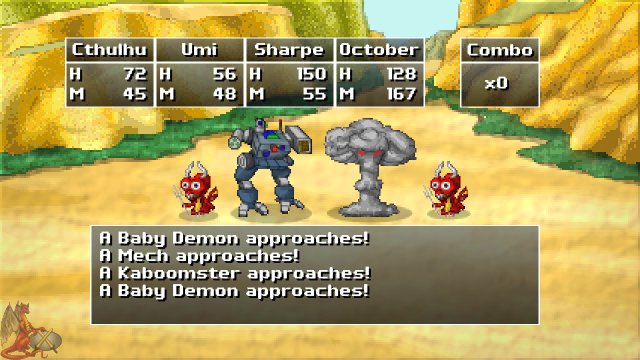 Who designed this campaign setting?

Dungeons themselves are generally good fun to explore, although they do have some flaws. Most have a large number of paths, so those who enjoy investigating will find plenty. The flip side of this, however, is that dungeons often just feel too long and winding, not helped by the lack of indicators that progress is being made until one is almost staring it in the face. There’s not too much in the way of puzzles outside of route-finding, but this is a point in Cthulhu‘s favour as any extra tasks would easily become bothersome in the current dungeon designs.

Random battles take place in both dungeons and on the world map, occurring at a steady enough rate to keep things mixed up without becoming an annoyance. Each dungeon has a limit to the number of random battles that are faced, allowing those who want to find all the loot to do so in peace. The limit is usually set so that most people casually exploring will be just about on the verge of meeting it by the end of the dungeon. Those wishing to grind are also catered for, with an option in the menu allowing a battle to be started at any point.

The underlying story itself isn’t anything particularly noteworthy. Plot points are often skipped over and the game really could have used more content in the story, plus more fleshing-out of the world. It is pretty clear, however, that the story is not intended as one to be taken especially seriously, with the fourth wall easily dismantled within the first thirty seconds. This is all to Cthulhu Saves the World‘s benefit, as where the game shines through is in its humour and tongue-in-cheek references. The well-written humour fits nicely into the dialogue and descriptions to ensure the game remains light-hearted and entertaining. A good balance has been established in keeping the amount of humour to a sensible level, meaning there’s always enough to provoke a smile, but never so much as to overshadow the gameplay. The cast is a good source of charm, especially Cthulhu himself, who easily steals the show. A couple of the party members prompt lingering thoughts about the point of their inclusion, but the overall enjoyability of the game and party interactions mean that these thoughts never come to the forefront. 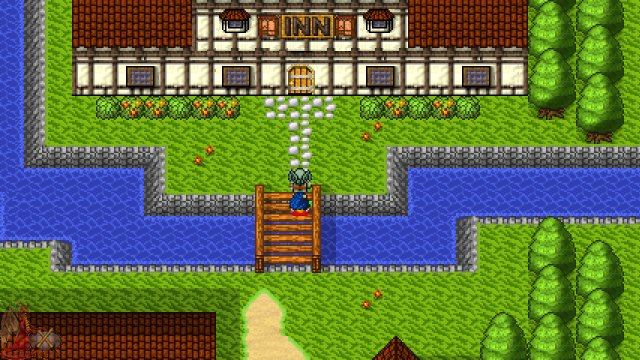 Cthulhu Saves the World will take a bit under ten hours on a normal playthrough. The Super Edition is very well-balanced in terms of difficulty, most of the time providing enough of a challenge to keep players on their toes on normal difficulty. After completing the game players can play it again at one of the other levels of difficulty or try out one of the bonus modes, each of which adds something extra to the core game. Players’ choices include a score attack mode that rewards players for defeating bosses while underleveled, a go-it-alone mode, and finally the Super Edition also includes the Cthulhu’s Angels mode, which sees Cthulhu delegating the world-saving to an all-female party with new dialogue, characters, and abilities. Also added is a director’s commentary option, selectable when starting a new game in any mode, which provides some rather interesting insights into the game’s development process.

Naturally, the visual quality is limited by the sixteen-bit format, but Zeboyd Games has done a very good job of making the artwork attractive. Dungeons are all unique and interestingly designed. The various characters and enemies share in the variety and have clearly received a lot of love, taking differing degrees of inspiration from other sources, but all giving their own little twists to breathe a bit more life into the world of Cthulhu. On the music front, a very good job has been done that complements the retro graphics, adding further to the charm introduced early on. The tracks all do a great job of livening up the dungeons, world map and battles, and never become grating even when repeated. While limited in number, the sound effects also do a nice job, notably those in the battle system that augment the satisfaction of a highly damaging attack.

Even before considering the ridiculously low price point, Cthulhu Saves the World is a very enjoyable game. While there is obviously some room for improvement, the humourous retro appeal negates any impact the flaws might have made quite well. Adding the price into any calculations, there is almost no argument against the extraordinary value for money Cthulhu Saves the World provides. Those looking for an easy-to-pick-up and entertaining RPG experience would have to work very hard to find a better option.