CrossCode is a homage to the classics of the 16-bit era, yet still manages to innovate upon the twenty-five-year-old formula. It is overflowing with style, substance, charm, and polish. While similarities can be drawn to The Legend of Zelda: A Link to the Past, Secret of Mana, and even Beyond Oasis, it maintains its own identity, making even recycled ideas feel fresh. The pixel graphics are sharp and crisp, and modern techniques are used to far surpass the visual quality of the ’90s. The strategic combat, head-scratching puzzles, and tricky platforming sections are interspersed with short dialogue sequences that keep the player emotionally invested in the quirky characters. When stuck on a tough puzzle or boss, the catchy soundtrack and desire to discover Lea’s fate will help players persevere. The ending leaves many questions unanswered, but also promises future content. Despite a grueling second half and an incomplete ending, the overall experience is enjoyable; everything it does right more than makes up for a few missteps.

CrossCode is a game within a game; the characters are all playing a fictional MMORPG called Cross Worlds. Fans of titles like Sword Art Online will feel right at home, and the game manages to tell an interesting story despite the derivative setting. The overarching narrative focuses on Lea’s personal journey as she overcomes amnesia and a speech impediment. This helps the pacing as players are learning about her through short flashback scenes and the gameplay doesn’t get bogged down by lengthy dialogue sequences. Lea is easy to understand and empathize with because players are not expected to read mountains of text or learn a complete history lesson on her life. She starts out as just a young woman playing a video game with an employee of the game company providing helpful advice, befriends other players, and slowly regains her memories while completing quests. These aren’t just restricted to typical MMORPG fetch quests from nameless NPCs, and overall, the quest design is creative. Every NPC has a unique appearance and dialect — even the most unimportant shopkeeper or quest giver is recognizable, so it’s easy to keep track of who sells what and who provided a quest. 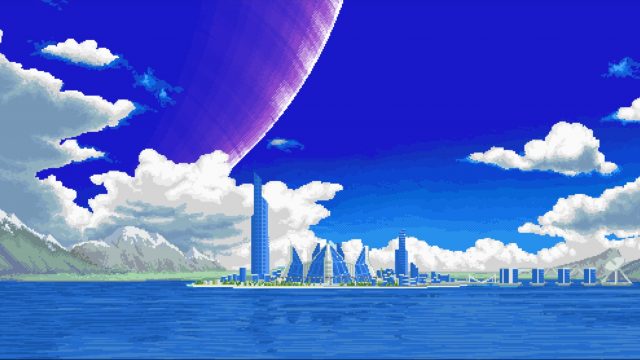 A gorgeous view of Rhombus Square, which only the highest level players can enter.

Each of the recruitable party members has a unique personality, with stories to tell and hilarious banter while exploring. Emilie, a French student, is extroverted and confides the tribulations of college, while C’Tron, who is on the nerdy side, shares interesting facts about nature. Apollo is the arrogant rival who pops up randomly to duel Lea, like Gary from Pokémon, with various others adding to the cast as Lea joins a guild and acquires several new friends during the game. The game-within-a-game format also means discovering the lore of Cross Worlds, which is as deep as an actual MMORPG. Lea must get through several temples, defeat their guardians, and obtain the four elements. The boss fights are challenging, relying on careful positioning, environmental hazards, exploiting weakness, and pattern recognition. Each temple also has a special key that unlocks additional parts of the map as well as new abilities in the skill tree.

Lea levels up, collects trade items from enemies and plants, and steadily gains access to better equipment. Health, Attack, Defense, and Focus are the four main stats. A variety of armor pieces, resistances, buff items, and passive skills, combined with the ability to swap out gear anytime, means that players can experiment with different builds and adapt based on the situation. Lea has just one skill tree to start with, but gains four additional skill trees, one for each element. At each level up, points are granted to each skill tree separately, meaning players are not forced to specialize. This also means that a skill reset item, which is very rare, will only affect one tree. 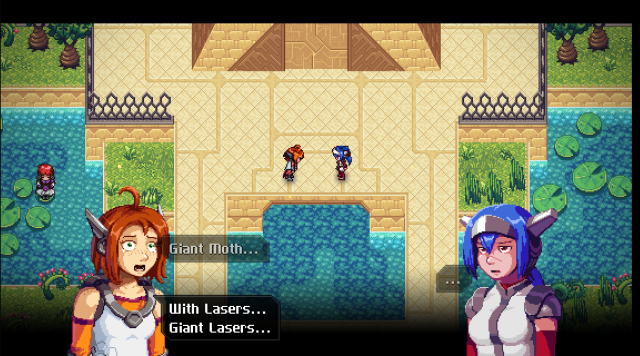 Emilie hates bugs, and the facial expressions are priceless.

While traversing the open world, Lea can have up to two companions who assist in combat, but otherwise don’t get in the way. However, each temple is completed solo. Monsters in the overworld typically won’t attack on sight, but combat encounters in temples are usually mandatory. The puzzles are creative and challenging, but some of the late game puzzles are cumbersome, even after lowering the puzzle difficulty. While some items can be purchased with money, most require additional trade items, some of which have only 1% drop rates from specific plants or enemies. A risk-versus-reward system causes drop rates to increase as more enemies are defeated in quick succession, represented by a meter that fills up in combat and depletes outside of combat. Lea won’t recover health while this meter is active, increasing her chances of dying. Fortunately, players can save anytime and there is a checkpoint at the start of each room. Unfortunately, if Lea dies she does not keep any of the items or experience she acquired in that room and the meter resets.

Combat is where CrossCode really shines. Using basic melee and ranged attacks, Lea builds up Focus, which is used for more powerful special moves, called Combat Arts. Ranged combat allows for precise aiming similar to a twin-stick shooter. Blocking and dodging can be used to mitigate or avoid damage. The combat is fast-paced, so dodge timing can be very strict. Each of the five different skill trees (neutral, heat, cold, shock, and wave) includes a choice between two Combat Arts for melee, ranged, dodge. Enemies can be scanned to learn elemental weaknesses. However, using too many elemental attacks causes an overload, restricting Lea to just neutral attacks for a short time. The impressive variety of both skills and enemies keeps the combat interesting, though there is a noticeable spike in difficulty in the late game. The lightning cat and samurai beetle enemies are especially annoying, possessing high mobility and DPS. The final boss fight is unreasonably long and difficult. Still, CrossCode provides a lengthy and enjoyable experience. 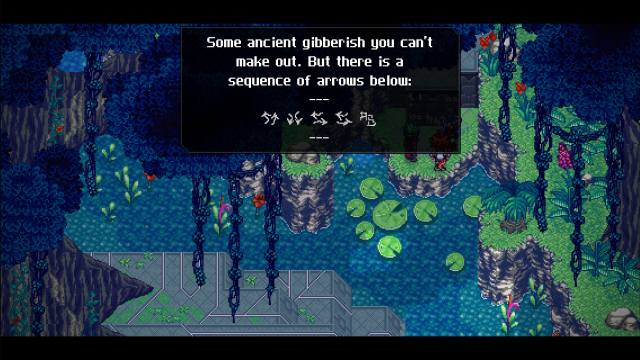 Ancient gibberish from the 1980s. Supposedly, the Konami Code can be used somewhere.

The music always matches the action, heart-pounding during combat, mellow and ambient in the dungeons. The soundtrack is memorable, with each area having a distinctly different song. Sound effects are minimalist, but get the job done. Dialogue is strictly text based, but a myriad of facial expressions do a great job of conveying emotions during conversations. The superb art design more than makes up for minor shortcomings in sound design. From the snowy mountains of Bergen Trail, to the jungles of Gaia’s Garden, each of the diverse environments is meticulously detailed, brimming with its own flora and fauna.

CrossCode may not be the most original game on the market in its quest to emulate SNES classics. However, it innovates in ways that feel natural, with a pixelated art style boasting impressive lighting and shadow effects. The seven-year development time is justified in the obvious amount of care that went into this polished product. The charming characters help carry the story along to completion without getting stale, despite a few interesting plot twists leading into an incomplete climax that is a bit underwhelming. After a 35-hour journey, I still wanted to finish side quests, slay more monsters, and collect more powerful gear. I am very excited to see the future adventures of Lea and friends.