The Future Is Neon

Conglomerate 451 is very much what it looks like at first glance. A first-person dungeon-crawler with a cyberpunk aesthetic, the game offers a perfectly competent combat experience, but unfortunately that’s everything the game has going for it. The result is a game that works decently enough to dip into every now and again, but simply never does enough to to hold interest for significant periods of time.

Ensuring the cyberpunk theme is appropriately followed, the game puts players in the role of a cell of government agents looking to clean up neon-filled Conglomerate City’s sector 451. The district is controlled by four outlaw corporations each specialising in a seedy area, such as slavery or prostitution, and it’s up to players and their agents to wrest back control. This is done by sending out squads of agents on missions into one of the five districts wherein numerous gang members meet their ends.

The game’s story campaign gives players 75 weeks to accomplish their goals, with each mission taking up one week. The overall objective is to take out each of the corporation leaders. Missions to directly assault the leader appear once the corporation has been sufficiently weakened, with the difficulty of that assault mission based on how much strength the corporation has left, so players will generally want to undercut them as much as possible before leading an assault. 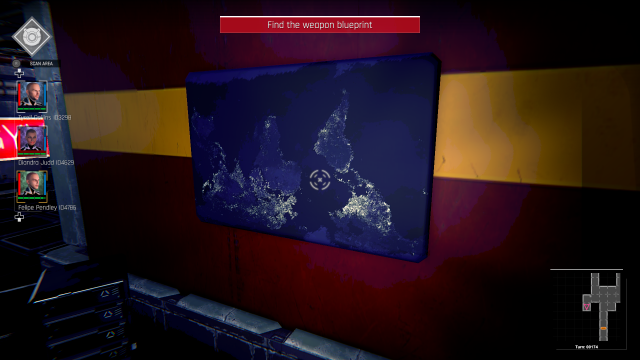 The world has been turned upside down.

Conglomerate 451 doesn’t make any substantial attempts at a narrative above telling players to go and shoot the bad guys. There is a small story thread based on communiques with another supposed cell of agents, and player responses to these messages determine which one of three possible endings they get, but really this ending is nothing more than a message at the end revealing which side they ended up on. Players can also find decryptable archives on missions that tell the story of the collapse, but it’s little more than a standard cyberpunk tale of societal collapse.

There are five missions to choose from every week. Each has a difficulty rating of one to three and impacts the same number of corporations, which bigger rewards granted for more difficult missions. However, as long as players are generally successful in their missions, they should have no trouble eliminating the leaders, likely long before time runs out. Success in this manner manages to be a source of annoyance, as the game requires players go through all 75 weeks to finish the campaign, without any option to skip a week.

The player’s agents are all clones of eight different people, each filling a slightly different combat role. Clones are not necessarily exactly alike, as when created they can be given bonus traits through DNA manipulation and mutations. They can also be given prosthetic limbs anytime after creation to enhance their capabilities, while weapons and shields can be upgraded alongside the prosthetics by equipping processors. These upgrade options are necessary to tackle tougher missions, including the boss fights against the corporation leaders, but are frustratingly hidden behind an unclear UI that doesn’t do enough to make the benefits clear or upgrades easy to apply. With the way loot is liberally doled out, players will end up with a massive list of processors, many of which are incredibly similar to the others, and nothing to do with most of them. 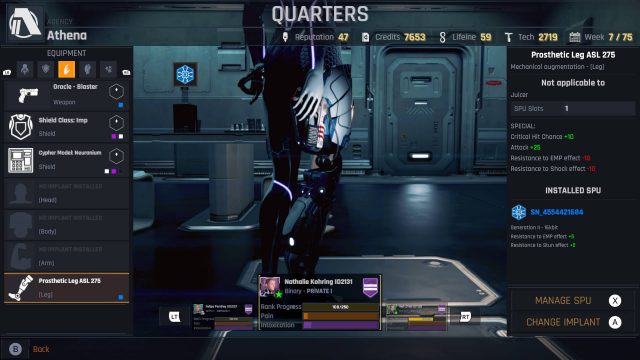 Agents are clones but there are ways to make them different, such as through prosthetics.

Each agent in Conglomerate 451 has four skills equipped at any one time, with each clone archetype given a different set of seven to choose from. Skills can be offensive or defensive in nature, potentially hitting a single enemy (or ally) or an area. Agents that survive a mission gain experience, influenced by the difficulty of the mission, towards a new rank. Each promotion gives players the opportunity to select one of two or three possible passive boosts. However, agents who die during a mission stay dead and will need to be replaced. If they took sufficient damage while in the field, agents can be afflicted by pain and intoxication, and may receive lingering physical and mental scars. However, these can be dealt with by regeneration and detox tanks that put the agent out of action for a week while they recuperate.

Missions follow the regular first-person, grid-based dungeon-crawler template. Each layout is randomised and generally fairly small as players aim to complete objectives that usually amount to finding a specific item or defeating particular enemies, and most will require a bit of back and forth as players unlock doors. Failing a mission does not mean game over, but does allow the corporations to regain a bit of power, and probably necessitates cloning some fresh agents unless the mission is abandoned prior to a complete wipeout. Encounters are unavoidable, but players can get a bit of an advantage if they are lucky enough to initiate the encounter themselves.

Battles are turn-based, with each combatant slotted into the turn-based order depending on their initiative attribute. Players will usually face off against one to three enemies, though may come across a second batch in places. Each fighter has a shield that usually needs to be destroyed before health starts to deplete. When health does get hit, it usually drops down rapidly, so having an agent able to keep the squad’s shields up is absolutely vital. Status effects are common and utilising them can make an important difference in tougher battles, though the usual swift reduction of opposing numbers is generally the best strategy. The way agents are balanced unfortunately discourages experimentation; it’s much easier just to find a setup that works and stick with that for the entire game. Battles are the strongest point of the game, garnering a decent amount of engagement, but not nearly enough to cover the general mediocrity of the rest of the title. 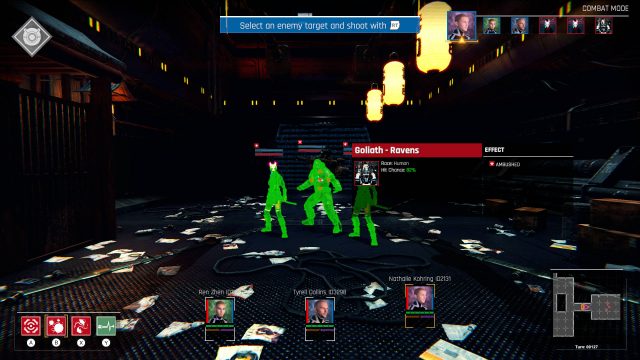 Players will need to be ready to see the same enemies and corridors again and again.

Hacking plays an important role in missions. It can be used to bypass doors without needing to find the key or to collect additional loot, employed via a mini-games that provide a tiny respite from the endless cycle of running back and forth and dealing with encounters. During combat, players can also hack their opponents, which lets them apply one of the debuffs equipped to their hacking tool. Though hacking is a free action, the more useful ones use up a hefty amount of battery, greatly limiting the number of hacks that can be done. Hacking within combat is thus best left to challenging fights, where it can make a significant difference, rather than being omnipresent element of combat.

Conglomerate 451′s implementation of the cyberpunk theme is pretty standard and ultimately forgettable. There’s little to complain about, but at the same time very little of substance to it, particularly as players see everything there is early on. The audio is nothing special either. The sound effects and music are fine but, again, easily forgotten. The AI assistant that accompanies players on missions attempts to introduce some humour, but the repetition is astounding. There’s only so many times one can utter a silly Baldur’s Gate quote before it gets annoying, and the game eclipsed that by a significant factor.

Conglomerate 451 has a solid gameplay base, but that’s really all there is to it and it’s not enough to fully support the game on its own. The combat is decently engaging, but the repetitiveness and lack of interesting elements outside of it means it fails to garner full attention for any extended period of time. Those looking to crawl through neon corridors and vaporise cyborg punks will find some enjoyment from it, but it’s ultimately forgettable.