Questions are bound to arise when one looks at Chaos Wars, something forged in the dark recesses of Idea Factory’s offices and somehow brought across the Pacific. Most non-Japanese gamers, and even a fair number who could experience all the sources of purported fan service this title seeks to deliver without importing, will wonder whether characters are original or from some obscure and forgotten piece of software. Non-Japanese gamers will particularly wonder how this thing was ever deemed a sane use of a company’s resources to localize, though the results of O3 Entertainment’s work demonstrate just how little effort was applied. All players will wonder at times what rule set the game is playing by, a question even the developers would be hard-pressed to answer. Yes, this is the domain of Idea Factory, and I wandered into it of my own volition because I clearly hate myself.

Chaos Wars‘ scenario involves a trio of high schoolers named Hyoma, Hayatemaru and Shizuku. They are sucked into some kind of way station where numerous worlds converge, and then stuck there. Numerous characters from other titles appear to bolster the ranks of the displaced, including the entire playable cast of Shadow Hearts: Covenant and certain persons from Growlanser entries. Together the expanding cast wanders around without much urgency, finding various confounding antagonists and fighting them repeatedly, all in the search for a means back out of this way station.

Titles in which characters from multiple companies converge for a story that cannot be considered canon are rarely masterpieces of writing, but Chaos Wars falls short of even the lackluster standards seen elsewhere. Huge numbers of characters join with minimal fanfare and are promptly forgotten, while figuring out what is taking place can be a strenuous task. This can partly be blamed on O3 Entertainment, which deserved its bankruptcy based on the poor localization work displayed here, but the original writers at Idea Factory clearly did not know how to pace or dramatize this patchwork excuse for a narrative.

On the other hand, O3 Entertainment’s ineptitude is at such a staggeringly high level that it results in the only consistent source of enjoyment while playing the game. The game’s text is bad enough to merely be unpleasant, often obscuring meanings and making it genuinely difficult to figure out what is happening from exchanges that should not be confounding — though certain passages are nevertheless so poor that they warrant a chuckle. It is the now-infamous voice acting of O3 Entertainment’s janitorial staff and unpaid family members that achieves transcendentally terrible status, constantly displaying new ways to butcher delivery. Rare is the line reading that does not achieve atrociousness on a scale that makes it entertaining, and the constant influx of new characters means fresh ways of lamentably laughable dialogue delivery keep appearing. The presence of some passages without voice acting is unfortunate as cackling at the awfulness is the best part of playing Chaos Wars. 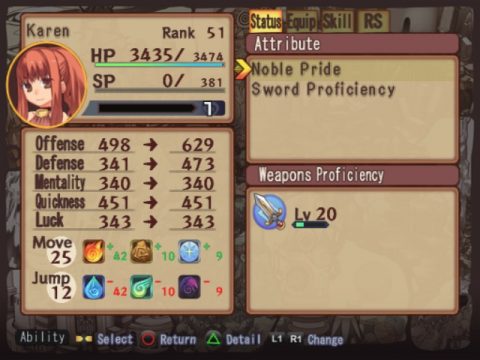 What exactly do all these stats and skills have to do with performance? Idea Factory probably didn’t know either.

In battle Chaos Wars applies Idea Factory’s unique sensibility to tactical combat, though the results are admittedly not at the level of Agarest War‘s wretchedness. Five characters engage with up to eight enemies scattered around several bland-looking boards, and the goal is always to slaughter the opposition leaving no survivors. This task is complicated numerous times when characters who probably haven’t been used much are forced out to fight, and several late-game encounters that pit Shadow Hearts protagonists in single combat against adversaries they are unlikely to be prepared for will demand copious grinding. Compatriots can combine their actions during a single turn provided everyone is in range, leading to much more powerful attacks than a single character could manage. Actions move quickly for the most part at least, which helps keep the proceedings from stagnating too much.

Idea Factory does indeed produce what its name suggests, though many of these notions should have stayed unapplied. Having a circular range in which characters can move instead of a grid seems progressive, until it becomes apparent that figuring out exactly what is off-limits to motion is much harder with this system because of the unclear space being occupied by other things. There is a system involving the phase of the game’s sun that affects damage enemies deal, but as the player has no control over time’s passage and the results are opaque, it simply irritates. A unique concept of impermanent damage is introduced, whereby some of the HP removed are replenished when a character’s turn next arrives: the problem is that the amount replenished is unpredictable and bosses benefit more than the protagonists due to their huge life pools. The amount of damage dealt and received is subject to invisible factors anyway, because Idea Factory considers the idea of a tactical game in which the player can gauge what will happen with some accuracy to be unnecessary. Some techniques will always hit while others have a fair chance of missing, but this seemingly-critical information is never mentioned by the game, making it all the more displeasing to encounter the hard way.

Randomness is the watchword for numerous systems within Chaos Wars, constantly infuriating the player. Each character has up to ten techniques for immediate use, but unless they are locked down the game may just randomly change them for something else. Seeing this happen to enemies too is amusing, but losing a key ability and getting an inferior one during a heated encounter does not sit well. Certain optional missions involve sending out characters on a mission that takes place entirely offscreen, which is randomly successful based on factors invisible to the player. The contents of the game’s shop are randomly determined, and the only way to shuffle them is to leave headquarters for a mission and return. Many of the battlegrounds appear to have come from a random generation machine, given their odd layouts that only matter because enemies are stupid enough to get stuck in corners instead of going around nonsensically placed obstacles. Multiple counterattack skills that seem applicable all the time activate in unpredictable ways — particularly unfortunate if one is trying to estimate what a boss will do. Characters also gain statistics more or less at random, though hitting things of a higher rank is more likely to result in an increase.

Navigating Chaos Wars‘ menus is not for the faint of heart. Most of the necessary information is provided, but uncovering it demands sifting through multiple text boxes. New equipment tends to come with skills of some kind, which thanks to O3’s uninspiring localization usually have descriptions that don’t make sense. Characters also have a wide variety of techniques that depend upon having the correct weapon type equipped, and if a forgetful player changes someone from a gun to an axe or some other style of armament, most of the moves currently in place will do absolutely nothing. The sheer size of Chaos Wars‘ inventory is bothersome too, as every battle produces rewards which are mostly outdated flotsam with no purpose other than to be sold. 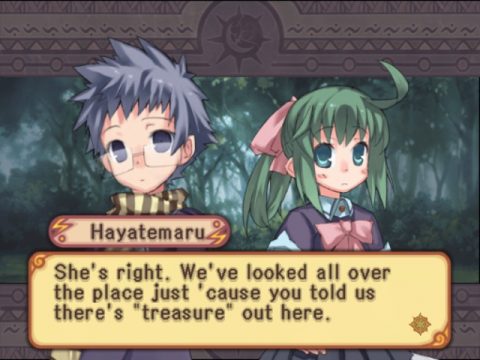 Worry not, intrepid player. The dialogue will waste no time in becoming less intelligible!

Difficulty in Chaos Wars is a changeable thing, veering wildly from battle to battle. While being forced to use characters who are normally benchwarmers is never helpful, the game’s strange method of calculating agility often means that certain participants act multiple times before others get to do anything. Even bosses can have randomly bestowed techniques or skills, cementing the unpredictability of what will be seen. Chaos Wars also lacks a clock to measure just how much time is being spent with it, though sixty or so hours is a reasonable estimate of how long completing the thing takes.

At first the music of Chaos Wars is serviceable and catchy, since it features compositions from many different games. The game’s own theme song rearrangement is unfortunately featured far too often, gracing every between-battle screen and preparation for a sortie. Chaos Wars also sports one of the worst renditions of “Night on Bald Mountain” ever created. As for its visuals, they are cute for a time with solid spritework, but the lack of enemy variety starts to bore long before the conclusion.

Anyone interested in the sublimely stupid voice acting of Chaos Wars can partake of huge samples on YouTube. Nothing else here is worth experiencing, not even from Shadow Hearts and Growlanser fans desperate for something else in those series to emerge. Idea Factory lived up to its reputation with this one, and anyone not horrified by that statement needs to seek help immediately.