After playing through a bit over thirty hours of the game, it’s clear that Persona 4 Golden feels right at home on PC.

With the last major RPG release of the PlayStation Vita gone and done, we are seeing its darlings find their way to other platforms. Atlus’ Persona 4 Golden is the latest title to receive that treatment. One of the biggest RPG successes of the much underappreciated handheld, the game has suddenly emerged on PC via Steam, giving another generation the chance to investigate the Shadow World and unmask the nefarious party using it to commit murder.

After playing through a bit over thirty hours of the game, it’s clear that Persona 4 Golden feels right at home on PC. The performance is generally excellent, and the upscaled graphics on the whole look very nice, though there have been a couple of crashes so frequent saving is recommended. A few background elements are more noticeably blurrier than others, but the upscaling is otherwise great and the art style and UI elements hold up superbly. There’s a slight weirdness initially when seeing some of the upgraded character models’ faces remaining completely static, but this wears off very quickly and it’s easy to feel right at home with the presentation.

Like other titles in the series, Persona 4 Golden puts players in the role of a high school student, this time one who is spending a year in the rural town of Inaba while his parents are overseas. He is placed into the care of his uncle, Ryotaro Dojima, who has a young daughter called Nanako. Even before he gets to Inaba, however, he has an encounter with the enigmatic figure Igor, who informs him that he is fated with uncovering a mystery. That mystery turns out to be a set of murders conducted via an unclear method and seemingly related to the Midnight Channel, a strange “show” that appears on TV at midnight when it rains. He quickly finds some allies in his fellow students and uncovers another dimension accessed by stepping through a TV. This dimension plays host to hostile beings called Shadows and quickly appears to be the method by which the killer is operating. 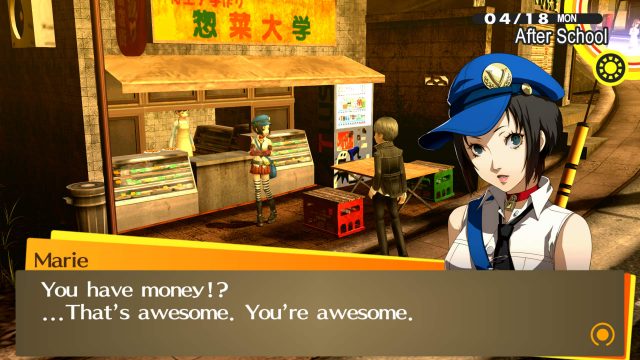 Avoiding the temptation to just flood this impression with screenshots of Marie was a challenge.

Those familiar with the last three Persona games will be comfortable with the gameplay loop. Players spend a large portion of the time in the day-to-day life of a student, able to spend time most days or nights how they wish, such as building up their relationships with an ally or another resident of Inaba or improving their social stats by working or reading. The daytime activities bring together the whole package, building the narrative on top of what’s happening in the main story and making the town feel alive and inhabited by great characters, while at the same time conveying useful advantages for dungeon-crawling in the Shadow World as the party looks to rescue those unwillingly thrown into it. Persona 4 Golden is fairly flexible on time — each dungeon has a deadline of being completed before the next time a heavy fog rolls around, heralded by several days of rain — but players who want to see and complete everything they can will need to have a plan and fully understand how the different systems interact.

Though it’s set only around ten years ago, Persona 4 Golden’s world feels a mile away from the current one. The relaxing rural setting of Inaba certainly feels a little bit weird in the current climate, but then again the ability to return to that setting offers its own solace. Inaba has a great character to it, and the personal conflicts that come up all feel intimate. Persona 4 has always been my preferred setting of the series, it’s great to be able to set foot in that world again. The game does a fine job of instilling a small-town, out-of-the-way feel to the area. 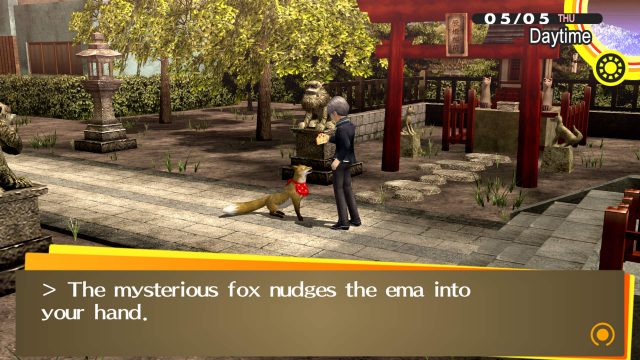 Certain elements feel like a product of the late 2000s, when the original Persona 4 was developed, and even if the large majority have bridged the time gap well, there are some elements that feel a bit out-of-touch now. Though Kanji is still great, its disappointing how Atlus took the easy way out in making him the subject of jokes rather than offering any serious representation for a subset of the gaming community. However, the message of being true and accepting of flaws in both oneself and others on the whole successfully hits home, and Persona 4 is at its best when it focuses on those personal feelings and character maturation, albeit always hedging towards conformity.

The content appears exactly the same in the PC version as it did in the Vita release, and the same goes for gameplay. The familiar turn-based system works well with the importance placed on finding and exploiting enemy weaknesses. Most floors in each dungeon are randomised, with one or two specifically laid out floors where mid-dungeon bosses appear. If they need to exit a dungeon for whatever reason — such as to adjust their current party make up and or request extra healing — players are able to reenter on the floor they left off.

Coming into Persona 4 Golden after playing Persona 5 Royal is still a little bit of a wake up call. Persona 4 Golden’s balance is more along the lines of a standard dungeon crawler, encouraging players to spend their time gaining levels and without many of those party friendly features that ended up making many battles in Persona 5 Royal trivial. Players will want to run through dungeons multiple times for growth purposes as well as to collect items wanted for sidequests. Most are still fairly easy to complete and it definitely gets more welcoming as players can unlock additional abilities through Social Links, but the early portions offer some strong challenges for the unwary. The new PC version offers more flexible difficulty adjustment than the original Vita release. The five regular options from the Vita version are all there, but now players can also adjust specific elements, such as money or experience received as well as retry options. 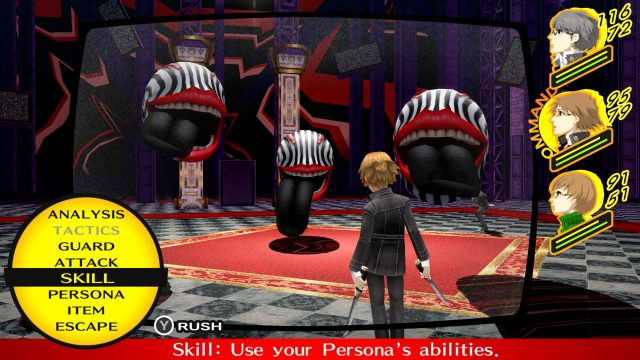 Persona 5 fans will find that Persona 4 Golden offers much less in the way of assistance in combat.

Persona 4′s music is still as brilliant and joyful to listen to as ever. The largely upbeat tracks are massive ear-worms and hearing them in the game again brings back a great feeling. The English voice acting is also, on the whole, great. There’s definitely a bit of the overacting that punctuates many JRPG and anime titles of the era. For those who prefer it, the PC version grants players the ability to switch to the Japanese voice acting if they wish.

Giving more people the opportunity to play Persona 4 Golden is something I can absolutely get behind. Though working through the PlayStation Vita release remains one of my fondest gaming memories, the leap to PC feels natural and the game is right at home on it. I am thoroughly enjoying being given the opportunity to return to Inaba.

Disclosure: This impression is based on a free copy of the game provided by the publisher.