Can I Make an Info-Admin Request?

Calling it Borderlands 1.5 would have been quite accurate, but apparently Borderlands: The Pre-Sequel rolled off the tongues of people in marketing just a little bit more. In terms of gameplay this one delivers what a follow-up to Borderlands 2 logically would play like, and includes a few new mechanics that will hopefully be remembered when Borderlands 3, or whatever its title becomes, shows up. Its narrative is rather interesting as well, although rather strangely paced. While this game is unlikely to convert any who did not like the prior entries in the series, it’s definitely worthwhile for fans of what came before.

True to its title, this Borderlands sets out to detail what happened before the second game. It does this via the framing device of Athena, who was seen in a DLC area of the first title but not in the second, getting interrogated by principals of the Borderlands 2 cast. She then tells the tale of how Handsome Jack rose to his position of power in the Hyperion corporation, since at the start of her story he is still a mid-level drone in the corporate system. In a change of pace, none of the Pre-Sequel takes place on Pandora, instead showcasing the different locale of its moon Elpis.

The Pre-Sequel follows the style of Borderlands 2 for its plot delivery, but the results are a mixed bag this time around. Elpis is an interesting setting full of different things to see, but some of the personalities on its surface aren’t worth the screen time they receive. As an attempt to flesh out the antagonists of Borderlands 2 this tale is a only a partial success. Two protagonists who become adversaries in the second game are significantly more developed here, but the characterization of Handsome Jack doesn’t fully match what he comes to pass. The Pre-Sequel also has a strange narrative structure that seems to start the climax long before the actual conclusion, which becomes difficult to justify when climactic things just keep happening one after another. Much of what transpires is indeed worth seeing, but a little reordering of events would have been useful. One of the possible protagonists is a Claptrap at least, an entertaining choice.

The Pre-Sequel plays very much like its predecessors, as an FPS with significant RPG components. Good reaction time is essential, but trying to take on enemies that are a few levels above the player will take a long time and have no margin for error due to the enormous amount of damage they can deal. It is possible to run up against enemies that are at a high enough level the player will run out of ammunition without being able to finish them off even if every shot hits the head. As in the earlier games, the player is given a few seconds to kill something after losing all HP in order to avoid death, and even failing at that task will simply mean respawning nearby minus a small percentage of the current money. True to Borderlands tradition, respawning will also produce some kind of amusing comment from the responsible device. 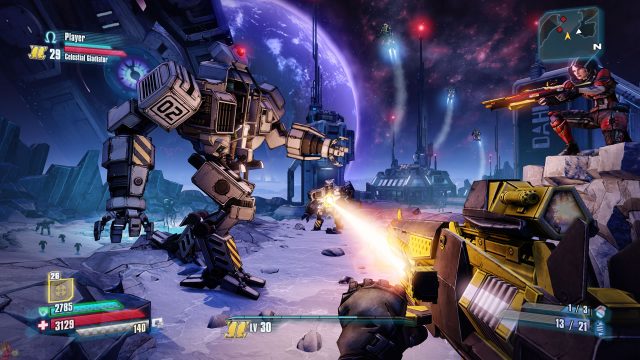 Why yes, that does look a little like an unlicensed nuclear accelerator.

The surface of Elpis has plenty of humans who behave similarly to what Borderlands veterans have seen before, but it is also host to a number of disquieting species that look and behave in unique ways. It is true that some of these species are aggravating in their ability to spawn enormous quantities of additional foes before finally dropping into death, but at least they’re distinct. Elpis also prompts a few new mechanics stemming from its lower gravity that produces a thin atmosphere, which requires a helmet filled with air to navigate. The air can be used to double jump along while preventing asphyxiation, while the low gravity allows higher jumps that can be turned into a ground slamming attack. Adversaries that also require oxygen are vulnerable to the player shattering helmets to produce gradual suffocation damage.

These new abilities are not explained much in the game’s introductory phase though, making their discovery a bit harder than ideal. One aggravating change to the menus is the automatic mapping of huge stretches of areas even when the player has come nowhere near numerous spots, something that makes it much harder to determine where one has already been. Otherwise the interaction aspects are very similar to the extremely effective procedures of Borderlands 2, with intelligible displays and comprehensible skill advancement.

Side quests aplenty will be found here, and while most are enjoyable and afford an incentive to thoroughly explore the entirety of the areas, a few are simply aggravating. One in particular demands the collection of fifty guns for tedious individual deposit at a specific location, a task that will take a long time to complete and clog the player’s inventory, with a mildly amusing sight gag as the underwhelming reward. It is true that most of the missions are enjoyable and those that prove frustrating are still optional, but the dud ratio is still higher than it was in the preceding title. 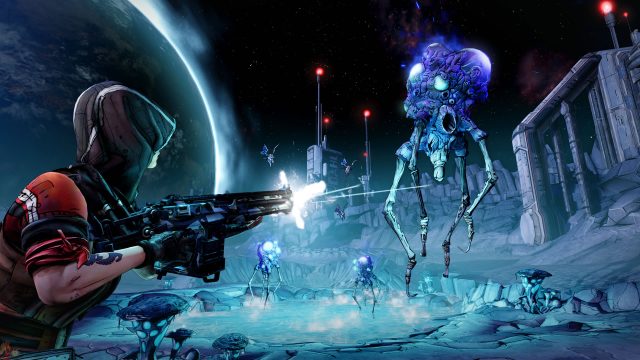 The fauna of Elpis are just as dangerous as those on Pandora, no question!

One large piece of DLC was released, and the Claptastic Voyage is a rollicking good time. It goes through many places within the mind of Claptrap, an unusual and inventive place to be with plenty of new adversaries and insights into the robot’s unusual psyche. Where Borderlands 2 had other large chunks of DLC, this one unfortunately lacks much else. Its other pieces include a repetitive arena featuring mostly recycled opponents from the main game with a few amusing lines from character voiceovers, another arena which can be vanquished quickly and offers nothing but a drill sergeant issuing uninteresting put-downs, and a couple of downloadable player characters that are incessantly advertised on the loading screens. Since the prior game offered both quantity and quality in what its DLC provided, this feels like a letdown.

Visuals are very much in keeping with the prior title, and their quality is about the same — which is to say, immersive but a long way from photorealism. The landscapes of Elpis are distinct from those on Pandora to complement the bizarre wildlife, ensuring that veterans of the series will not be swamped in things that look identical to what came before. Characters on Elpis definitely demonstrate 2K Australia’s local talent in their vocal inflections, but this also makes the place have a distinct feel from the planet below. Most of the music is effective without being terribly memorable on its own, excepting a couple of amazingly catchy vocal ditties heard in the Claptastic Voyage DLC.

It definitely says something about the addictiveness of this series that I managed to put about a hundred and twenty hours into The Pre-Sequel, as it obviously held my attention. It also says something that I then went back to Borderlands 2 and played it some more, while this one has been left by the wayside. 2K Australia definitely did a good job and crafted something that fits into the series pretty well, but it’s not quite at the level of what came before. May Borderlands: The Post-Sequel rekindle the fire.