It would be quite difficult to call first-time developer Thing Trunk anything other than ambitious. Its debut title is only the first in a planned seven-part series of games, each one harkening back to the design of a particular old-school PC game, titled “Return 2 Games”. This isn’t just PR lip service, but is evident in the game’s title menu, which displays a cavernous room with seven stone podiums; six empty and unused at this time, while one supports an open book upon it. Book of Demons, the inaugural piece of this whole endeavor, really has its work cut out to open the door for six follow-ups, and certainly showcases the developer’s ability to keep the player coming back for more, though its gameplay systems do grow a little long in the tooth during its final chapter.

Book of Demons is clearly designed as a love letter to the original Diablo, and introduces players to the Paperverse, a fantasy game world populated by origami-style characters and monsters, presumably meant to be the setting of the further series as it unfolds. Having just returned to his hometown after a long absence, the player character learns of monster sightings and townsfolk mysteriously disappearing, and is sent to investigate the floors and dungeons beneath the nearby Old Cathedral to discover the cause. What follows is a veritable test of endurance for the player’s poor left-clicker finger.

There’s an entire subgenre of games today known as clicker games, where the object is to click or tap the screen as fast as possible to achieve a certain goal. While Book of Demons by no means falls into this category, its gameplay can, at times, feel that way. The hero traverses each floor of the dungeon along a set path, spurred into movement via a mouse click, and moving until reaching an intersection of paths, requiring a further click to continue. Combat commences as soon as the hero comes within range of an enemy, often at a distance of several meters away. This is important because, especially during the game’s latter, tougher stages, dancing in and out of range of enemies by clicking ahead of and behind the hero is a viable way to conserve health while kiting smaller groups of enemies away from the main horde. 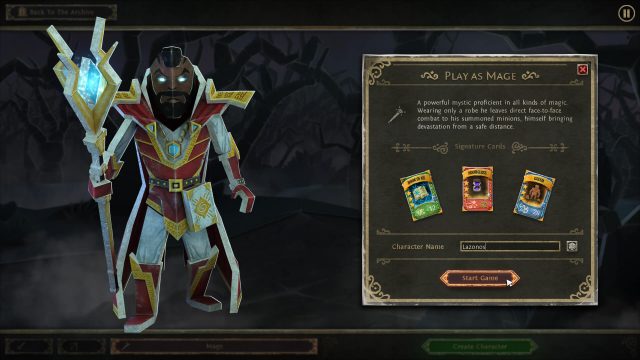 Once the hero is within range of enemies, combat automatically unfolds, with the player character auto-attacking the highlighted enemy at the rate of about once per second. Additional clicking on enemies produces bonus hits, so combat quickly devolves into a veritable clickfest. The reason that close proximity isn’t required for this is that Book of Demons plays fast and loose with the hordes of enemies that must be dispatched at any given time, so a small buffer zone of space can be entirely necessary. Still, some of the late-game stages become so ridiculously choked up with on-screen baddies that they become tests of perseverance rather than fun or nuanced combat — oh, and of course clicking like mad — rather than skill. As any damage done, including boss damage, is perpetual and lasts even after dying and resurrecting back in town, it’s simply a case of dying and chipping away at the enemy mass again and again until it has been diminished. One can even return right to the same dungeon floor after death, with the main penalty being losing some collected loot.

True to Diablo form, collecting loot is what Book of Demons is really all about, though in this game most of the loot either takes the form of gold or cards. Cards come in three flavors — artifacts, items, and spells — with enchanted and even rarer variations appearing over the course of the game, and must be equipped to be used, requiring an open card slot and sufficient mana in the mana pool. Leveling up boosts stats and offers a choice between increasing the health or mana pool, while trips back to town between grinding sessions let players interact with its four inhabitants who can further hone the player’s card loadout for victory. After making some initial progress in the game, two new character classes — an archer and a caster — are also unlocked, both of which may then be played in their own campaign, carving their own individual paths through the dungeons. Later on, additional gameplay modes, remixed floors, and new challenges give the game even more post-game legs to stand on, provided the clicky gameplay hook was enough to convince players to continue coming back for more.

In this manner, much of the game goes by: slaying beasties, grabbing cash and loot, and heading back to town to gear up for the next trip. It’s mostly mindless, but it’s fun enough nonetheless. An option that becomes available before long is the ability to determine how long the current dungeon-diving session should last, which can be useful for those who prefer to play in short bursts, but the ability to head back to town and save the game at any point makes this feature more or less moot anyway. It also becomes a little inaccurate in later levels, where sheer enemy numbers and bad luck with the random-level generator can turn an hour-long questing session in multiple hours and dozens of frustrating “get one hit in and die again” attempts at beating a mini-boss. 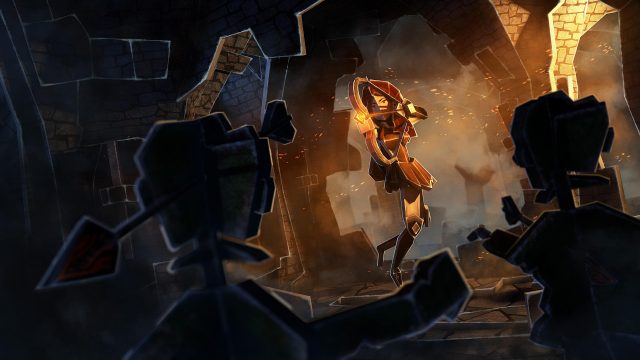 A cinematic camera offering action shots like this would have gone a long way toward elevating the final product.

To poke and prod the narrative along with scattered bits of exposition and world detailing, the townsfolk did receive a decent voice-over treatment, though the barmaid often sounds as though she’s been voiced by Microsoft Mary. While these four benefit from the aforementioned papercraft visual aesthetic, it’s really in dungeon and enemy variety that the gimmick needed to be taken more advantage of. There’s a goodly variety of creatures to encounter, from skeletons to spiders to the entirely unique mini-bosses on each dungeon floor, but due to being zoomed out far enough to show a large amount of the surrounding area, the player is never given much opportunity to appreciate their designs on a visual level. A lot of thought has, however, gone into enemy abilities and how they can be countered with gameplay, whether that means striking at a specific spot on an enemy to break its shield and make it vulnerable to attacks, or forcing the player to use the mouse to touch stars as they dance around the screen after being tackled to the ground by a charging enemy.

The idea to pay homage to some favorite ’90s games is a sound one, and could lead to an interesting and eclectic assembly of work somewhere down the line, if ever completed. The constant gratification of loot and bite-size gameplay chunks of Book of Demons make it inherently easy and gratifying to pick up and play — a good first step for this ambitious undertaking. But the game, though having a clean and perfectly adequate presentation, doesn’t do very much to put its best foot forward to wow the player presentation-wise, and the finger-numbing clicky gameplay might be just a bit too underwhelming for some to ride this train all the way to its final stop. With the next game in the line-up providing a chance for something different, though, and some first-time lessons learned, there’s reason to hold the faith for what Thing Trunk has up its sleeve yet.