Koei Tecmo and Gust have undeniable experience in the world of RPGs. While Atelier continues to be a staple, the companies are looking to expand upon another series and develop it further from its lukewarmly-received initial entry. A sequel to 2017’s Blue Reflection, Blue Reflection: Second Light follows its predecessor by giving players a party consisting of only female characters. Supported by solid art style, the game mixes dungeon crawling with facility-building and character-bonding in a satisfying way. However, once again its sexualised treatment of teenage characters will cause misgivings amongst many RPGamers.

The story is set in an alternate world shrouded by mystery. Players take on the role of teenage protagonist Ao, who finds herself in a strange academy along with other puzzled girls who have lost their memories. The academy is surrounded by water and mysterious places inhabited by demons, dubbed the Heartscape. Occasionally, new girls appear in the school, and with them appear new locations in the Heartscape. The girls are able to recover parts of their memories — such as important people, activities, and events — by exploring these locations. Led by Ao, the young sorority decides to have fun while they try to recover everyone’s memories and return to the real world. Although the premise looks simple, there is a lot more to it under the hood. Strange events recalled from the girls’ pasts make the story intriguing, amusing, and full of emotive moments. The story also serves as a big existential metaphor, and players don’t need to have played the previous game in order to enjoy the story.

The girls are aided by ReSource, a strange bot who messages the girls using a smartphone app, providing limited but welcome assistance. The girls also use this app to communicate among themselves, enabling Ao to receive requests from them via her phone. These teenagers try to survive by learning how to cook, clean, and tend to trivial matters while exploring the Heartscape looking for materials, answers, and a way out. One of the key features of Blue Reflection: Second Light is bonding. These girls have different backgrounds and interests, but they’ll try to strengthen their bonds and work together as the story progresses. The teenagers are overall well-written and have distinctive personalities and backstories. The story is divided into chapters, having a new recruit and a correlating location to explore as the core of each one. The journey to recover their memories and solve the mystery is mostly fun; the lovely, young characters are great and diverse. 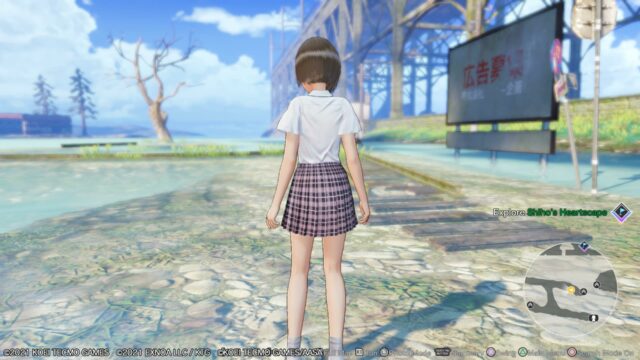 The Heartscape is linked to the girls’ memories.

Ao strengthens her bonds with her teammates by spending quality time with them. While players mostly explore the academy controlling solely Ao, there are times in which one of the other girls accompanies her, with these moments called dates. During these interactions, Ao gets to know the interests and other curiosities of the girls by taking them to certain places or by trying to accomplish something together. Here comes an issue that has come up before: the game elicits the idea that Ao at times tries to relate with them in a romantic way, making all the girls blush constantly and giving players the option to give flirtatious answers. The game goes about showing such interactions in an unnecessary and inappropriately sexualised manner. It creates an odd mixture of innocence and romance, which ends up making Ao seem like a pervert and the game not one that feels safe to play publically. Those who feel uncomfortable with this aspect will suffer a lot because dating is a core aspect of the game. By dating, Ao and her friends gain Talent Points, which are used to unlock new abilities, receive fragments that can be equipped to power up during combat, or get new ideas for crafting or developing facilities.

Besides creating bonds, players are tasked with developing new facilities in the open areas of the academy. These grant bonuses that are applied while exploring the Heartscape. While some of them are needed to progress in the story, others are useful because Ao has the chance to take some of the girls to the newly created facility and have a date with them. The girls have requests, which are sidequests that can range from gathering some materials or killing demons in the Heartscape to developing new facilities, crafting an item together, or helping someone to find a place for a particular purpose within the academy. These requests give players other things to do besides the main story and are usually pleasing.

Another key features of Blue Reflection: Second Light are crafting and cooking. Crafted objects are needed for creating new facilities, and food can be used while exploring the dungeons or battling to recover health or receive other fighting bonuses. Crafting can be done by four girls at the same time, with each contributing with abilities that can make the outcome better, such as getting more final products. The necessary components to craft can be found mostly in the Heartscape or dropped by enemies, but others can be obtained as a reward for completing requests or scattered in the academy. Crafting is compulsory to progress in the story at times and is also a fun activity. 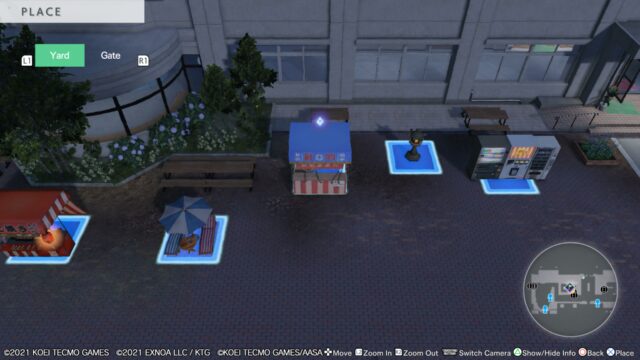 The Heartscape is inhabited by hostile demons that make exploring a dangerous enterprise. The girls have rings that can become powerful weapons when they are combined with their emotions letting them unleash their powers as Reflectors. Since the Heartscape is also full of resources, searching for materials is one of the most common activities. Each location in the Heartscape features different demons, obtainable materials, and memory shards for each teen. Players can enter Stealth Mode to avoid facing enemies or use it to attack them from behind and gain an advantage in battle. There are some requests that force players to reach certain locations without being noticed by enemies. These stealth missions are very entertaining and refresh the overall gameplay.

Even if Stealth Mode is not activated, enemies are shown in the map and move in limited areas, making most of them easy to avoid. Blue Reflection: Second Light includes a real-time battle system that pauses when one needs to choose abilities. Combat features three active party members and one support character, with a bar at the bottom showing friends’ and foes’ recovery of Ether. Abilities cost a certain amount of Ether, 1000 points at minimum. Players can choose to use an ability as soon as the bar surpases 1000, but they can wait to collect more points to use two abilities at the same time or an ability that costs more points. Players fully control the central character and can either manually control the other two or let the AI take control. While the other characters will fight freely in auto mode, players can also directly order them if they haven’t spent their Ether. The supporting character automatically uses abilities to aid the other three fighters and can also be given orders to use an item or swap with another character. After obtaining a certain amount of Ether, the girls are able to shift gears, powering-up and unlocking certain abilities.

The essence of the battle system is to create combos. Each time the combo count increases, the damage multiplier raises, making each consecutive attack stronger. Powerful foes are able to reset the combo count with certain attacks. Luckily, there are some abilities that can prevent the combo from being reset. There is also an elemental system, and enemies are resistant or weak to certain types of attacks, with each girl having distinctive strengths. In addition, there are status ailments that also affect the effectiveness of attacks. Bosses grant the chance of having one-on-one battles, where one of the girls faces the enemies solo for a limited time. During this time, players have four actions — attack, dodge, counterattack, or use a special ability — and can inflict a lot more damage than in regular combat. There is a standard experience and attribute-boosting level-up system, but players can also improve the girls’ capabilities by spending Talent Points, with bonuses such as 10% more health or 3% less damage taken. Players are able to equip fragments that grant stats bonuses or abilities as well. The battle system is simple but very fun, and the Talents and Fragments systems match it neatly. 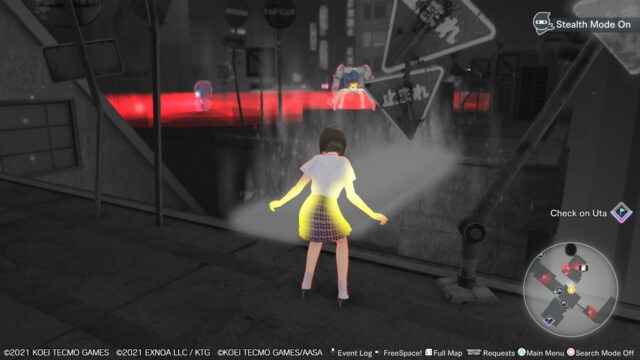 Players can see enemies’ field of vision when Stealth Mode is active.

Visuals are one of the most remarkable traits of Blue Reflection: Second Light. The game even includes a Photo Mode that allows players to portrait their heroes in different ways and poses. All places have well-thought details, and the Heartscape features elaborate dungeons matching the memories of each character. The girls are lovely, have great battle suits, and have peculiar physical traits that match their personalities and emotions. Players are also free to change their characters’ outfits. Nevertheless, this comes with the same issues as the dating interactions, as the girls are given voluptuousness and outfits that exaggerate their anatomy. Elsewhere, the animations, the locations, and the enemy models are solid, though some lighting issues exist along with a strange animation that occurs when one dodges attacks in one-on-one battles. The voice acting is only in Japanese, yet it is solid. The music and sound effects are surprisingly compelling: they may seem simple, but they are tailored-made for the world and match with the visuals perfectly. Ultimately, the mix of the audio and the visuals make the journey a pleasurable experience.

Blue Reflection: Second Light is a solid second step for a new series. It is visually charming throughout and turns out to have an intriguing story with engaging exploration and a simple yet fun battle system. Aside from the fact that the girls are over-sexualized, with odd interactions and some improper looks for their age, the game is surely recommendable. The series looks promising, and surely many players will be looking forward to a third entry.