It has been a long time in the making, but now it is finally done for everyone to enjoy. Some said it would be but a pale copy of Chrono Trigger, others didn’t think it would ever come out. Black Sigil: Blade of the Exiled has kept gamers interested in spite of the countless delays it has suffered. Now that they have the chance to hold it in their hands, players have a new challenge waiting for them: the game itself. So grab your best equipment, a handful of items and prepare yourself for the exile, because it will be a long and hard one.

Players will spend a large portion of their experience with Black Sigil: Blade of the Exiled fighting the numerous random encounters spread through the game. The difficulty and pace of combat can be changed in the settings by allowing time gauges to fill while menus are open, or freezing combat while searching for skills or items. Actions are selected through a ring menu that pops around the characters once their time gauge is filled. Spells and skills are always placed in the same fashion in the menu, so using a certain ability is as easy as knowing the right button scheme to select it. In addition to personal skills and magic, every character has three combo attacks they can perform with each member of the party. These skills and combos are, most of the time, very powerful, if not game-breaking in a few cases. They can deal large amounts of damage, sometimes draining health points as well as skill points.

Several status ailments can hit the characters throughout a fighting scene, and they can easily kill the party if not taken care of, especially if all three protagonists are plagued with two or three deadly effects at the same time. Items must be equipped in order to be used during combat, and each can be carried by one unit at a time. They are also limited in quantity for the encounters, so although you can own 99 of any given item, you may only bring between one to six to use into battle, depending on the item’s power. While they are very useful, if not necessary, in the beginning of the game, they become rather obsolete later on as skills become more powerful and SP increases.

An important aspect of the battle system lies in the space occupied by the different elements of the battlefield, be it characters, enemies or background obstacles like rocks or holes, which hinder movement. Units must reach their target before they can attack or use certain skills and magic spells. If they can’t reach their initial prey, they’ll try to find another one and if no one is around, they’ll just skip their turn and wait for the time gauge to fill again. Character placement on the field is set according to their position in the party lineup, meaning the leader will be placed in front with the other party members behind or next to him. Since the battle maps are so small, fighting can get frustrating when one can barely have a character attack or use any skills at all, as characters will tend to get in each other’s way quite often. When back-attacked, the party is reversed and the last character in line is exposed to the enemies. In narrow battlefields such as caves, space is scarce and reaching remote targets gets harder, so long-range attacks become invaluable. Certain abilities have ranges of effect that take different forms such as a square, a circle or a line. Unfortunately, these ranges are centered around a target and not an area, except in a few cases where the area of effect depends on the distance between two characters using a combo attack together. This concept is interesting, and it certainly supports the developers’ idea of having to move characters around in order to have the strategic advantage, but it is not exploited to its maximum. 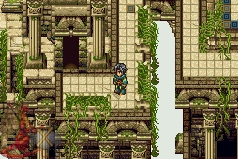 Black Sigil‘s visuals have been carefully polished, and the pixel art is gorgeous. The detailed backgrounds and environments bring life to the whole setting. Details such as books lying on study tables or lined in bookshelves, boxes piled in a corner, meals placed on a dinner table and paintings nailed to walls enrich the world. There are several dozen locations, and almost every one of them has a different tile set and mood to better suit the place. Characters, skills and spells animations are not remarkable but they fill the role they need to. The introduction, however, features some beautiful pixel art imagery showing large scenes not built with tiles and sprites, but feature drawn characters and environments set in perspective. During dialogues, portraits change according to the characters’ emotions, so following the mood of a scene is easier in spite of the limited character animation.

Sound is not Black Sigil‘s strength in any way. Some of the compositions are beautiful and memorable, but most are over-used and sometimes quite short. Unlike the visuals, music gets re-used a lot in the game, to a point where some locations and events, such as battles, can get annoying sound-wise. Unfortunately, musical pieces start over after a battle, so in order to listen to the beautiful world map compositions, one has to stop and listen, or take some time just to organize the party in the menu. Sound effects are also repetitive and rather bland, which makes the issue with the encounter rate even worse; not only is the encounter rate too high, the sounds and animations repeated in combat are nothing to write home about.

The game’s difficulty is measured almost exclusively by the encounters, as puzzles are rare. What begins as a hard game slowly gets easier as the player progresses in the story, up to a point where battles fall on the easy side once most characters have multiple skills and combos for almost any situation. At that point, major bosses can be beaten with a single attack repeated over and over, with no risk of defeat or loss of resources. The game can be completed in thirty to fifty hours, depending on how much the player is willing to achieve in the game, as several side quests are available toward the end of the game.

Party customization is an important part of the strategy in the game, even if the player won’t have to customize much more than every character’s equipment, which consists of a weapon, headgear, armor, a pair of gloves and an accessory. Weapons are exclusive to one character, while most armor and accessories are shared between the party members. Navigating through menus is intuitive, but a sorting feature would have been a welcome addition when browsing through the equipment and items, since the order appears to be random. The several pieces of equipment prove to be very useful, as almost every part offers a certain type of protection, be it of elemental nature or otherwise, or a speed or attack boost. For example, some gauntlets will improve the critical hit or counter attack rates. Thankfully, there’s an accessory that lowers the encounter rate, making it ironically comparable to most other games’ regular rates. As mentioned before, there are way too many encounters in this game. A player who endures them all will be at just the right level to progress without problems, but whether this is a positive or a negative fact is up to anyone to judge, since a lot of fighting will be done in the end. 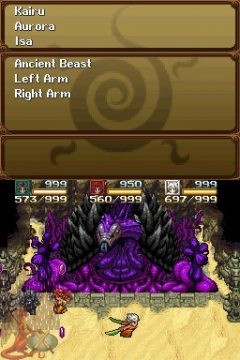 Characters can only be swapped on the world map, in towns or on save points, so the player will want to form his or her party with care, as save points in dungeons are rather rare, if they exist in a dungeon at all. To counter this, reserve characters can still heal the party with magic, preserving the SP of the leading characters. There’s almost no bad combination of characters since about half of them can heal and have a medium or long range weapon.

The bad part comes with the glitches and the crashes. There are certain instances where minor graphical glitches might occur, like when browsing through the menus. These are inoffensive, but the game can also crash in some circumstances. It is possible to complete the game without such problems ever appearing, however. One problem encountered during the playthrough had something to do with being unable to enter commands during the fight. It happened once and happily finished with a well-placed counter-attack, but an unlucky gamer could have lost an hour or more of exploring in a situation such as that one.

Black Sigil‘s story is interesting enough that it can keep the player interested in spite of the problems and the occasional frustrating moment the game brings with it. The plot in itself is not overly original, but it is without any doubt a strong element of the game. The story is pretty much linear, but the pacing seems right and the events are consistent with each other. The plot twists make the game engaging, while the humor keeps it simple and cheerful. The six main protagonists are all very interesting, and have a strong personality that differentiates them from each other.

Back in November, I said “I found my experience to be very enjoyable, and Black Sigil promises to be fun.” Eight months later, I am happy to say that the game kept its promise. Of course, it has a terrible encounter rate, a few glitches and some design mistakes. This is all true, but in my mind, it is not enough to pass on this beautiful, engaging adventure. People who might like it are nostalgic gamers who want the chance to relive the experience that old classics had to offer, because this is what Black Sigil is all about. Gamers who want a fast-paced action-RPG with cutting-edge graphics might want to avoid it and try something else. For the rest, and those who can’t make up their mind, try it and see for yourself. Keep in mind the game is flawed and enjoy it for what it is. Of course the exile will be long and full of hardships, but hard work pays off.