Hail to Whatever You Found in the Sunlight That Surrounds You

I admit, I’m a new fan to the Atelier series. I tried the Mana Khemia games, but couldn’t really get into them. I’m aware they aren’t the same as the traditional Atelier games, but I never played Iris, so this was my only knowledge of the series prior. Funny enough, I thought I’d never involve myself with the series again until I visited NIS America last year and they handed me a copy of Atelier Annie. While hardcore Atelier fans seem to take issue with Annie, newcomers found something new and different from the title that wasn’t apparent in the Iris or Mana Khemia series. NIS America’s latest Gust acquisition, Atelier Rorona: Alchemist of Arland, is definitely a lot closer to Annie than it is Iris, but packs a whole different kind of punch that makes it entertaining throughout.

Players assume the role of Rorolina Frixell, though she’s better known to the townspeople as Rorona. Rorona is an apprentice under the town’s alchemist, Astrid. Although their workshop hardly sees business, Rorona keeps a cheery attitude, until one day when a knight of Arland, Sterkenburg, arrives bearing bad news. Astrid’s workshop will be closed down unless she can complete the king’s twelve assignments within three years. Astrid, who was not present for this announcement but overhears of it, makes the decision to pass her workshop down to Rorona, along with the task to keep it afloat. Although she is a complete novice to alchemy, Rorona rolls up her sleeves with the hope that she can save the workshop and bring happiness to the people of Arland.

One of Rorona‘s main strengths comes from its localization, which is off the wall and laugh-out-loud funny. Rorona, in particular, is a joy to watch throughout the story, as her ditsy and clumsy actions earn her many great moments of hilarity. She’s also supported by a quirky cast of characters, each with their own peculiar traits that makes them worth getting to know. Rorona’s cheerful personality is infectious, and the story’s draw comes from her determination and the support she receives from her allies. This slice-of-life story, while not the most original, is upbeat, charming, and mixed with addictive gameplay that will have players attempting to seek out every story event just to see what kind of trouble Rorona gets into.

The main objective of Atelier Rorona is to complete twelve tasks within three years, each project taking three months to work with. Similar to Annie, Rorona is all about managing time and resources within each of the game’s assignments. Time is a precious commodity in the Atelier games, and outside of the main assignments, Rorona is also called upon by the townspeople and her friends to create various items through synthesis with an attached deadline and specific requirements. Unlike Annie, the requests of the townspeople are not as overwhelming or as frequent, and are often very simple items that require little to no effort to make, while friend requests often take full advantage of what the game’s alchemy system can create. Every action in Rorona, with the exception of taking on new requests, costs time, making it important to watch the deadlines accordingly. Despite the time constraints, the requests in Rorona never feel impossible or overwhelming, making it (mostly) easy to go at one’s own pace. 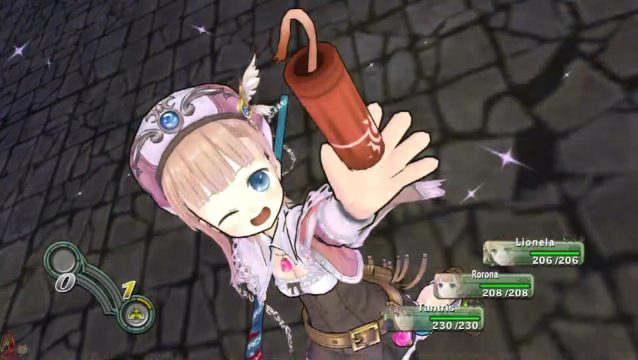 Besides taking on various requests within the town, Rorona can hire some of her friends and go out into one of the game’s many dungeons in order to collect ingredients. It is important to note that while collecting ingredients, Rorona can only carry sixty items in her basket, and none of these items stack. The reason for this is because each item collected has its own traits and quality, which is very important to pay attention to during assignments and in synthesis. Often in the requests, customers are looking for items with a specific trait or quality, meaning that Rorona’s basket can get full pretty fast, with players discarding items of lower quality to make room for better ingredients. While this isn’t a bad thing, it does mean players will have to do a lot more thinking before fusing any set of items together. The finite inventory can be challenging to deal with when there’s so many ingredients to collect, but by the end of the game players will find themselves being more methodical about their ingredient choices to ensure the best products possible.

Item synthesis is by far the most involved aspect of the game. Sporting an easy-to-use crafting system, players will find themselves wanting to create every item possible just to see what kinds of effect they have. Each time Rorona crafts an item, it consumes some of her hit points. HP is very important to monitor in the alchemy process. The number of hit points Rorona loses is dependent upon the number of items she creates. However, the more items created, the more experience she gains as an alchemist. Rorona’s alchemy level increases the more she synthesizes items, and certain items can only be created if her alchemy level meets the criteria of the recipe. Thankfully, this is never a burden, and if Rorona’s HP is too low, she can always go take a nap on the couch for a few days, restoring her HP back to full.

Besides raising Rorona’s alchemy level, players will also have to raise her adventurer’s level. This is done by fighting a variety of enemies at the different gathering points. Combat is a standard turn-based affair, though battles are fairly quick and painless until some of the later dungeons open. Rorona has five commands she can execute in battle: attack, skill, defense, escape, and item. While her companions have the first four commands, Rorona is the only one who receives the command “item,” which allows her to heal party members with items or use weapons that she has synthesized such as barrels, bombs, and statues. This is somewhat problematic in the later dungeons depending on how high one’s adventurer level is, as using skills costs HP, and not all characters come equipped with a healing skill. If Rorona is the only healer via items and falls in combat, it’s best to escape and head back to the workshop or risk being beaten to a pulp. Outside of their special skills, Rorona’s comrades can assist her by either providing a follow up attack, or defending her if she is targeted. Still, in later dungeons, HP depletes very quickly and it can be challenging for the party to stay out in certain gathering spots for too long.

There are many ways to play Atelier Rorona. Players will either find themselves leaning toward focusing more on alchemy or adventuring. Either way, it’s not very easy to do both consistently during the assignments. Both impact the story in different ways, as there’s the potential to miss some story events through frequent adventuring, while performing too much alchemy means that Rorona may not be perfectly prepared combat-wise in later dungeons. How players choose to progress their game is entirely up to them, as different endings are unlocked based on the player’s decisions. This is why more than one playthrough is encouraged: it’s impossible to do everything that Atelier Rorona has to offer in one clear swoop.

Although this is Gust’s first HD game, most people wouldn’t guess that by Rorona‘s visuals, which are stunning, even breath-taking in some areas such as the Night’s Domain or Lake Nabel. They are vibrant, focusing a lot on pastel-colours that give the game’s atmosphere a country appeal and charm. Atelier Rorona manages to make the transition to PlayStation 3 without any bumps, and even the move from sprites to 3D models is exceptionally done. 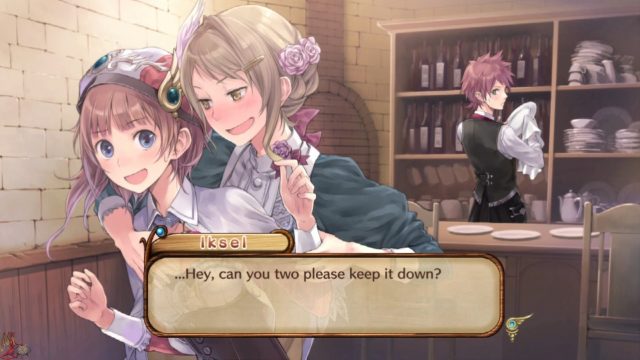 My, you filled out nicely too!

The soundtrack is also a standout feature that definitely coincides nicely with the game’s country setting. Since Rorona is not a combat focused game, the battle themes do not stick out, but outside of that, the game releases top-notch hits one after another. Highlights include the theme of Night’s Domain, which is very haunting and majestic, and the piece played in the Nearby Forest which gives off a light and airy tone. The music fits the setting of the game quite naturally, making both the soundtrack and visuals a triumph.

The same cannot be said for the game’s voice acting, which is somewhat hit or miss. Some characters in particular, like Sterk and Astrid, sound fabulous, while others, particularly Hom and Pamela, sound like nails to a chalk board. Rorona’s voice actress provides a sweet and cheery performance, but has moments where she sounds almost too dippy, which is a bit disappointing considering the game is all about Rorona coming out of her shell. The voice acting isn’t particularly memorable, but it’s not horrendous either. For those who aren’t a fan of English voice acting, there is an option to switch to the Japanese voice track.

Atelier Rorona is by no means a perfect experience, but it’s pretty darn close. The game continues the addictive alchemy-focused gameplay of Annie, while the charm and atmosphere really make the game come alive. Rorona can be completed in less than twenty hours, though in order to see and do everything that the game has to offer, multiple playthroughs will be a must. It’s not possible to do everything in one playthrough, and considering how much content there is to discover, why would you want to? Rorona continues the grand tradition of creating an RPG experience that is all about the simplicities of life, coupled with the usual great cast of characters, and is a complete must for fans of the series.