I have been avoiding writing this review for a while. The truth is that I poured over ninety hours into Assassin’s Creed Odyssey, fell in love with a heroine named Kassandra, and decided that I needed to see her journey through to the end. The Assassin’s Creed series has gone through drastic changes in the last few years but hasn’t necessarily figured out the kind of game it wanted to be. Gone are the days of unforgiving escort and tailing missions, as well as the bogus haphazard mess that was “The Desmond Miles Story.” Instead, a new era has dawned with more roleplaying roots infused, and an open world that is compelling, if overwhelming to explore. While Odyssey is not the perfect package, it offers so much to newcomers and veterans of the series and was the reboot Origins should have been.

Players take on the role of either Alexios or Kassandra, who are mercenaries and descendants of the famous Spartan Warrior, Leonidas. Inheriting Leonidas’ broken spear, the protagonist of the player’s choosing goes on a quest to repair it, while also encountering the sinister Cult of Kosmos who are hoping to infect the Greek world with their demonic practices. With their family in disarray, Alexios and Kassandra attempt to reunite it under Sparta’s banner and dethrone the cult before it is too late.

While the story is simple on paper, it’s hard to deny what an emotional experience Odyssey is. Although the story of lost family is overused in gaming, it’s easy to feel invested in the main storyline because the characters and their support are compelling from the start. One flaw of previous Assassin’s Creed‘s is the lack of emotional investment both in its storytelling and its surface-level gameplay, and Odyssey does a great job of making the player want to explore the world, tag and complete any and every quest they can find, and continue the journey. While the writing wasn’t always stellar, it’s still above and beyond what other games in the series have done in the past. The main story has some awkward narrative hiccups, but the sidequests and smaller objectives allow for more flexible and smaller tales to be told, and those stories were often superior throughout. Many of the sidequests are memorable, some even quirky, but most of all, they are entertaining and captivating to complete. 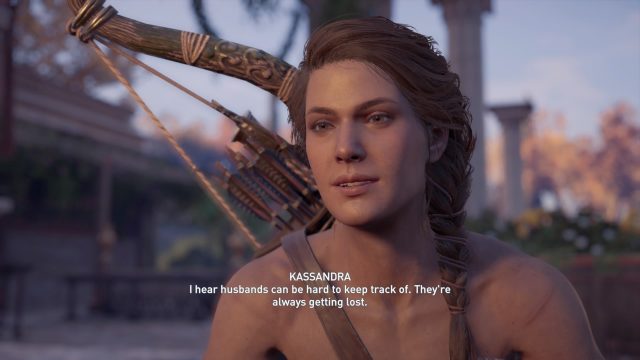 She makes such a valid point about husbands.

Great voice work also contributes to how engaging the world of Odyssey is, as Melissanthi Mahut voices Kassandra and delivers an entertaining performance. It’s clear in how she delivers many of the lines or puts a lot of exaggerated emotion that she is loving the role. A lot of the voice acting present in the game is done very well, and it creates such a vibrant world-building experience. From helping Sokrates in his public forums to Barnabas’ crazed adventures on the high seas, it’s clear that the voice cast was having a lot of fun during the production of Odyssey. The music in the game, though subtle, captures the sense of adventure in Odyssey very well. Even the crew chants on the ship while out at sea are haunting and catchy to hum along to.

While the story and voice work are solid, there’s much more to explore in Assassin’s Creed Odyssey — more than thirty different areas’ worth. Odyssey is a huge game to explore, and as compelling as that can be, it’s overwhelming at times as well. It doesn’t help that many of the areas look very similar to each other, or that there’s too many tasks to complete throughout. It’s easy to have over thirty plus quests logged at any given time, and there’s also the daily quests which are brief encounters that offer mad experience points but are only available for a small window of time. There is also DLC content and other missions — the game is constantly being updated, if excessively so. It’s great to have a plethora of content to enjoy in a game, it’s another to have so much that it bogs down the experience. Odyssey is great at pacing and the player is encouraged to do as little or as much content as they like. At the same time, one must wonder if Odyssey has too much going on in it to know when to quit. It also doesn’t help that a lot of the additional missions feel too similar, making for uninspired quests that do at least boast big rewards.

Combat has also received a massive update in Odyssey, as the player can wield different weapon types, swapping between two at any given time. The player can also work through three skill trees for abilities: Assassin, Hunter, and Warrior. Each tree has its own unique skills that allow the player to mix-and-match the kinds of abilities they want to use in battle. There’s no real benefit to putting points into only one skill set, so it’s worth experimenting with the kinds of abilities that the game has to offer and given how much experience the player gets throughout the game, it’ll be easy to get nearly all the abilities by endgame. Combat is also a much more action-oriented experience, which makes for faster play, offering more options for crowd control situations. Traditional methods of stealth are still very much an option, but the player is no longer punished if a mistake is made compared to the original Assassin’s Creed series. This new combat system is much more newcomer friendly, and the changes are quite welcome. 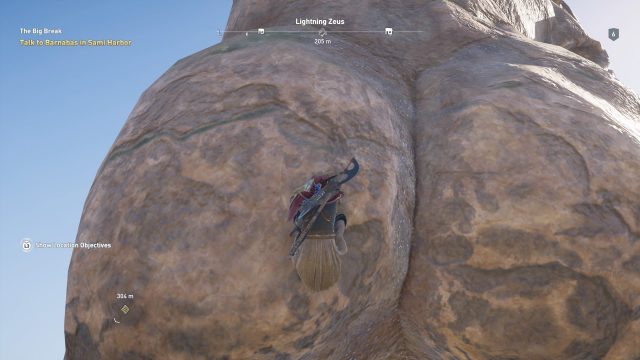 Despite some of the environments looking almost too alike, one cannot deny how graphically breathtaking Odyssey is. There is so much gorgeous landscape to explore, so many large statues and mountains to climb, that it’s easy to get swept up into a moment of awe when exploring Assassin’s Creed Odyssey. There’s also a lot of attention to detail particularly when exploring many of the game’s historical locations, and the game does an amazing job through the voice of Alexios or Kassandra, to give the player brief tidbits about the Greek world and the transformation it is experiencing amidst the tumult of the Peloponnesian War. These little bits and bobs in the game really breathe life into the world of Odyssey, while being able to soak in the scenery as one explores is a fantastic feat by the developers.

By the time I finished Assassin’s Creed Odyssey, I had clocked over sixty hours. Since writing this review, I’m now in the ballpark of a hundred hours. Odyssey has transformed the Assassin’s Creed series into something that feels new and fresh, while sticking to its roots in some sense as well. While there is no way to perfectly appease the fanbase, I found Odyssey to be a memorable time sink. I got obsessed with hunting cultists, I wanted to see Kassandra find true love and happiness, and I wanted to see what the Greek world was evolving into. I cared more for these characters and the world than I ever did in previous Assassin’s Creed games, and I think that’s part of why this reboot is so successful. Playing Assassin’s Creed Odyssey left me feeling valiant and triumphant as I worked my way up the cultist food chain, and and I was always excited to see what Kassandra was off to discover next.