Metro3D’s plan for Armada would have been strikingly innovative for 1999, offering a console game with online cooperative play as its dominant feature. That aspect was eliminated before release, and thus the single player mode was pushed to the forefront. Perhaps Armada is more entertaining if three friends are available to have a convivial gaming session, but for one person it unfortunately demonstrates why the RPG and shoot-em-up genres are almost always kept separate.

Armada‘s setting is clearly derived from numerous science fiction novels, but is unusual in the video game world. Humanity split apart over thousands of years into six distinct groupings in space with concordant mistrust and faction making. All six entities are forced into cooperation when the eponymous Armada appears to attack all humans in space. The jockeying for power and influence between the human factions which do not always agree on the task at hand, coupled with the actual motivating factor of the Armada, could have made for a fascinating narrative.

Unfortunately that did not come to pass. The game begins on a planet where a number of other ships are around to aid the player in taking down a large Armada entity, and these single occupant ships stick around for the rest of the game. The things their pilots have to say change after every mission, and talking to them is the only way to learn about missions in the first place, but no other plot will ever be divulged in the game. These people magically learn about events elsewhere in the galaxy without leaving the comfy environs of an atmosphere, and then it’s up to the player to go into space for the grunt work. 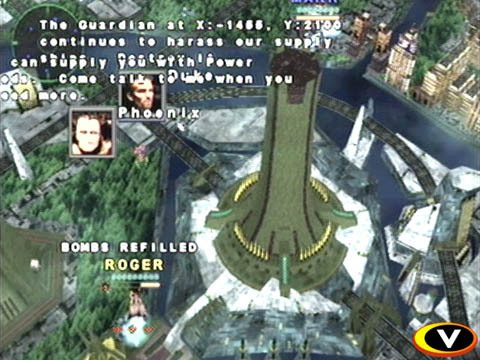 Yay – the one location where people actually talk to me! Get used to it.

Armada plays like an overhead view 16-bit shoot-em-up with an enormous region of space to explore, except for an odd twist. Instead of the ship moving automatically the left or right trigger button must be held down to engage its propulsion, and the ship retains a little momentum after the forward force is removed. This system makes controlling movement rather more complicated than the typical shoot-em-up, and makes no real sense when the ship somehow comes to a stop in the dead of space away from any gravity source. The result is a ship that takes concentration to control, and since bumping into enemies as a result of the drift factor does inflict damage the learning curve can be bothersome.

The ship has two methods of attack, aside from accidentally destroying Armada ships through head-on collisions. Simply blasting away with its gun takes a little more thought than the usual shoot-em-up because of an energy charge that quickly depletes — this means that holding down the A button to unleash a stream of bullets doesn’t work, and timed bursts of fire are the way to go. The ship can also unleash bombs, which work exactly like they do in most shoot-em-ups. The player has three lives with which to accomplish every mission, but they only mean that after being shot down thrice the ship is booted back to the starting planet with no further consequence.

Accomplishing certain missions is not possible at the beginning of the game, due to the pitifully weak statistics of the ship and the constant spawning of fresh Armada vessels to bedevil any attempt at getting bosses alone. The RPG element of the game springs into effect when seeking to become more powerful, as the aliens bequeath experience when slain. They also relinquish money, but since grabbing the credits requires running them over with the ship, filling the wallet takes much more effort than is ideal. The solution to any mission that presents an unassailable challenge is therefore the one common to many an RPG of grinding for awhile, and it won’t be quick when the experience necessary to go up a level seems to increase at a geometric rate. 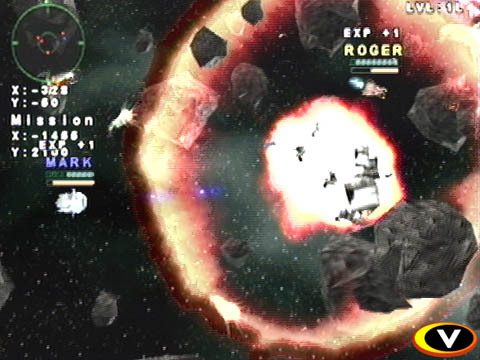 A disappointingly large number of enemies fizzle out with wimpy explosions. Big booms like this are a rare treat.

The missions themselves fall into three equally bland categories. First are variants of the usual fetch quests in which the player has to buy an item before bringing it to the new locale, second are missions in which some Armada boss must be shot down, and third are assignments to clear planets of the Armada by shooting down a boss there. The difference between the second and third mission type is that assistants often appear in space, while the player will always be alone when investigating other planets, making those missions more challenging. The Armada comes with a fair number of ship types, but slogging through the game still feels monotonous quite quickly due to the dearth of interesting things to do. There is also no real end to the game, because even after all missions are finished the Armada keeps spawning in space. Finishing those missions is fortunately a fairly easy task, because the game will not recognize anything but the official Sega VMU for saves, meaning anyone without one is compelled to play the whole thing without turning off the system.

The visuals don’t help matters. Space looks like a giant bland mass of dust clouds for the most part, and stopping in place reveals that its components don’t even move until the player starts doing so. Everything onscreen is very small, especially a few obnoxious Armada ships that divide into smaller pieces once destroyed. To say that the visuals fail to push the Dreamcast hardware is rather akin to saying Jar Jar Binks got on some people’s nerves — while accurate, it understates the case quite a bit. At least the audio is acceptable, with limited but solid voice acting from all the humans and pleasant music. One oddity of the sound design stems from how often the Armada ships emit Wookie roars when struck, which is just plain strange.

Armada really suffers from its release at the cusp of online console gaming. Had it come out a few years later, downloadable content and updates could have turned it into something that came closer to its potential. Unfortunately Armada is left to subsist on the material its disc provides, and it doesn’t have enough of that to warrant more than a cursory look. In the annals of RPGs blended with shoot-em-ups Sigma Star Saga is a better bet, even with its own plentiful issues.