When Generation of Chaos was released on the PSP last year, it met with a largely unfavorable response from gamers, who found it difficult, obtuse, and poorly produced, among other things. Aedis Eclipse: Generation of Chaos goes a long way towards rectifying the series’ more serious issues, resulting in a game which does a much better job of capitalizing on the good things about the Generation of Chaos series. There are still a number of issues that need to be addressed, such as poor voice acting, a fairly predictable plot, and the more heavily luck-based aspects of the combat system. However, the changes Aedis Eclipse makes to the combat system makes it a far more enjoyable, more playable game, one which does what the original couldn’t; appeal to a section of gamers beyond the hardcore strategy buff. Aedis Eclipse: Generation of Chaos is a solid improvement for the series, and is, hopefully, a harbinger of more positive changes to come.

As with its predecessor, Aedis Eclipse‘s combat system bears some resemblance to a board game. Players are placed into a map criss-crossed by roads which connect important landmarks, such as towns, hospitals, and forts, and are given an HQ to defend, the loss of which will result in a game over. Aedis Eclipse takes the basic formula set up by Generation of Chaos and streamlines it, removing a number of the more esoteric and poorly-described commands and mechanics. The combat system has also become a good deal more malleable, allowing players to construct a variety of helpful or harmful landmarks on certain tiles, as well as letting players alter the element of most panels to suit their wishes. These elemental panels play a large role in how individual battles play out, and a number of the tougher stages revolve around altering and maintaining the element of a strategically important panel. Encounters between Captains are played out in the style of an RTS, with two armies lined up on either side of a long, rectangular battlefield. Players choose a formation for their army, which modifies their stats based on what the formation is supposed to do — the Offensive formation, for example, boosts Atk and Int by 20%, but drops Def and Psy by 10% — and the two armies charge at each other, the last Captain standing being the victor. There is significantly less slowdown in battles than there was in GoC, which is definitely a good thing. On the other hand, Aedis Eclipse appears to be using more or less the same AI as its predecessor, meaning most of the actual player input in combat will be the player trying to get their dumb-as-rocks allies to understand what is expected of them. In most of the battles, though, rank-and-file soldiers will be little more than cannon fodder, with the real powerhouses being the Captains themselves. While Aedis Eclipse doesn’t use the Super system that GoC did, Skills have more or less taken their place. Each of the main characters has at least one battle-stopping Skill, guaranteed to make a mess of enemy formations, and although they don’t use nearly the level of flashiness as Super Moves did, they haven’t lost anything in terms of destructive capability. Most of these Skills can be mixed and matched amongst different Captains, but the game also allows players to customize a Captain’s Units and even assign one Captain as another’s partner, giving them access to skills they couldn’t otherwise use. 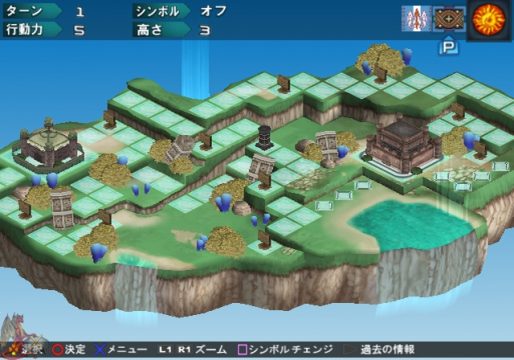 The game is broken up into stages, rather than having one huge interconnected map.

Besides a few minor technical hiccups, the biggest issue with combat is the degree to which luck decides the outcome of each stage. For instance, at the beginning of each turn, there is a slight possibility that a typhoon will occur, skipping that turn. Other possibilities include meteor strikes, which deplete units; earthquakes, which reduce the number of moves that can be taken during that turn; there’s even one random effect which grants an instantaneous level up to one Captain, an effect which could easily turn the tide of battle. Even in individual encounters, whether or not the AI decides to follow a player’s instructions and how often an enemy Captain decides to use their Skills are often the deciding factor of a given battle. The combat system is a highly unique take on strategy games, requiring roughly equal capability in character building and raw strategy, but the best parts of the game are to be had when the player is allowed to match wits with the computer without sudden and often frustrating shifts in status.

Thankfully, the game doesn’t repeat the cardinal sin of Generation of Chaos, that of dropping the player into a complex combat system which isn’t explained or introduced to the player before they are expected to take on a real enemy. The first of the two mainline plots features an easy-to-understand and quite exhaustive tutorial that introduces players to the game’s many features before sending them into a serious battle, a definite help given the complexity of the system. Aside from that, the interface is reasonably user-friendly, though some of the equipment management sections could definitely have used streamlining. The game overall has a few technical glitches, such as lag in menus, and a certain amount of slowdown which, while not as bad as it was in GoC, is still bad enough to be worth mentioning.

The world of Aedis Eclipse is split into three separate and unique plate-like worlds, connected by a huge structure known as the Otherworld Tower. The first of the game’s immediately available scenarios deals with the lowest of the three worlds, an underground realm of high technology, cybernetics, and cloning, while the second deals with the middle world, which is a more medieval setting, replete with shining knights. The last of the three worlds, which players won’t be visiting until late in the game, is a bipolar world of Heaven and Hell, with Angels and Demons constantly vying for control. The two storylines follow roughly the same paths, with the idea of finding and destroying an ancient demon being the main point of the game. The story is somewhat clumsily written, and relies on some very basic RPG and fantasy clichés. The end result is a story that, while imaginative in setting, is so basic in execution that it’s hard to be interested in what it has to say.

Aside from the slight improvement where slowdown is concerned, Aedis Eclipse‘s visuals aren’t terribly different from Generation of Chaos. The game still uses a polygonal backdrop with reasonably detailed sprites, though the overall tone of the design has changed rather drastically. Where Generation of Chaos was almost solely fantasy-based, Aedis Eclipse uses a great deal of technological, almost Steampunk design, particularly in the Lower World. However, even in the Upper and Celestial worlds, a lot of the design comes off as slightly sci-fi. Overall, the disconnect between the polygonal backgrounds, sprite characters, and hand-drawn character portraits isn’t as bad as it could be, but neither does the fractured visual style do much to help the game. 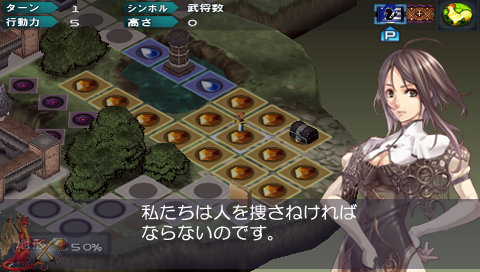 Character portraits are the high point of the visuals.

Possibly the most grating aspect of Aedis Eclipse is the game’s voice acting, which is genuinely atrocious. While one or two of the actors do a respectable job, the vast majority of voices sound so over-the-top melodramatic as to be ludicrous, resulting in an unintentionally humorous delivery. Players do have the option to switch to the original Japanese voices, though they aren’t much of an improvement. The music, on the other hand, is made up of fairly generic rock themes, heavy on the electric guitar. It fits with the slightly Steampunk setting, and although the sharp differences between the three worlds aren’t particularly kind to it, the soundtrack more or less works.

With a complex combat system and a plethora of random, luck-based effects, Aedis Eclipse: Generation of Chaos can at times be frustrating, but most problems can be solved by simple foresight or brute levelling. Both of the game’s mainline quests take about thirty hours to complete, and each have a set of side-quests that present some uniquely difficult challenges, but the game can be completed without even glancing at them.

As with its predecessor, Aedis Eclipse: Generation of Chaos is a game that will appeal most to the strategy gamer. The big difference, though, and what ultimately prevents this game from sharing the same fate, is that it doesn’t exclude the non-hardcore strategy gamer through sheer rock-headed design and inane, pointless game mechanics. Though it doesn’t quite reach the point where it would be recommendable to a wide variety of gamers, Aedis Eclipse goes a long way towards rectifying the worst sins of its predecessor, ultimately presenting a surprisingly complex and yet still playable game. Generation of Chaos still has a ways to go, but Aedis Eclipse represents a big step in the right direction.