To help pass the time on the layovers during my summer vacation, I downloaded several games that had caught my interest over the previous months. One of those was Fushigi no Kuni no Bouken Sakaba, or Adventure Bar Story, to use the official English title. While it first came out in 2011 for the PSP, and then a year later on the smartphone platforms (English and Japanese), my version of the game was adapted specifically for the 3DS, and has been available in Japan since June of 2014.

What does that mean, in terms of gameplay? For starters, all of the character portrait work has been upgraded, and a lot of the clutter in battle or in menus is now split between the two screens, which works quite well for it. The microtransaction scheme of the smartphone edition, never too essential to begin with, has been completely stripped out, with nothing lost in the experience. Other than that, ABS works much like any game in its subgenre, which is the meister RPG.

Meister RPGs, in Japanese parlance, combine aspects of shop simulation, character-driven visual novels, and role-playing games. Some of the oldest examples go back to the SNES era, but the series that best defines the subgenre has always been Atelier. Adventure Bar Story is neither an Atelier title nor a Gust production, but its lead scenario writer is Shin’ichi Yoshiike, who worked on the WonderSwan Atelier game as well as the first two Iris games, and it really shows in this one. The setup is quintessential for the subgenre: spunky heroine striving to keep herself and her business afloat despite the machinations of a greedy bastard.

The spunky heroine in question is Siela, who with her sister Kamerina operates a little restaurant in the castle town of Masheim. Unfortunately, Kamerina stinks at cooking, and is even worse at accounting, so it lookes like the sleazy Gustave, owner of the biggest restaurant in town, will be able to buy them out easily. Siela’s not having any of that, however, and vows to beat Gustave at his own culinary game. The royal family is currently holding a series of cook-offs to help decide who will be the next royal chef, and Siela’s got her frying pan ready. Gustave has the market cornered on the rarer ingredients, so she and her friends have to dare the wilds in order to get what she needs. 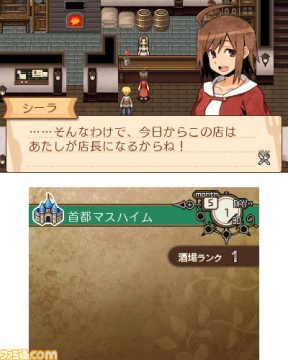 Siela is a textbook Determinator.

Cooking really is at the heart of this game. More than ninety percent of the items to be made are food or drink, and most of the rest are potions with the occasional explosive thrown in. ABS plays out on a day-to-day basis, with one day’s work involving a visit to one site outside the main town, then cooking as much as the player wants (with no time limitations), and finally placing the results on the menu for Kamerina to serve that day. Some items are naturally more in demand than others, while popularity can alter over time. There are even combinations of food and drink that will sell faster if they’re all available on the same menu.

Food is important for more than just its dollar value on the menu, however. All potables and comestibles come with experience gains, and many have special bonuses as well. Dining is the only way to level up directly in ABS, as battles give a different sort of experience that goes toward each character’s skill pool, but does not otherwise affect stats. Very often, the player will have to make a choice of either selling a choice entrée for a great deal of cash or feeding it to an ally for a much needed level-up. Characters can have one special bonus effect active at a time, ranging from simple stat boosts to elemental defenses to auto-revival in battle. Even the cheapest of fare can be useful if its bonus is good, so there aren’t that many useless items to make in this game. 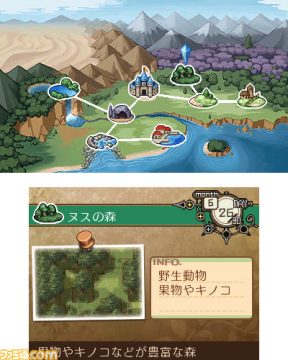 So, what are we scrounging for today?

Recipes can be bought, found, or received from various sources in the game, but they’re not strictly necessary. From the get-go, ABS lets the player experiment with different combinations of ingredients and tools. It’s similar to the Original Alchemy system from Atelier Elie or Atelier Lilie, except that the ABS version is actually well implemented. Many dishes come in sets that all follow the same basic pattern, and for the most part conform to common Japanese culinary choices. While this sometimes results in odd combinations, such as ketchup being a requisite for making omelets, it does make it easier to fill in the blanks of the partial recipes the game provides (based on inspiration from other dishes or things that NPCs mention). With an imminently abusable save/load function available at any time, those who like experimentation and spreadsheets will have fun figuring out the four-hundred-plus combinations. The only real issue is with the recipe list itself, which gets too darn long towards the end of the game. There are options for arranging it by name, by number, by price, experience points, or effect, or even just list the items currently possible to make, but the player cannot combine variables or choose to view a single set of recipes, such as soups or fish courses. This is a perennial problem within the subgenre, and ABS doesn’t handle it too badly, but it is something that could be improved upon.

On the RPG side of things, there are eleven zones of various sizes to explore, filled with monsters, hazards, and occasional bosses. Scattered willy-nilly around these zones are ingredients just waiting for Siela to pick them up. Though not as elegantly done as some harvesting methods in other meister games, the zones are generally longer and more involved than those of the DS Atelier games, with secret passages and hidden treasures to find. At a certain point Siela also gets a fishing rod, allowing her to go angling in different areas and providing another golden opportunity for save/load abuse. 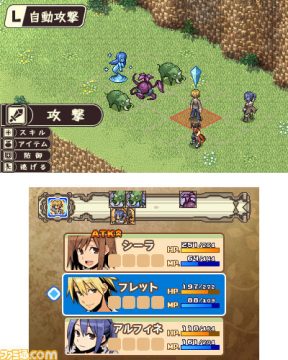 This little piggy got served up for dinner…

Battles are simple, but with some nice refinements to the turn-based standard. The order of action for both allies and enemies is clearly visible on the lower screen, and relative speed does have an effect here. The different characters have their own skill sets, some of them very different, including both general-use and weapon-specific abilities. Since leveling is entirely dependent on dining habits, there’s no use in grinding for anything but specific ingredients, and at any reasonable (i.e., survivable) level, a newly opened zone is going to be a challenge. What’s more, ABS is one of the rarer meister games in that defeat in battle really is a Game Over, so the player must save regularly and be ready to run on occasion. There is an auto-battle function, but unless the party is powerful enough to steamroll the enemy, it’s to be used only sparingly.

Time management is largely a non-factor in this game. While the regular events, such as the cooking contests, run off of a calendar, there are no specific deadlines or even an ending date to the game. Once the story is over, the player can continue the game as a straight management sim with an RPG side, or start afresh. The calendar exists largely to give structure to the narrative and provide a schedule for contests, deliveries, and wandering traders.

As stated at the beginning, this version of Adventure Bar Story features all-new portrait art, but otherwise it’s largely the same. The game sprites are mostly well articulated, especially in battle, but are neither the best nor the worst at what they are. In terms of style and quality, it looks like it could be a DS game circa 2008. The same could be said of the music, which does a good job of providing an auditory backdrop but is otherwise unremarkably fantasy-game in style. The game’s writing is — at least in the Japanese — funny and well aware of its own tropes. There are several instances of gag dialogue poking fun at common NPC conversations, as well as the occasional Atelier in-joke. From what I’ve seen and heard, the English translation of the smartphone release was less than stellar, so let’s hope that an overseas 3DS release, should it happen, will get a revamped translation at the least.

At thirty-some hours to complete the storyline and beat the post-story bosses, Adventure Bar Story is surprisingly hefty for a download title, on any system. In an earlier era it would certainly have gotten a full physical release, and probably a better reception as well. For anyone wishing to scratch that gaming itch with a modernized take on the classic Atelier formula, this would be a game for you.