Creating a flashy time trial jungle gym isn’t enough to have players come back to a game that’s falling apart at the seams.

After largely succeeding in creating a parkour paradise with Dying Light 2 Stay Human, developer Techland is trying to bring players back with story DLC Bloody Ties.  With Bloody Ties players are able to jump back into Villedor and see what has changed since their last visit.  The DLC adds a big parkour jungle gym for players to run around in, a few new characters that are kept at arm’s length, and a bunch of quick fights with minimal stakes.  The main concern is that, much like the base game, the new content is riddled with glitches that have plagued the game since launch.

As Aiden zips around Villedor, a stranger reaches out to him about a group of prizefighters looking to gather strength to attack the city.  He is then tasked with infiltrating the group’s headquarters to gather intel and stop them.  In order to gain access Aiden enters a preliminary tournament, befriending Ciro, one of the other entrants, in the process.  This leads to the introduction of Carnage Hall, where the majority of the DLC takes place, a sprawling gladiatorial arena built out of an old operatic theatre.  Plot and meaningful character development are set aside in favor of mindless, blood-soaked entertainment for the masses who try their luck in the arena.  Since the DLC can be completed at any time, there is little connecting these events to anything else. 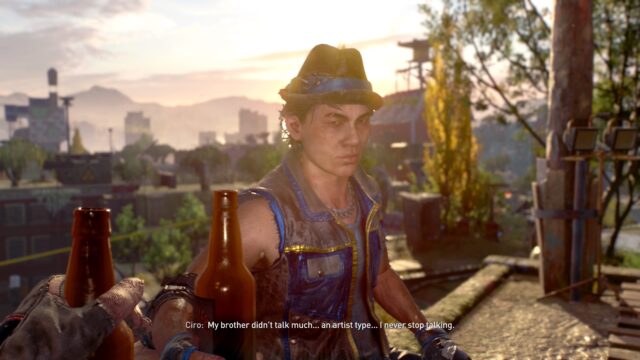 The main story of Bloody Ties revolves around the new characters Ciro, Skullface, Astrid, and Ogar.  Ciro is motivated by the death of his brother Abel at the hands of Carnage Hall’s current champion Skullface.  Skullface’s reign has made the shows darker and more bloody as simple feats of strength turn to ghoulish games where survival is unlikely.  Astrid is the entertainment-obsessed organizer of Carnage Hall, while Ogar lost his son to Skullface and has been estranged from Ciro ever since.  Aiden’s rapport builds organically with everyone but Ciro who is shoehorned in as his best friend, leading to some awkwardly executed moments between the two.  Ogar and Astrid have satisfying arcs and everything is routine but executed well enough.  The issue is that everything feels rushed, pointless, and leaves a lot of loose ends.

Carnage Hall is set up like a giant arena, complete with new vendors, trainers, and sidequests.  The main arc follows Aiden as he completes arena challenges to move up the ranks to eventually get the chance to fight Skullface.  These challenges break down into either combat or parkour-oriented tasks.  Combat challenges are either one-on-one fights against mini-bosses or timed trials against a series of special infected targets.  Aiden is given a set of equipment for each fight, making each of them a simple smash fest.  Parkour challenges are where the DLC shines, as the developers created elaborate obstacle courses and make the most of these new playgrounds.  In one, Aiden mimics the early days of Villedor by having to fight off a never-ending wave of infected to fix the power then turn on a series of generators to make the area safe.  The shine wears off fast as glitches often appear during these elaborate tests; visuals sometimes fail to load properly and further retries of a map can cause additional glitches to appear.  Electric panel covers don’t respawn, causing switches to be visible but not accessible and forcing players to fumble around to find latches to invisible panel covers, being attacked all the while.  The second of the two types of parkour challenges is a time trial where players rush through checkpoints as soon as possible in a tight time frame.  This is a delight as it highlights the best the game offers and since there’s less infected here, the glitches are minimal.

Bloody Ties gives players a taste of every type of quest the base game offers. The only new wrinkle is an optional timed sidequest to save a NPC, during which Aiden can free some prisoners by picking the locks to their cells during the mad dash.  This adds urgency to the otherwise routine task of lockpicking.  Otherwise, the DLC lacks an identity to justify its inclusion as everything it has to offer has already been done better in the base game.  This is exacerbated by the fact that the new characters’ backstories occasionally feel like mere window dressing for the playground of Carnage Hall. 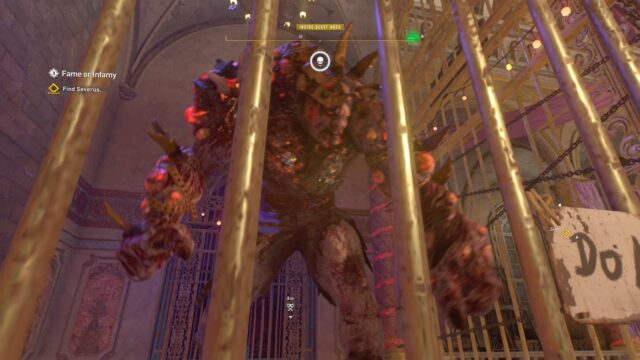 An altered infected being kept as a pet in Carnage Hall.

Bloody Ties on PlayStation 4 suffers many of the same problems the base game had at launch.  Audio glitches still mar the proceedings occasionally as the game can go quiet for around a minute and suddenly burst all the gathered sound effects at once.  AI feels a bit more capable and can attack en masse, but enemies are still prone to occasionally freezing in place.

Bloody Ties has where it lets loose with its soundtrack — one themed arena challenge compares Aiden to Robin Hood and the musical accompaniment is goofy and enjoyable.  These are too infrequent though with most of the tracks blending in with those from the main game.  New vocal performances work well enough with the same flair as the main game.  The playgrounds for the parkour arenas are a lot of fun with the developers finding new ways to spruce up the gladiatorial circus-style maps.  Character designs do little to stand out on their own, and enemy designs feel recycled from the main game.

The developers had a chance to make their game more inviting and interesting with the release of Bloody Ties.  The DLC accomplishes neither as story content is tacked on featuring characters that don’t leave an impression and bugs that continue to plague the game.  Arena challenges can be fun to zip around, but those with a lot of combat are just inviting glitches to appear.  Add in a series of quests done better in the main game and everything may work for first-time players, but leaves little for those returning to enjoy.  Creating a flashy time trial jungle gym isn’t enough to have players come back to a game that’s falling apart at the seams.

Disclosure: This article is based on a build/copy of the game provided by the publisher.