What’s there certainly has promise and the opening chapter sets up an interesting premise that has many possible directions.

Square Enix has partnered with developer Lancarse for a new strategy RPG. The DioField Chronicle eschews the traditional turn-based combat of most strategy RPGs, opting for a real-time system with a more limited party size. RPGamer was given the opportunity to get an early look at the game’s demo, which grants access to the game’s first chapter and introduces all of the combat mechanics while setting up its story.

The first chapter of The DioField Chronicle lasts around three hours. It details the rise of its main protagonists, who end up in charge of the Blue Fox mercenary company in the Kingdom of Alletain. The kingdom has ruled the island of DioField for the last 200 years, but it’s not free from strife with inter-noble conflicts never far away. Not only that, a large-scale war taking place on the Rowetale Mainland means that its abundant supply of Jade — a necessity for Modern Magic — is craved by both sides. Although the conflict hasn’t yet reached the island at the time of the demo, all indications are that it will get directly caught up in the wider war very soon. 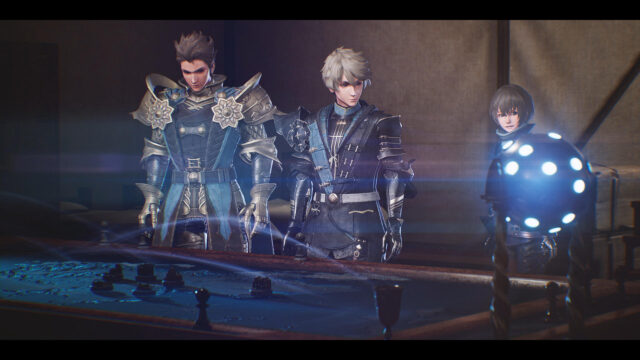 The opening chapter follows Andrias and Frederet’s rise within their new mercenary company.

The main protagonist is Andrias Rhondarson. He and childhood friend Frederet Lester were close companions of Prince Leventia, who was assassinated before entering his teens. Leventia entrusts Andrias and Frederet with fulfilling his dreams of a peaceful and prosperous future for the kingdom. Sometime after, Andrias and Frederet — and their other friend Izelair Wigan — manage to be in the right place at the right time to be recruited into a new mercenary force set up by the powerful Duke Hende. Andrias’s tactical prowess swiftly sees their star rise, and they also recruit two more characters to their cause: the often aloof sniper Iscarion Colchester and esteemed noblewoman Waltaquin Redditch.

The DioField Chronicle’s opening is largely devoted to acting as a tutorial while setting the scene for the game’s events, getting the characters into position for attaining command of the Blue Fox as they deal with largely internal issues such as bandits or disgraced nobles. Between missions, players return to Elm Camp, where they can purchase new equipment and items or upgrade their party through individual and class-based skill trees, as well as potentially activate new side quests and missions. The opening chapter is linear, though players will likely get more options and side missions in future, even if many end up being to ensure the party is strong enough to take on the next story mission. 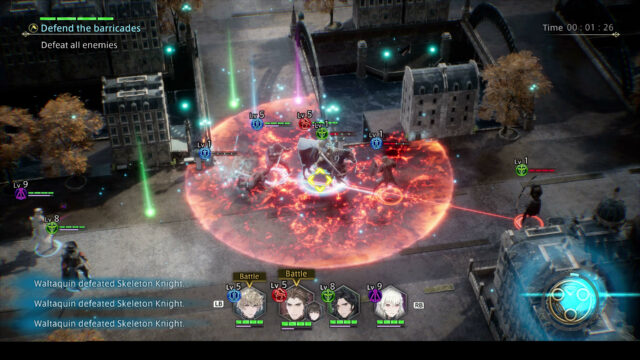 The demo comes with a selection of three difficulty levels, chosen at the start. Square Enix has stated the difficulty can be changed prior to selecting a mission, though the option was not readily apparent in the demo. Each mission takes place on a diorama-esque battlefield. Only four party members are deployed at once, though each active party member can have an adjutant who grants access to additional skills. The game features four unit types — Soldier, Cavalier, Sharpshooter, and Magicker — with each fulfilling a basic battle role, though individual units are differentiated by being able to use different weapon types. The RTTB combat system plays out in real time, with units auto-attacking enemies within their range, but pausing whenever players wish to give out an order to a unit.

A lot of the strategy in the combat appears to come from how players manoeuvre their units. Attacks from behind always deal extra damage, so one will want to get behind enemies while avoiding being outflanked themselves. The DualSense controls on the PS5 demo played for this impression work well, making it easy enough for players to get their units to do what they want effectively. However, the necessity of a restricted party size becomes clear in some of the later missions of the demo, as it can become easy to miss things happening, especially if there’s any distance between the party’s members. Usage of skills also plays an important part; players can use them for powerful attacks or to attack multiple enemies at once, as well as to potentially stun enemies and prevent them from using their own powerful telegraphed abilities.

The most powerful abilities come from Magilumic Orbs, which act as the game’s equivalent of summons. These can be used once players sufficiently charge up the gauge in the bottom-right of the screen. Bahamut is the first one available and unleashes a powerful blast, while the second, Goldhorne, provides emergency healing, with players able to develop further orbs in future chapters. There are also environmental gimmicks to consider. Players can capture turrets to lower drawbridges and destroy barricades to process, or lure enemies towards explosive kegs. Enemies will also drop glowing orbs that restore some health or skill points. 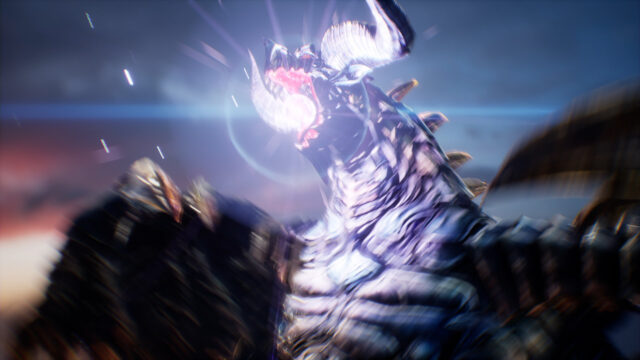 Our old pal Bahamut is available from the outset.

The character models look a little plasticine, but work well enough in motion and fit within the diorama battlefield style. The UI is effective, though it has a propensity to rely on icons rather than effective text labels. All of the important event scenes are fully voiced, while unvoiced lines back at the base often get contextual one-word statements that are a welcome touch. The music is solid and the English voice over’s largely British cast does a decent job with what it’s given, though the early script doesn’t given much opportunity for the talent to shine.

Overall, The DioField Chronicle’s demo does a good job setting the stage for the full game’s launch next month. It remains to be seen if the combat will come with enough variety to get through its run-time, however long that ends up being, but what’s there certainly has promise and the opening chapter sets up an interesting premise that has many possible directions. The DioField Chronicle demo will be available for free on August 10, 2022, with the full game launching for PC, PlayStation 4, PlayStation 5, Xbox One, Xbox Series X|S, and Nintendo Switch on September 22, 2022.

Disclosure: This article is based on early access to the forthcoming public demo provided by the publisher.