With fluid combat and simple but fun puzzles this demo from Steam Next Fest serves as a great introduction into the world.

Good games don’t have to be complex, they just have to play well.  In its thirty-minute Steam Next Fest demo, 3D action-adventure RPG XEL from developer Tiny Roar appears to be an example of this, combining great controls with fluid combat and some basic puzzles.  It builds upon this base with an engaging amnesiac protagonist in Reid, an adorable sidekick robot in Chap, and a lot of great humour.

The demo has protagonist Reid crash land her space ship in a junkyard, waking up with amnesia.  Reid luckily meets a friendly little floating robot named Chap who fills them in on the basics.  She is on the planet XEL, in a junkyard run by a mysterious person who doesn’t like visitors.  In the demo, Chap’s sole purpose is to provide a comedic foil and some exposition through Reid, who can understand its robotic boops.  Reid herself spends the demo spouting one liners while generally being a likeable form of sassy and plucky.  After defeating the demo’s boss, players gain insight into future adventures as Reid meets a mysterious stranger who invites Reid to join them in escaping the junkyard.

After meeting with Chap, the demo gives players an opportunity to wander around and grow accustomed to controlling Reid.  Going off the beaten path through knee high waterways gets the occasional commentary from Reid, but otherwise the path is linear.  The first objective is seeking a weapon so Reid can tear down the breakable wall to the easy exit, which gives players initial time to master Reid’s agile movement and dodging capabilities, with dodging the only element show that is tied to the stamina bar.  Puzzles are simple and allow players to grow accustomed to each skill and the game’s fixed camera angle before, with the peaceful portion of the demo ending with Reid dodging some turret fire. 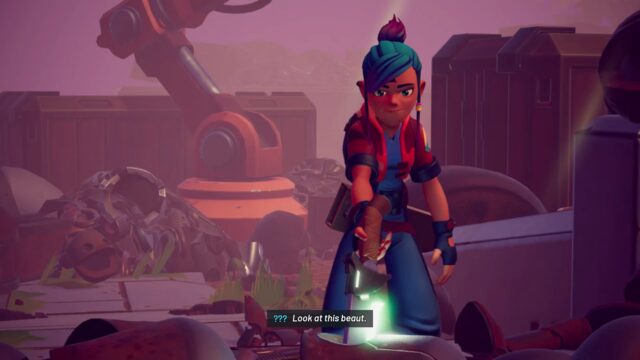 Temptation is high to call this sword Excalibur

After dodging enemies, Reid comes across a blade that opens up a lot more gameplay.  Other than tearing down walls, players can also cut open crates to obtain health, currency and materials.  There are no shops in the demo but the variety of material drops in just this one area hints at a vibrant crafting system to come.  Once Reid is armed, robotic sentries that believe she is trespassing appear to attack in some areas.  These sentries are slow and can be easily dodged or taken out with multiple quick strikes of the sword.  Turrets pop up more often as well but are easily dispatched when within melee range.  When multiple enemies are on screen, players can lock on to one, giving Reid a measured stance and helping slow things down a bit.

The next roadblock to Reid’s progress is a series of turrets in narrow pathways to a keycard.  To make it through this gauntlet Reid needs a shield.  The shield can be held out indefinitely but only blocks directly incoming attacks, being slightly off will still result in damage taken.  It comes into play against the boss of the area, the Overseer, which acts basically as a big turret in an open area.  The Overseer fight has two different stages.  The first stage sees it shoot a homing laser at players that has to be parried by the shield to avoid damage, after which it will overheat and expose its weak point.  When at half health, the Overseer swaps its attack to a beam spread, which has visual cues for where the beam begins allowing players to move or dodge out of the way. 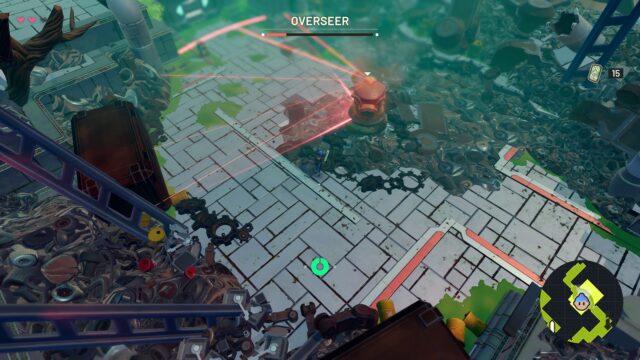 The mission to dodge all these lasers is not impossible

The demo does not get a chance to go over the gadgets or crafting that Reid will be able to do in the full game.  At the end of the demo players are treated to a trailer showcasing some of Reid’s new abilities in different locales.  Some of these include Reid teleporting up ledges to attack enemies or using time-altering abilities to change the surroundings.  Based on fluid the demo performs players should have no trouble mastering.

XEL‘s audio is a mix of peaceful music and birds chirping, contrasted with the mechanical sounds of the enemy and their explosions that underline their juxtaposition.  The game has vibrant visuals in its animation and backgrounds as Reid moves around, with the dimming of light as players enter structures adding a cool touch to make up for the camera angle not showing walls or roofs.  Fixed camera angle issues only come up when trying to reach some crates, with necessitate some blind slashing and running around.  Everything gets an upgrade during the delightful story scenes that give Reid’s personality a chance to shine brighter.  Reid’s voice actress gives her with a sassy confidence, undercut by an edgy sarcasm that shows how distressing their amnesia is.

Between its delightful visuals and a sassy protagonist XEL has a lot of character.  With fluid combat and simple but fun puzzles this demo from Steam Next Fest serves as a great introduction into the world.  Reid and Chap’s antics are something to keep an eye on when the game launches later this year complete with time-altering puzzles, crafting, and further wrinkles.