NIS America announced a dedicated PlayStation 5 version of Nihon Falcom’s action RPG Ys VIII: Lacrimosa of Dana. The game will launch physically and digitally on the console in the fall of 2022. A $99.99 physical Limited Edition is available to pre-order from NIS America’s online store that includes: 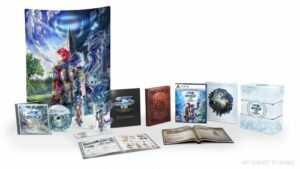 Ys VIII: Lacrimosa of Dana was initially released in North America and Europe for PlayStation 4 and PlayStation Vita in 2017, followed by releases on PC and Nintendo Switch in 2018 and Google Stadia in 2021. The game follows longtime series protagonist Adol (and his partner Dogi) after they become shipwrecked on the Isle of the Seiren. The duo team up with other survivors to try and find a way off the island, while Adol has dreams of a mysterious girl from the past named Dana.