Welcome to Backloggin’ the Year, a feature that discusses the challenges and excitement that come with working through your backlog. Paul Shkreli looks at where he’s at in terms of his backlogging goals.

If you’re reading this, I would like to congratulate you for making it through the gauntlet that was 2021. The end of the year is always a tricky time for me, as I am hit with not having enough time to game due to the holidays, which is then compounded by the endless stream of holiday sales that continue through the end of the year and are somehow still happening three weeks after the first of the year. Before 2021 wrapped, I was able to review ports of Soul Nomad as well as Monster Rancher 1 & 2 DX. Let’s recap the highs and lows of the quest to fight against the backlog.

not a christmas gift, just a masochist pic.twitter.com/4Ev1kNnX33

One of the main reasons I decided to begin this venture was to give myself an opportunity to play some games I missed out on the first time, or give myself a reason to finally unwrap some games sitting on my shelf. Here’s hoping in 2022 we get to uncover some more hidden gems and work through the games I purchased in a panic when Sony announced they were ending PS3 digital sales on the PlayStation Network.

Parasite Eve 2
After getting though the Chrysler Building in my run of Parasite Eve, I knew I needed to give the sequel another try. I returned to my Vita and loaded up the sequel, even though my memories of it weren’t fond. Unfortunately, it appears they were accurate. Parasite Eve II is the sequel that takes everything enjoyable from the original game and leaves it in New York City as it shuffles Aya Brea off to the Nevada desert to investigate sightings of Neo-Mitochondrial Creatures, which are basically supercharged versions of enemies from the first game.

The Active Time battle system featured in the first game is completely gone, replaced by a real-time one instead.  I prefer the battle system from the first game, which provides for more strategy. In fact, most of the RPG elements have been streamlined in this game in favor of a survival-horror jaunt, complete with a very tired and outdated control mechanism that appears to have been lifted from the first Resident Evil game. It’s jarring, feels unnatural, and plays like a huge step backward — especially during the big set piece battles that take place with regularity. 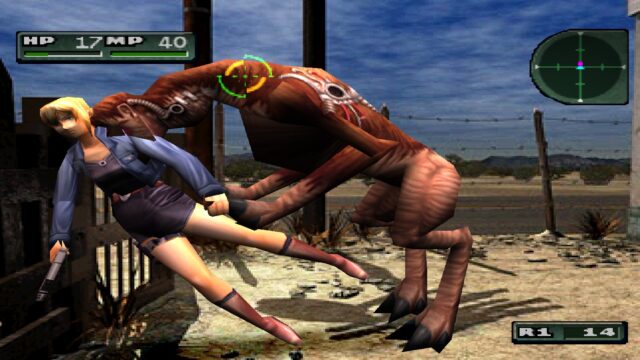 It’s not that the story fares any worse than the original game, as the narrative is not the strong point in either game. It feels decidedly more survival horror/sci-fi than the original game and is again very inspired by Resident Evil. In my opinion, the series lost its footing with the second game. Clearly a third game coming a decade later would enable it to go back in the right direction… right?

The 3rd Birthday takes place in 2013, after the destruction of New York City at the hands of monstrous creatures known as the Twisted. Aya, suffering from amnesia to try and justify the plot, is the only person who is able to use a time travel mechanic known as “overdrive”, where she is able to transfer her soul into another body at a point in time and control it. Using the overdrive system, Aya is tasked with diving into the past during incidents involving mysterious structures called Babels in order to uncover the secrets of Twisted. 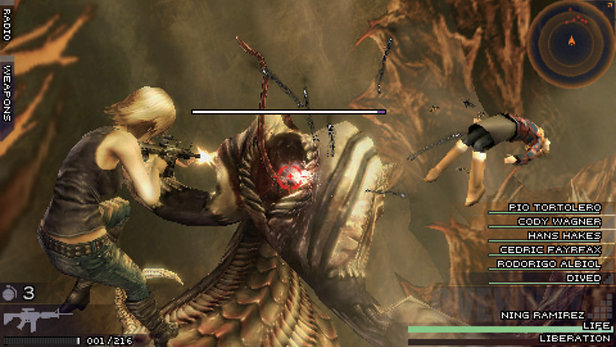 Boss battles can be particularly intense.

The story is a total, incomprehensible mess. Time travel is always a messy narrative to employ but the episodic structure provides a narrative framework that makes it somewhat more digestible, if not necessarily coherent. There are a few mechanics which were unnerving in 2011 and are embarrassing now. For instance, Aya makes some rather suggestive moaning when sustaining damage — it is arguably the most expressive part of the character’s vocal performance. Even worse, as Aya sustains damage, her clothes slowly disintegrate, revealing more and more of her skin. It’s a tasteless mechanic, and one that seems designed for little more than ogling… and that’s without getting into the “obligatory” shower scene.

All in all, The 3rd Birthday fits in this series in the sense all three games are unafraid to shake up the status quo. The three games are so drastically different from each other, both in form and tone. While Aya is the through line in all three games, by the time we get to this game, this is the third iteration of the character with very little that connects them.

Resident Evil 4 VR
I received an Oculus VR headset as a Christmas gift, even though I am not a huge VR fan.  I bought the PSVR headset when it came out and was so overcome with the Medusa-like layout of its many cords that the poor thing has been packed away ever since, without so much as a single case of motion sickness from playing Skyrim.  Maybe I’ll get back on board with the recently announced PSVR2 for the PlayStation 5.

Resident Evil 4 is a classic and one of the best games in the series. There’s a reason why it has been ported as much as a Final Fantasy game. Previously, my favorite edition was the Wii port with the innovative use of the Wii controllers. Now, this VR edition is the one to beat. The graphics are easily the worst part of the game, as the game is almost twenty years old. It’s also a bit annoying when you’re confronting a handful of enemies and three of them are the same character model, but is easily forgiven when it’s coupled with intense gameplay and intuitive controls. Reloading weapons, swiping with the knife, or deploying a grenade all feel incredibly smooth, keeping your trek around the village engaging.

RE4VR does not break any barriers for virtual gaming, but it sets the bar quite high especially for gamers who are resistant to the technology. Now to see if my Oculus becomes more than another dust collector.

Closing Remarks
Thank you for supporting my backlog column during 2021. While we may not have kept track of the games we’ve played, it’s definitely been about the journey than the destination with this adventure. Some of my gaming goals for 2022 include actually playing some of the physical media I own, as opposed to just hoarding it for future generations. Feel free to join me on the ride in 2022, and on Twitter! Here’s a quick preview of what you can expect:

First game on my Series S is a game from 2006 (Lost Odyssey) own it on physical and relieved to see I owned it digitally too. pic.twitter.com/wdHPUSdKbg