Atlus announced Soul Hackers 2, a new title in Shin Megami Tensei’s Devil Summoner spin-off series. The game is being developed for PC, PlayStation 4, PlayStation 5, Xbox One, and Xbox Series X|S and is planned to release in Japan on August 25, 2022, and in North America and Europe on August 26, 2022. The western release will include English and Japanese voiceover options, with English, French, Italian, German, and Spanish text support. 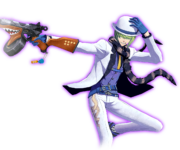 Soul Hackers 2 follows Ringo. She is a Devil Summoner — someone able to command demons to fight using customisable devices called COMPs — aiming to prevent the apocalypse as a war breaks out between factions. Ringo is joined by Figue, who acts alongside Ringo as part of an entity called Aion that watches over humanity. Arrow is a Devil Summoner marked as vital to humanity by Aion. He is killed before Ringo reaches him, but she manages to revives him by interfering with his soul. Milady is a Devil Summoner from the Phantom Society who joins Ringo for her own reasons. Finally, Saizo is a Devil Summoner who acts freely on their own and often serves to calm down disagreements between Arrow and Milady.

The game features a turn-based combat system including regular Shin Megami Tensei elements such as elemental weaknesses. It is being produced by Eiji Ishida (Shin Megami Tensei: Strange Journey) and directed by Mitsuru Hirata (Radiant Historia, Tokyo Mirage Sessions ♯FE). It will feature character designs from Shirow Miwa and music from studio MoNACA.