Monark looks strong in many aspects and promises an enjoyable journey.

Almost a month ahead of its launch, Monark has a demo available for those who want to give it a try. This demo includes the first episode of the game — more or less three hours of gameplay — with the option to transfer progress once the full game releases. With this sneak peek, FuRyu and Lancarse’s game shows that it can be easily discernible from Shin Megami Tensei and comparisons should be avoided. Its turn-based battles are different from what one might expect, and the story includes interesting philosophical claims. In addition, the game has a unique art style that will surely appeal to many RPGamers.

The story is set in an academy covered in a madness-inducing fog that is threatening the well-being of all those who are trapped inside. Players name and take on the role of an amnesiac protagonist who is trying to make sense of what is happening while avoiding madness himself. The protagonist joins as vice president of a newly-formed Student Council group, which comes with the support of the dean, the doctor, and other students. Their mission is to clear the fog and find a way for the students to get back to their former lives. Vanitas, a mysterious daemon that looks like a deformed black rabbit, helps the group by granting the protagonist the Authority of Vanity, which gives him the power to fight against foes in the Otherworld, a dangerous alternate reality that can be reached by using a phone.

Ego plays an important role in the story, and players need to answer questions to define theirs. In spite of having a dominant Ego, players need to raise other Ego stats in order to get some additional powers. This increase can be done by answering psychological tests or by defeating enemies in the Otherworld. There are some humans called Pactbearers who have defined Egos and can form alliances with daemons. The protagonist is tasked with stopping these Pactbearers by breaking their Ideals, physical manifestations that represent their perceptions of the world. In the end, the story seems to be a big metaphor, with interesting philosophical claims about life. The game is divided into chapters, with this first one dedicated to Nozomi Hinata, the president of the True Student Council. The premise isn’t groundbreaking, but the story looks interesting so far, yet there are still many things to be unveiled as everything is mysterious, including the player character. 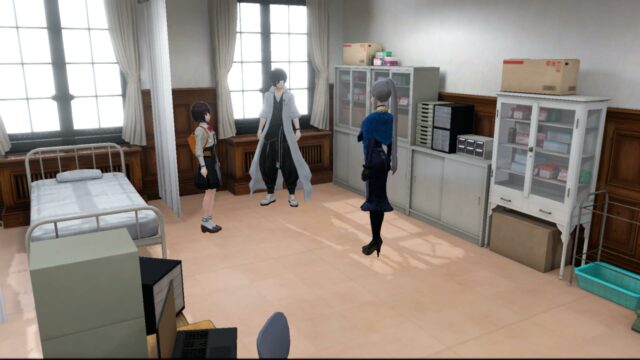 The infirmary is always a safe place.

Players explore the academy in search for answers and Ideals to shatter. They find other characters, items, and notes with clues to solve puzzles that can grant them access to other rooms or floors. If players spend time in places filled with fog, their madness indicator will go up, and if this indicator reaches 100%, they will automatically be transferred to the infirmary. Nevertheless, there are some items that help to reduce madness, and it is not difficult to fully explore a floor without being close to reaching 100% in madness.

At least in what players can find in the demo, enemy encounters are scarce and are not random. Combat starts when players pick up calls or dial specific numbers on their phones, with this happening only in some specific locations. The battle system is turn-based and gives importance to movement and the positioning of characters. There is a wide set of offensive and defensive skills, each with a given range, so characters need to move near enemies or allies to be able to use them. Players can also choose to wait, which allows them to recover health, or use that character’s turn with other members of the party. However, differing turns and other abilities raise madness, and if madness reaches the maximum, the character loses control and dies after three turns. Both foes and allies are able to assist another unit while attacking if they are in range to strike. In addition, players can move around an enemy to know the chance of landing a hit or if the enemy is going to be able to counterattack. Players get a score after each battle depending on their performance: the turns they used, the number of critical hits, and deaths, for example. With only a few battles, it is difficult to tell how exciting the battle system is, but the experience up to this point is pleasing. 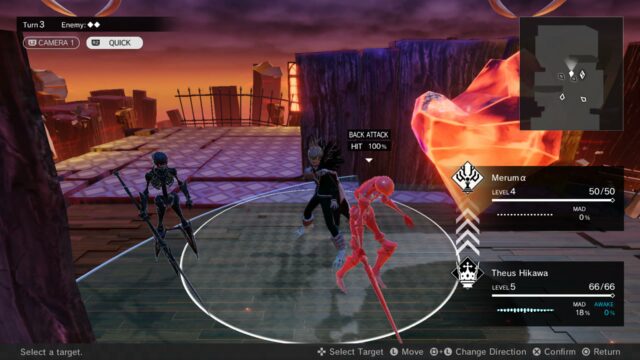 Characters can be leveled up in a semi-personalized way. Players receive Spirit Points after each battle and can also get more by dismantling items or may find some while exploring the academy. By spending these points, players can unlock new abilities, which also level up characters and increase their stats. Each character has its own skill tree, allowing players to go in diverse directions and unlock what they see fit. There are three more companions besides Nozomi, who is the only one that can be used in the demo. Besides these human companions, there is a skeleton ally, which can be personalized and equipped with items dropped by enemies. I’m intrigued to see how the combat system works with more party members and diverse foes.

The visual art is interesting, making a peculiar and constant use of red eyes. The main characters look diverse, and there is an option to change the party members’ clothes that looks promising. Voice acting has been convincing and will probably be at the same level throughout the game. The musical score ranges from jazzy tunes to anime-inspired tracks and has been fairly nice to listen to. To this point, the game has appeared solid both visually and musically, but I hope there is a lot more to see than the academy and the same portion of the Otherworld. In addition, the game promises to have many surprises waiting with the music score since there is an option to listen to tracks from the menu and there are many that have not been unlocked.

Monark looks strong in many aspects and promises an enjoyable journey. The story seems to have many secrets that can make it noteworthy, and the battle system could turn out to be delightful in the long run. Monark will release for PS4, PS5, Switch, and PC on February 22, 2022, with European players getting their versions three days later.