ININ Games, Raw Fury, and Strictly Limited Games have announced that physical editions of Massive Damage’s Star Renegades will be available to order from Friday, August 27, 2021. The game will be available through Strictly Limited Games’ online store in £25.99/€29.99 Standard Editions and £42.99/€49.99 Collector’s Editions on PlayStation 4 and Nintendo Switch. The PlayStation 4 editions are limited to 1,500 copies, while the Nintendo Switch editions are limited to 2,500 copies. The Collector’s Edition includes: 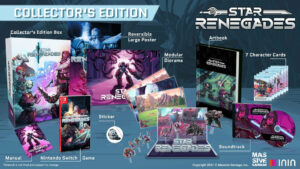 Star Renegades sees players leading squads of soldiers on missions against the mighty robotic forces of the Imperium. The game — which released for PC in September 2020 and for PlayStation 4, Xbox One, and Nintendo Switch in November 2020 — features a reactive round-based combat system, with players able to manipulate the timing of enemy attacks to their advantage.