Though it is an early build, it still feels polished, with good animations and a strong feeling to the game’s combat, which is going to offer players plenty of challenges.

Chashu Entertainment’s Sands of Aura is dark fantasy action RPG that has the high camera angle of Diablo and similar titles but utilises much more deliberate, Souls-inspired combat. The game is being published by Freedom Games and is planned to release on Steam Early Access, and RPGamer was able to check out a brief demo and chat to three of its developers.

Sands of Aura puts players in the role of a member of the Order of Remnant Knights, a group trying to protect what remains of the sand-covered world of Talamhel. Players sail across the sea of sand to various islands, defeating whatever foes they come across. The 30-minute demo takes place in the Ruins of Hurwell, one of the earlier islands in the game, that used to be a vertical kingdom. However, since the world has been covered by sand, players only have access to its peaks.

The demo begins with a quick look at the game’s equipment systems, including the weapon crafting that effectively doubles up as the character build. When crafting a weapon, players have four elements to select: handle, blade, pommel, and codex. The handle determine the form of the weapon, such as one-handed, a double glaive, or a lance and how it controls. The blade modifies the damage dealt, such as the axe causing higher critical damage while the dagger causes less damage but is faster. The pommel provides useful abilities that can activate during combat, such as a chance of spawning a temporary ally that fires projectiles at enemies when landing a hit or granting a 40% speed bonus for the next ten seconds after killing an enemy. Finally, the codex provides a thematic look to the weapon, as well as a special passive bonus. Weapons have a simple linear upgrade system using resources picked up in the game, but there are also gems that can be attached to them, one example being a fire gem that creates a wall of fire when players dodge. 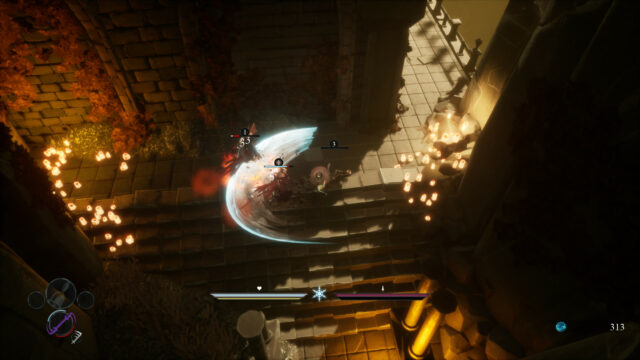 The weapon crafting system offers good variation in the character builds, with more options unlocked as the game progresses. Those selected determine additional elements such as the special attacks, while players can find runes to attach to armor that provide significant passive bonuses, with a talent tree offering further abilities. While there’s no dedicated class system in Sands of Aura, all of the options combine to let players readily build a character that suits a fighting style or a class corollary. Armor is designed to be unique; players will find it in specific spots or as quest rewards rather than being dropped by enemies, and sets will provide useful bonuses.

Combat is very much about being defensive and picking and choosing when to attack; enemies, especially the demo’s boss, hit very hard so just charging in is a recipe for a quick defeat. In addition to the standard HP and stamina systems, Sands of Aura also includes a cleansing mechanic. Stamina in the game only impacts dodging and moving, while cleansing affects attacking. While players attack enemies, their blade will become corrupted and players will need to quickly cleanse it or they will do significantly decreased damage. However, some pommels will reward players for fully corrupting their blade before cleansing it, such as one that makes players invisible for five seconds. On top of the enemy cues, the system ensures players are kept on their toes and pay attention to the state of battle, figuring out when there’s a good window to attack or to cleanse their weapon. Players can also equip an off-hand weapon and swap between the two, giving them a bit of flexibility.

A large bell at the start of the level acts as a checkpoint, and lets players replenish their health and healing options, but also causes enemies to respawn. However, due to the level design, players are able to activate shortcuts such as ladders so they don’t need to go through the entire area again to progress. 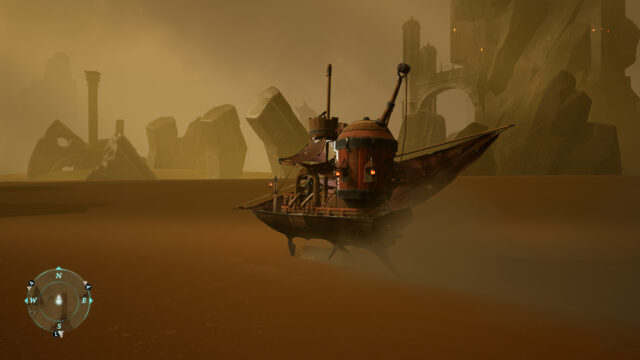 Players use their ship to explore the sea of sand and visit the islands poking out.

As the demo is short and largely combat focused, there wasn’t a look at the overall narrative and world exploration of the game, but the developers provided some insight. Once players leave the main hub of Starspire Refuge on their ship, they sail from island to island choosing to go to whichever ones they can see. The game’s initial Early Access release will come with four main story islands, as well as plenty of smaller islands that have their own smaller experiences or challenges, providing plenty of easily digestible chunks of gameplay.

Players can find numerous NPCs and sidequests on their adventures and are free to help out or ignore their requests as they wish. The game will have multiple endings, and players will also get to make choices, one example being an NPC found at the boss fight who can be brought back to the player’s home island or left to his own devices. The full game is expected to take around twenty to thirty hours, with the Early Access release planned to offer around eight hours of content.

Sands of Aura definitely has a lot of potential and Chashu Entertainment has a good game in the making. Though it is an early build, it still feels polished, with good animations and a strong feeling to the game’s combat, which is going to offer players plenty of challenges. The game will be coming to Steam Early Access and is currently being developed for PC, though the developers hope to be able to create console versions down the line.