Natsume has announced an additional collector’s edition for Harvest Moon: One World. The Diorama Edition will be available via Limited Run Games and include a physical copy of the game for PlayStation 4 or Nintendo Switch, a 5″ tall chicken plush, and a 8″-across battery-powered music diorama featuring the track “Spring on the Beach” and five magnetic figures. The edition will be available to pre-order through Limited Run Games’ website from 12pm Eastern Time on January 5, 2021. 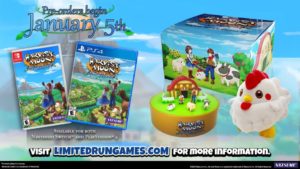 Harvest Moon: One World is set in a world where produce such as strawberries, cabbages, and tomatoes no longer exist, with knowledge of them only found in an old book. Upon discovering the book, players set out on an adventure covering multiple regions including beaches and snowy mountains. The game will release for PlayStation 4 and Nintendo Switch in North America on March 2, 2021, with a European release for Nintendo Switch following on March 5, 2021.