What Romancing SaGa Re;univerSe does is sprinkle pieces of what makes SaGa games satisfying into a lite-RPG gacha experience, and it turns out the two compliment each other quite well.

The SaGa franchise recently received the gacha treatment, joining many of its Square Enix brethren on the mobile platform. Eloquently named Romancing SaGa Re;univerSe—a title that both connects the game to that particular branch of SaGa titles and with an ever-more familiar laissez faire approach to punctuation—it combines many of the franchise’s unique combat mechanics with more conventional gacha systems, such as rolling for characters and strengthening said characters by grinding for a slew of different currencies and items.

The game has been heavily marketed as free-to-play, but not pay-to-win, and as having gameplay that is fun to engage with manually, versus just automating everything as many gacha titles do. These bullet points are likely an attempt to get people who are typically skeptical of these types of games to try it out, and since playing the game since last week’s launch, I would indeed recommend those interested give it a whirl. That recommendation still comes with the caveat that, yes, this is still a gacha game and that, no, this is not going to fully replicate the experience of playing a mainline SaGa game. What it does do is sprinkle pieces of what makes SaGa games satisfying into a lite-RPG gacha experience, and it turns out the two compliment each other quite well.

Combat is turn-based, and each party member has a certain amount of battle points (BP) that they can use to activate special abilities. These slowly regenerate each turn, which leads to strategical decisions about when to spend or reserve BP. Complicating those decisions is the Overdrive and Combo systems. Each character has an Overdrive gauge, which fills both when acting and receiving damage. Holding off on expending each character’s BP on powerful abilities in order to take advantage of Overdrive, as well as creating a Combo between multiple members, leads to some fun combat challenges. On top of all that, party members and enemies alike have both weaknesses and resistances, adding even more strategical depth to the mix. Auto-play is an option, but when automated, party members will simply go all-out, ignoring all semblance of strategy. They are also unable to use Overdrive unless controlled manually. As such, auto is best used when clearing content at or below the party’s level, while content that is on the more difficult side will likely have to be manually completed. 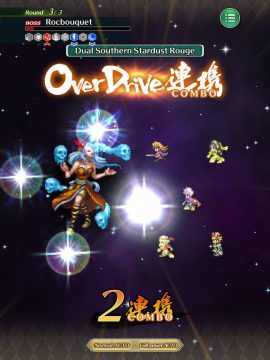 Combat is deep enough to make manual gameplay fun, due in part to the satisfying Over Drive system.

Strengthening party members is a bit complicated, as is often the case in gacha games. However, there is less emphasis on having a slew of different currencies to manage, and more on simply using characters in battle. In traditional SaGa fashion, new skills are learned and attributes are raised within battle. To ease the grind a bit, characters can be sent on real-time “expeditions,” which grant a decent stat and experience reward upon completion. Probably the most potentially frustrating obstacle to progression is leveling characters past level 30. Each character’s max level is 50, but first “pieces” must be acquired to slowly raise the level cap above the initial limit of 30.

The kind of pieces needed depend on the rarity of the character, meaning that maxing out lower rarity units will likely be easier than dealing with top tier units and vice versa, though pieces unique to any specific character can be used in place of generic pieces. Character pieces are acquired by either re-rolling, “training” (another real-time system that can slowly generate pieces), or buying them with in-game currency whenever they’re available in the store. They can also be bought with real-world money. This seems like it would be a pay-to-win trap, but ultimately this system does a good job of balancing lower rarity characters with the more rare variants. In addition, skills earned while leveling up lower rarity characters can be “inherited” by higher rarity variants of the same characters. For example, an A Rank character of the same name can give a single skill to their SS Rank version, which ultimately rewards players for using common units.

At launch, the game contains five story episodes divided into ten chunks overall, which serves as the opening act of the main campaign. It’s a light initial offering, and can be completed very quickly, especially when auto-playing non-boss combat levels. However, there are Hard and Very Hard difficulty modes that unlock after first clearing the content, with much better items and loot to earn. In terms of narrative, what’s there at launch is passable, though overly reliant on classic characters, leading to a feeling of “who, what, where” for those unfamiliar with the franchise. There isn’t much there, though, as story bits are often over in a matter of seconds. The general synopsis is that Polka, a circus kid, becomes a “Grave Knight” capable of delving into mystical dungeons. He begins his adventure after a strange entity crashes a circus performance and kidnaps his sister. It’s possible that the game’s story will improve as new chapters are added over time, but right now it’s hardly a reason to play the game. Granted, fans of the franchise will likely get much more out of it. 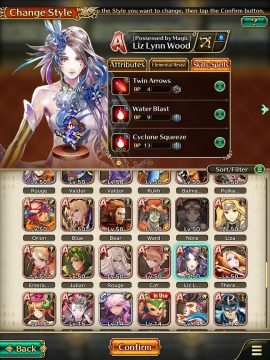 Playable characters are represented by a mix a different character portraits, faithful to the era in which their respective game released.

Presentation is solid overall, with slick graphics and combat effects, smoothly blending 16-bit pixel art with HD backgrounds and ability animations. The soundtrack is a stellar combination of rearranged and classic music from the SaGa franchise. Character portraits are faithful to the art styles of their respective games, which is great, though it does become distracting in visual novel cutscenes during story chapters.

So far, Romancing SaGa Re;univerSe is a solid gacha with enough unique features to stand out on the crowded mobile platform. The gameplay foundation is strong and very free-to-play friendly. Whether or not it will stick around remains to be seen (lest we forget the early demise of Star Ocean: Anamnesis), but it’s worth checking out both as a lite SaGa experience and a compelling gacha grind.