JRPG Study Time: Persona 5 Royal Is a Tower of Mechanics That Never Topples

Welcome to JRPG Study Time, a series following a JRPG newbie and his pursuit of knowledge about the exciting world of said genre of games. Read on as we explore a fascinating web of mechanical evolution and thematic trends through the ages.

Last time, I took a look back at one of the earliest entries in the JRPG genre, Dragon Quest; this time we’re looking to a present-day example of excellence. If the original Dragon Quest represents JRPGs at their most basic, Persona 5 and the additions provided by the Royal version of the game are JRPGs at their most complex. There are decades’ worth of mechanical evolution between the release of these two games, much of which we will explore in the future, but it’s interesting to directly compare a genre’s foundation with one of its most accomplished modern titles. The original Persona 5, released in 2017, was an amazing experience, but this year’s rerelease, Persona 5 Royal, improved the game to a substantial degree. Therefore, that will be the version I reference for this piece. Narrative spoilers will be avoided, so don’t worry if you haven’t played it yet.

There are five pillars to gameplay in Persona 5 Royal: the Press Turn battle system, collecting and fusing personas, exploring both hand-crafted and randomly-generated dungeons, the Confidant social system, and raising social stats through daily activities. If you want to make it neat and tidy, you can put the combat, dungeons, and persona fusing into the “RPG box”, which signifies one half of the game, while the social activities and confidant system go into the “visual novel box”, signifying the other half. That’s a lot of game, and there is a defined learning curve to just about every facet of gameplay. But here’s the thing: every system in this game supports the other to create one masterful gameplay loop. 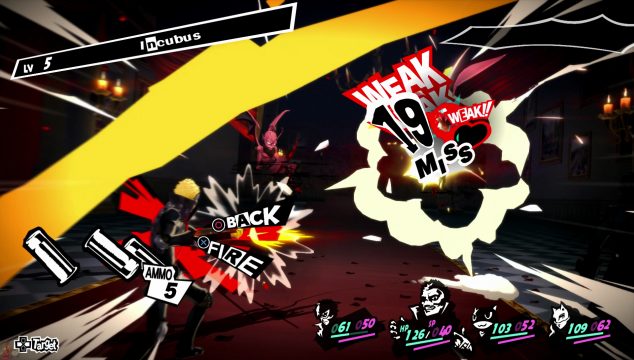 Combat is a smorgasbord of visual effects. But don’t worry, substance is not sacrificed for style.

There is a unique rhythm to combat in Persona 5 Royal. It borrows the weakness exploitation typically seen in the Shin Megami Tensei games (Persona’s parent franchise), but what makes it stand apart is its Baton Pass system. When an enemy is knocked down (either through striking a weakness or landing a critical or technical hit), a party member can extend their turn to a companion. Royal adds even more layers to the Baton Pass system, with extra combat bonuses for every successive pass. These bonuses are upgraded via a new darts mini-game.

What was that I just said? Playing a darts mini-game makes your party substantially stronger during battle? You have just gotten a peek of what makes Persona 5 Royal so special, and so incredibly addicting. Darts is just one social activity the player can engage in. Primarily, you will be doing all kinds of things in your day-to-day life to increase your social stats, which serve primarily to increase your ability to build bonds with people through the Confidant system.

Likewise, improving your Confidant rank with the various people you can spend time with yields a bevy of perks, which can greatly enhance your abilities in every area of the game, such as allowing you to swap party members mid-battle, increasing your capability to level up social stats through activities, or even evolving the persona of each party member. On top of that, leveling up each confidant also significantly increases your ability to create powerful personas through fusion. 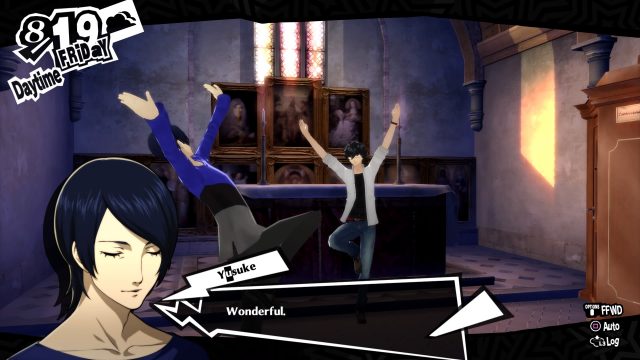 Hanging with your buds improves your ability to destroy your enemies. What could be better?

Success in battle hinges on effectively taking advantage of weaknesses, and achieving that goal is done by creating a strong team of personas for the protagonist by taking advantage of fusion. Through this process, you are able to mix and match various abilities possessed by the fused personas to maximize effectiveness in battle. New in the Royal version of the game are traits. Every persona has a trait, ranging from increased chances of inflicting status ailments to boosting damage done by physical attacks. Just as abilities can be brought over to a fused persona, so can traits, adding another layer of complexity to the chase for maximum power.

Again, that’s a lot. But what does playing the game actually feel like? Everything you do takes up in-game time, and the many story arcs revolve around specific deadlines, usually giving the player between two to four weeks of time to finish each dungeon, referred to as Palaces.

Since such a small portion of each deadline is consumed by clearing required story content, most of your time is spent engaging with the many systems previously described in preparation for the next challenge. It’s in this free time that the game dips its toe into visual novel sensibilities, as you work towards deepening bonds with your many partners-in-crime, with plenty of romantic opportunities to be found in the mix. This is also where you’ll get the opportunity to learn more about your party members, and unlock their full combat potential. 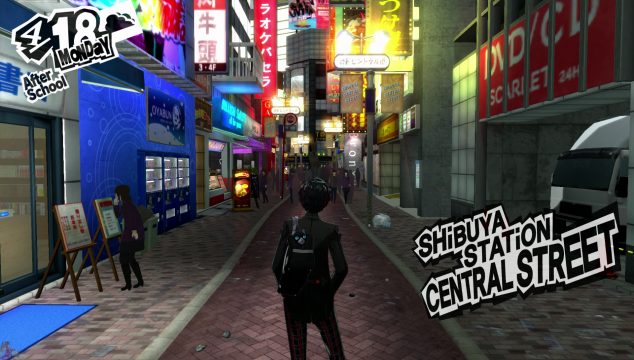 There are a plethora of activities to enjoy in Tokyo, such as loitering at a diner, eating the universe’s largest cheeseburger, and ordering everything on the menu at a maid cafe—all important steps on your journey to become the perfect human being.

It’s also a good idea to spend a day or two in Mementos’ randomly-generated dungeons to grind and complete side quests. This is a great way to earn money, experience, and items made even more worthwhile in Royal with a new vendor named Jose who can boost the amount of combat spoils you earn and sell you rare items, provided you collect enough stamps and flowers as you explore, both of which are easily obtainable as you grind each floor.

It’s a staggering achievement for any game to have as many systems as Persona 5 Royal has and for none of them to feel like they exist just for the sake of existing. It is also a great example of how modern games often fuse different genres together to deliver a unique experience.

Ultimately, Persona 5 Royal represents a much different era of JRPG design philosophy when compared with its retro predecessors, with a focus on delivering multiple complex mechanics and an expansive narrative. What Persona 5 accomplishes that you’ll be hard pressed to find elsewhere is a gameplay loop so tight that, upon being lured in, you may never be able to slip loose.