Giraffe and Annika Heading to Consoles This Summer

NIS America announced that it will be releasing rhythm adventure RPG Giraffe and Annika on PlayStation 4 and Nintendo Switch. The game will be released on the consoles in North America on August 25, 2020, and in Europe on August 28, 2020. A $49.99/£49.99 physical Magical Mayhem Edition is available to order from NIS America’s North American and European online stores and includes: 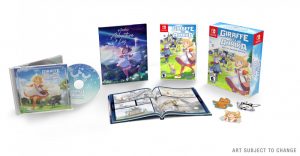 Developed by Atelier Mimina, Giraffe and Annika was originally released for PC by Playism earlier this year. The game follows the amnesiac girl Annika, who wakes up on an island and journeys with the witch Lily and the boy Giraffe to find star fragments that allow her to regain her memories.