In this edition of the column we take a look at Kemco and PQube’s Raging Loop, a mystery visual novel with a lot of death.

At its most basic, Raging Loop is a Japanese visual novel take on the parlour game Werewolf. Players follow Haruaki Fusaishi as misfortune causes him to end up in the remote, cut-off village of Yasumizu with his bike badly damaged in the process, thus preventing a speedy getaway. If that wasn’t bad enough, Haruaki’s presence — already seen as an ill omen by the locals — comes right at the time a mysterious mist descends on the village, which heralds the event known as the Feast of the Yomi-Purge.

The idea behind the Feast is that a number of “wolves” have entered the village and replaced humans. The humans have to select one person to hang every day to try and eliminate the wolves, while at night the wolves are able to kill one of the humans. Additional roles are given to a number of humans to help them: the snake is able to find out if someone is a human or wolf, the crow is able to find out if the person hanged the previous day was a human or wolf, the two monkeys know each other and can confirm that each is human, and the spider is able to prevent a person they select from being killed at night. Thus begins a game of secrets, lies, and politics as the village swiftly descends into violence and madness until either the remaining humans or wolves emerge victorious. 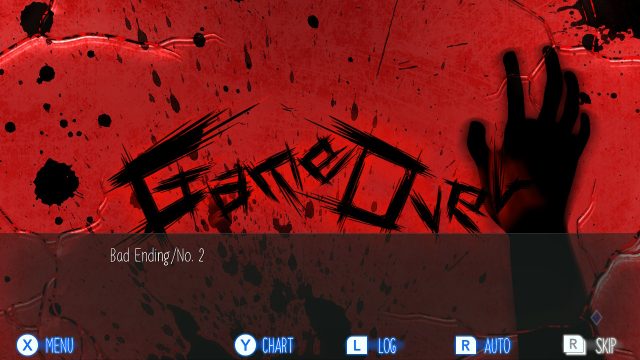 There’s quite a few of these, but they’re required to progress further.

Raging Loop’s route structure ends up being straightforward and pretty linear in practice. As is typical of a visual novel, players pick from certain choices, with these quite often ending in a death that gives Haruaki the keys required to unlock the alternative choices needed to successfully progress. It’s impossible to get lost, even without using the hint corner that actively states what step to take next. The story makes fine use of the narrative elements similar to other games involving diverging timelines, such as Steins;Gate and the Zero Escape series, as Haruaki swiftly meets his first end the moment the Feast begins, but finds himself back to the beginning of the tale with his memories intact, letting him loop back and survive for longer periods, which in turn massively affects how the Feast turns out. Aided by different characters in each of the routes, he learns more about how the Feast works and the deeper mysteries behind it as he looks to escape from the loop. Players are freely able to jump around the route tree to any scene or choice they’ve previously witnessed, so there’s no concern about having to unnecessarily reread swathes of text.

Raging Loop is certainly bloody. Characters are quite literally beaten flat, chopped up, and more, but thankfully the game keeps these situations firmly text-based, just splattering the screen with red rather than showing the actual gore. The looping theme lets players feel more attached to Haruaki’s experience, and sanity is deeply examined, with the game doing a nice job examining the effects that constantly looping and dying might have on a person’s psyche and morality. As a horror title, it’s much more focused on ramping up the tension and mystery rather than providing any jump scares or excessively shocking moments, so it more welcoming to those who are less comfortable with those elements of the genre. Sometimes it does get caught doing a bit of spiritual navel gazing, and the Japanese mythological names can get a bit muddled for those not intimately familiar with them, but Lemnisca’s localisation is strong, while the story itself is thoroughly engaging and the desire to find out what happens next or how things might change is always present. 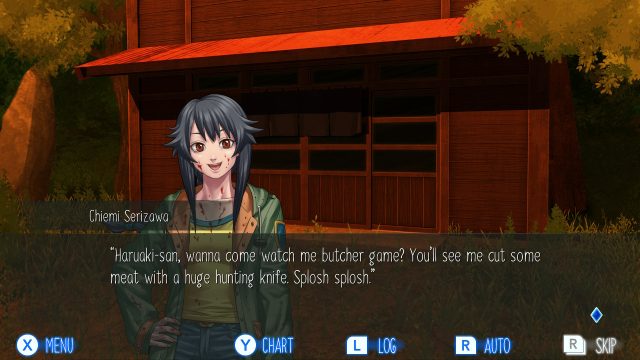 Raging Loop spills an incredible amount of blood, but thankfully refrains from showing the actual gore.

Visually, the game doesn’t try and do too much, but it works well at letting the narrative take full focus and gels well with the isolated nature of Yasumizu. All of the character designs are nice and distinctive, and its use of colour is effective at building up the atmosphere. The Japanese voice acting is solid throughout and the music and sound effect provide good, if unspectacular, backing to events. Once the true end has been attained, which will take most around 20-25 hours, a new Revelations mode is unlocked, which adds character commentary that details further motivations and thoughts, as well as a set of five short epilogue stories.

Raging Loop jumps in high on my list of favourite visual novels. Those who enjoyed titles such as Steins;Gate and the Zero Escape series should find a lot to like in it. Though — as is normal with the genre — there isn’t too much interaction required from the player, it makes great use of both the medium and its storytelling to provide an experience that sucks one in and keeps the engagement level high until the very end.