2K Games and Gearbox Software made a number of announcements for Borderlands 3 at this year’s PAX East. The addition to announcing the game’s second campaign DLC and its spring update roadmap, the companies revealed that the game will be released on Steam on March 13, 2020. The Steam version will include cross-play with the Epic Games Store version.

The second campaign DLC is titled Guns, Love, and Tentacles: The Marriage of Wainwright & Hammerlock and sees players attending the engagement party for Sir Alistair Hammerlock and Wainwright Jakobs. The party is being held on the ice world of Xylourgos and will see the appearance for Borderlands 2′s Gaige, who has taken it upon herself to act as the wedding planner. Things get a bit violent when the party runs into mutated zealots worshiping the corpse for the Vault Monster.

Players will be able to access the DLC at any time, and those creating a new character can bypass the main game’s opening stages to enter it immediately. Enemies and loot will automatically scale to the player’s current level. Rewards include new Legendary items, new Vault Hunter Heads and Skins, interactive Room Decorations, and more. Guns, Love, and Tentacles: The Marriage of Wainwright & Hammerlock will be released for PC, PlayStation 4, and Xbox One on March 26, 2020, and is included in Borderlands 3’s Season Pass.

A third campaign DLC for Borderlands 3 will be released in summer 2020, with a fourth to follow. The game will also receive a free end-game update in April, adding Mayhem Mode 2.0 with overhauled modifiers and more loot, as well as the Revenge of the Cartels in-game event. May will sees another free content update adding a new Guardian Takedown and new challenging bosses. 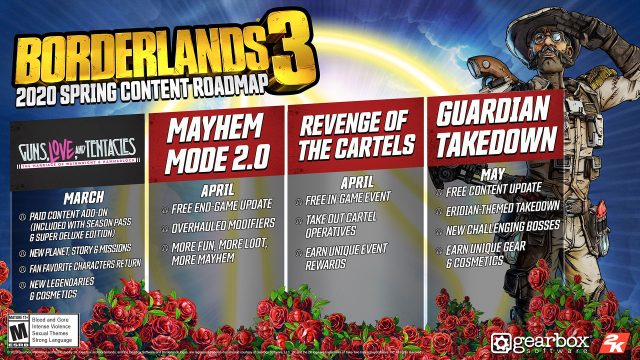