Attack on Titan 2 is an ambitious title with heaping helpings of content and modes to dig through, although it is all anchored to a somewhat repetitive combat loop.

I’m not all that big on anime. I could probably count on one hand the number of anime shows I have more than a casual knowledge of. Attack on Titan, however, is one of those I actually have found myself getting sucked into — the grotesqueness of the titular Titans and the show’s brutal violence certainly piquing my interest and churning my stomach in equal measures — and I’d be lying if I didn’t admit to having looked into video game adaptations after watching it. Omega Force and Koei Tecmo’s Attack on Titan 2 is a fairly recent entry, released in 2018, that fits the bill well. In July of this year, the Final Battle DLC was released for it, and I got a chance to sit down with the full title for some extended play time. It’s an ambitious title, no doubt, with heaping helpings of content and modes to dig through, although it is all anchored to a somewhat repetitive combat loop.

The base campaign of Attack on Titan 2 takes players on a straight shot through the first two seasons of the anime, spending time primarily on the major events that took place during the show’s narrative. Players take on the role of an all-new, user-created cadet in the 104th Corps, training right alongside Eren, Armin, Mikasa, and the rest of the show’s cast. Players experience all of the major story beats, starting with the Titan attack on Shiganshina that kicks off the anime’s events, to the battle for Trost, and all the way through dealing with the Female, Beast, Armored, and Colossal Titans. By casting players as an ancillary character, they aren’t tied to specific plotlines or characters from the show, and are instead sent on all manner of missions, somehow managing to always pop up where the action is heaviest. While this approach does offer some freedom to include the show’s events regardless of where they took place, the difficulties of adapting such a densely-structured plot into an interactive format do show, as some events are understandably glossed over or omitted altogether. Thusly, the game will likely hold more appeal for those that come into it with an established knowledge of the narrative rather than a completely blank slate. 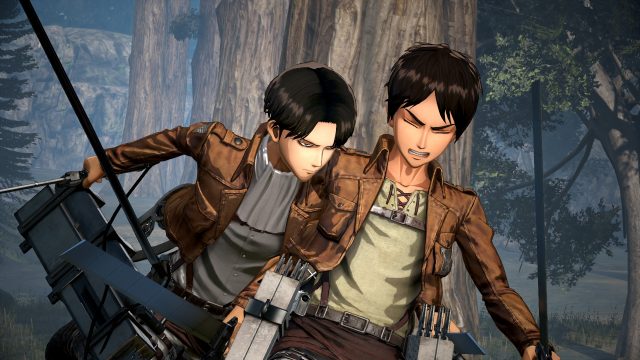 Characters and iconic scenes from the show are all present and accounted for.

Knowing the importance the anime’s trademark combat carries with it, namely fast-paced aerial maneuvering featuring adversaries of vastly different dimensions, I was honestly more than a little skeptical a game could pull this off in a simple, player-friendly manner. To its credit, Attack on Titan 2 manages to do just that, enabling players to switch from on-foot to airborne control at the press of a button, and making complex maneuvering a cinch to pull off. Swift maneuvering using the character’s ODM gear is also easy to perform, if perhaps a bit less intuitive than Insomniac’s recent Spider-Man.

That said, as fast as the combat is to master, it becomes repetitive just as quickly. Although Titans vary in size, hit points, and ferocity, the basic technique of swinging behind one to slash at its neck remain largely unchanged throughout the entire game, with only a few select foes first requiring being weakened by targeting specific limbs to bring them down. Mission after mission of identical-feeling combat really drives home the connection to other Koei Tecmo properties, making Attack on Titan 2 feel very much like a Musou game; those looking for variety in the gameplay will instead have to rely on the narrative to pull them along here. 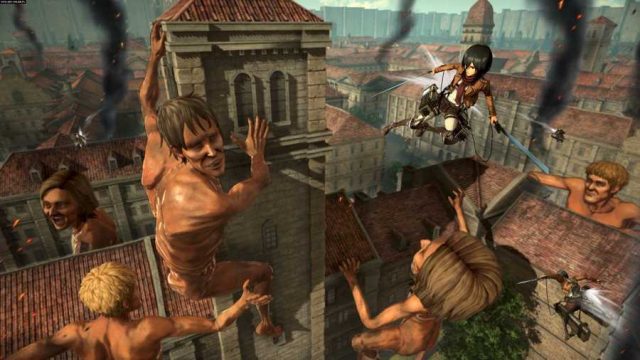 Taking to the skies with your ODM is surprisingly simple to master.

Aside from the main campaign, there is a wealth of ancillary content to be found in the game. Chief among these is an additional story mode, released as part of the Final Battle DLC, that extends the narrative into the show’s third season, continuing the events of the main story mode through the eyes of other well-known characters from the show. Territory Recovery mode lets players choose from over forty characters from the show and take back the lands in and around the three Walls from the Titans, while further systems, such as building up defensive bases, upgrading equipment, delving deeper into ancillary characters’ backstories by improving friendship levels, and a town mode that lets players socialize with the anime’s large cast, round out the overall package, though combat remains largely one-note throughout. Even online play is accessible in certain modes, including co-op and competitive. There is a commendable effort put into making the game as cinematic as possible, with plentiful well-animated cinematics recreating iconic action moments from the show, and plenty of voiced Japanese dialog, although the amount of it that continues playing on-screen while players’ attention is already actively focused on battle is a little excessive, and means non-Japanese speakers will likely miss the lion’s share of it.

Attack on Titan 2 works best as a companion piece to the show, letting players strap into their own upgradeable omni-directional mobility gear and take to the skies to fell some Titans, while those new to the world will likely want to catch up on the show between gaming sessions to get the most out of it. However, it is a technically sound representation of everything the anime promises, with a good amount of content and production quality. Merely the repetitive combat put a damper on things for me, though the narrative does have that just-one-more quality to see what new developments are just around the corner. For fans of the show and those that enjoy grinding out Musou-style combat, this game will likely offer something of interest.