It may only be two weeks away from release, but before I left the expo show floor for the year, I stopped by Sega’s booth to get some hands-on time with Ryū ga Gotoku Studio’s Judgment. While it’s not too much of a stretch to predict what to expect from a Yakuza spin-off, I think the formula has been tweaked just enough to suit this game’s dark personality.

It’s hard to say whether the core gameplay or the multitude of side activities available to the player is what drives most players’ interest in these titles, so I checked out a bit of both. Starting story mode dumps one right into the game’s opening mission, where the narrative jumps into an ongoing investigation. Lawyer-turned-detective Takayuki Yagami, in an undercover vagabond get-up and scruffy beard, and a fellow investigator from the Yagami Detective Agency are busy tailing a suspect through the crowded Kamurocho streets for an as-yet-unknown purpose. 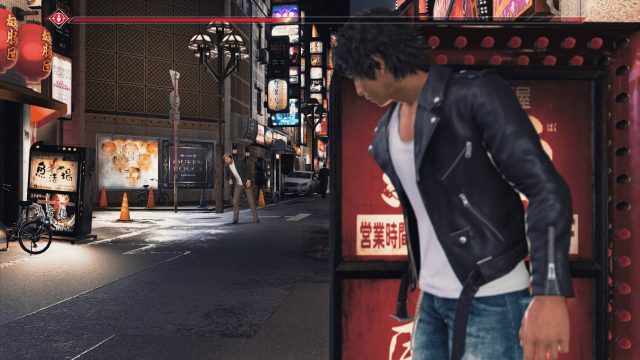 In a moment of carelessness, Yagami runs into a group of local toughs who don’t take too kindly to being accosted by this homeless individual. Stripping off his disguise, it’s time for Yagami to teach the punks a lesson through the use of fists and feet. Combat feels fluid and fast, with the over-the-top martial arts action the series is known for. The ability to use environmental objects to dispatch foes returns, and it was as satisfying as it was hilarious to have Yagami pick up a plastic traffic cone, then use it to repeatedly crush in the final remaining thug’s face in a spray of blood and teeth.

With the thugs dealt with, the tailing job picks back up. Using cars, signs, and even light poles marked in the environment as hiding spaces when the subject became suspicious, I learned about some of the investigative gameplay aspects of Judgment. At various times during the game, it becomes necessary to search the environment to find clues or evidence. When this happens, the view switches to the first-person perspective of Yagami. Losing sight of the tailed man in a crowd made it necessary to find him by comparing his features, using an on-screen checklist of characteristics, to everyone in the immediate vicinity until I found the person who matched all the needed physical traits and could resume tailing him. 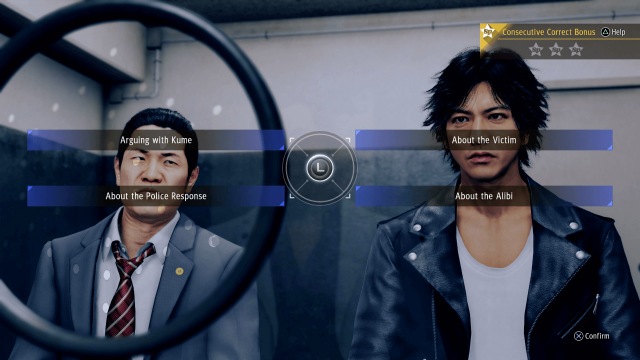 Not wanting to run out of time before seeing a bit of everything, I next switched over to check out two of Judgment‘s side activities. There’s an on-rails first-person zombie shooter that has Yagami whip through the streets of Kamurocho while wasting zombies, bloaters, and more abominable creations. While a very familiar concept, this “Kamurocho of the Dead” side activity was immensely fun, and could easily entertain players as much as the main campaign. Then there was the board-game-esque “Dice & Cube”, where Yagami must make it from one end of Kamurocho to the other by moving along nodes based on a limited number of dice rolled by the player. Each node he comes to a stop at features some event happening, from receiving an item, which provides money to use in the main game, to combat nodes — tiger fight, anyone? Other activities like drone racing, mahjongg, and the Club Sega arcade are also around, while some Yakuza staples, like karaoke and hostess clubs, have been removed as they don’t fit Yagami’s personality, however, dating a love interest is a possibility in Judgment.

Between a dark murder mystery to solve in the main campaign, and amusing distractions like Dice & Cube and Kamurocho of the Dead, it’s easy to see why Judgment is a game to look forward to. Players can revisit Kamurocho on PlayStation 4 from June 25, 2019.