Enter the Gungeon Gets Switch Retail Release, A Farewell to Arms Out Now

Dodge Roll and Devolver Digital’s bullet hell dungeon-crawler Enter the Gungeon is receiving a physical retail release for Nintendo Switch in North America. The retail version, from publisher Nighthawk Interactive, will be released on June 25, 2019, through selected stores, priced at $29.99. The physical edition will include the game, all of its DLC, the exclusive “Shotgun Kin” playable skin, original soundtrack download code, exclusive stickers, an exclusive Bullet Kin papercraft, and reversible cover artwork. 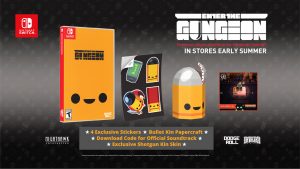 In addition, the game’s final free major update, A Farewell to Arms, is now available on Nintendo Switch, PlayStation 4, Xbox One and PC. The update coincides with the game’s third anniversary and is being marked with a 50% discount for the game on all platforms. The update adds two new classes, the Paradox and the Gunslinger; new guns and items; a secret floor; and the community-inspired Rainbow Mode.