NIS America and Koei Tecmo have announced that they are teaming up to release a limited edition for Atelier spin-off Nelke and the Legendary Alchemists: Ateliers of the New World. The edition is available to preorder from NIS America’s online store for both Nintendo Switch and PlayStation 4. It is priced at $99.99 and contains: 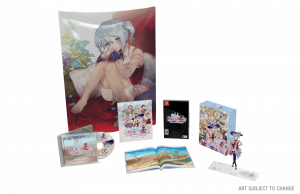 In addition, Gust revealed some more characters appearing in the game, which features over a hundred taken from across the Atelier series and its spin-offs in addition to various original characters such as main protagonist Nelke. The new characters revealed are: Suelle Malen (Atelier Lydie & Suelle), Lita Blanchimont (Atelier Iris), Ulrika Mulberry and Uryu (Mana Khemia 2), and Bartholomaus Platane (Atelier Violet).

Nelke and the Legendary Alchemists is set to be released in Japan on December 13, 2018, with its North American and European releases currently set for early 2019. The game will be available on PC (via Steam), PlayStation 4, and Nintendo Switch. Gust recently announced the newest mainline game for the series, Atelier Lulua: The Scion of Arland, which will see the series return to its Arland setting.