Square Enix showed off more of Kingdom Hearts III during its E3 showcase, with a new extended version of the video shown during the Xbox E3 briefing. The company also announced two Deluxe Edition bundles for the game. The first, simply dubbed the Deluxe Edition, is priced at $79.99 and includes:

The second edition bundles the Deluxe Edition with a Bring Arts Sora, Donald, and Goofy figure set. This bundle will be exclusive to the Square Enix Online Store and is priced at $229.99. 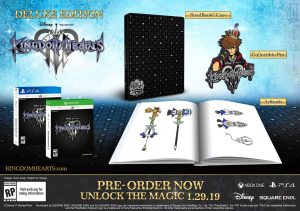 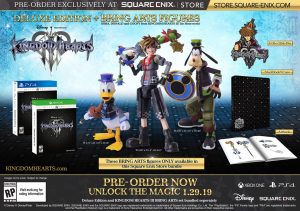 Originally announced in 2013, Kingdom Hearts III is the third mainline game in the Kingdom Hearts series and once again follows Sora, Donald Duck, and Goofy as they travel to various worlds from Disney franchises. Square Enix recently revealed that the game will finally be released for PlayStation 4 and Xbox One on January 29, 2019.