Yakuza 6: The Song of Life Review

It’s hard to believe that the Yakuza series has continued to go strong for over ten years. In that time, we’ve had so many storylines for poster boy Kazuma Kiryu, each more intense, passionate, and heartbreaking than the last. Kiryu is a protagonist who has had so much growth from his early roots as a young punk, maturing into a caring and head-strong man who loves his surrogate daughter, Haruka, more than life itself. Yakuza 6: The Song of Life is a celebration of the series, as well as a mindblowing finale to Kazuma and Haruka’s story.

Yakuza 6 immediately picks up from the previous game, wherein Kazuma Kiryu has been injured and approached by police officers who want to arrest him for past crimes. Without resisting arrest, Kiryu is sent to jail for three years. After serving his sentence, he visits Morning Glory Orphanage and learns that Haruka has gone missing. Returning to Kamurocho, Kiryu learns that the Saio Triad and Tojo Clan are at war, and worse, he learns that his little girl has been hit by a car while protecting her son, Haruto. Kiryu vows to find out who was behind the brutal hit-and-run and put an end to brewing war between the feuding groups.

The Song of Life is an intense ride from start to finish. Travelling between Hiroshima’s Onomichi and his old stomping grounds of Kamurocho, Kiryu’s story is about how far someone is willing to go to protect family. There are themes of what it means to have a chosen family, parenthood, and the lengths we go for our loved ones. Unlike a few of the previous Yakuza instalments, Kiryu’s story in Yakuza 6 is immensely personal, mainly because it’s his last and because it is his confrontation with what it means to be a parent and accepting that Haruka is no longer a little girl.

There are also fantastic story beats involving the importance of fatherhood and choosing one’s own family. In Song of Life we are introduced to members of the Hiroshima-based crime family, the Yomei Alliance, and one of its subsidiaries is led by Hirose, who is voiced by and modelled on the impeccable “Beat” Takeshi Kitano. Hirose’s storyline is one of the most saddening as it looks at the many layers of being a surrogate father to a bunch of misguided boys who get caught up in crime and his desire to try to lead them towards a better life. Song of Life‘s story is easily a highlight, and definitely one of the strongest the series has seen in recent years. 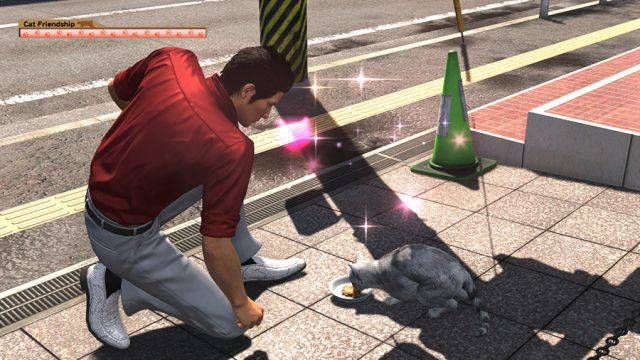 Making friends with all the cats.

Even the substories in The Song of Life are impeccability written and entertaining. There are so many memorable side-quests. One particular highlight sees Kiryu adopt the mantle of the Onomichi mascot, “Michi,” wherein he is forced to participate in a live interview, and even win the heart of a young girl who’s afraid to go in for life-threatening surgery. Many of the substories shine, from helping a cat cafe owner recruit some adoptable kittens to helping a group of young men reach their epic baseball dreams, and there’s a lot to love story-wise. There are also new sets of submissions called “Troublr” requests. By opening the Troublr app, Kiryu can assist in immediate crises happening throughout Onomichi and Kamurocho. While some of these quests are repetitive and frequently not the most interesting, they are worth the time investment for experience the player gains, and often some of these missions unlock new substories.

Yakuza 6 makes a few changes to the series formula, though not all of them are a homerun. Notably, the combat system has taken a rather strange turn in this instalment. With the recent release of Kiwami, players were introduced to an exceptionally robust and varied combat system wherein Kiryu could swap between three combat styles. In The Song of Life, things have reverted back to a single type of combat that removes some of the depth from what Kiwami offers and is a much simpler beat ’em up than its predecessors.

By gaining experience points, Kiryu can gain new skills to beef up his fighting abilities and heat gauge. Heat, which enhances Kiryu’s fighting skills, has changed somewhat as he can now enter “Extreme Heat Mode,” wherein his strength is enhanced tenfold. By pressing R2 when prompted, Kiryu can chain heat together if multiple enemies surround him, allowing him to focus on multiple opponents as opposed to one at a time. This is a welcome change to the heat gauge, and it does help to spice up the combat from feeling too simplistic. Still, the removal of having multiple styles, and even the fact that the player only uses Kiryu is a bit of a letdown given the series’ past instalments. Having multiple styles of fighting kept the battles from getting stale, and sadly in Kiryu’s old age, The Song of Life shows that perhaps he’s gotten a little slow. 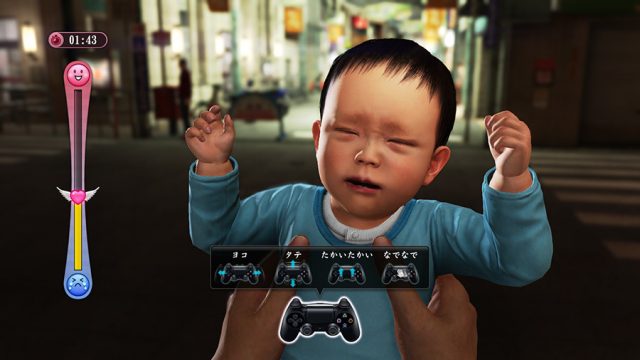 Something that may disappoint longtime fans is the absence of many of the series’ older characters, particularly considering the game is a finale of sorts, as Akiyama is the only one with any real screen time. The series has five other mainline titles and over the years players have gotten to experience stories that were directly linked with Kiryu’s, so to not see Majima or Taiga very much was a little sad, though it’s understandable given this is supposed to be Kazuma Kiryu’s last hurrah.

The Yakuza series has never been a powerhouse when it comes to graphical quality, and 6 continues that trend. In game graphics are serviceable and clean, though there are still cases where objects clip through the environments. The story sequences are gorgeous, right down to being able to see Beat Takeshi’s pores in crazy detail. The Japanese voice acting continues to be stellar, which is par for the course for this series, and the music continues to be ambient and mellow, though nothing stands out as being a memorable track.

I’ll admit, I teared up a lot at the end of Yakuza 6. Part of this was coming to accept that the series I’ve adored for so long, with a protagonist I’ve grown up with has finally ended. I feel that the way SEGA completed Kiryu’s saga was done with so much class, and the investment I felt throughout was constantly there. While the changes to the combat were somewhat of a letdown, I won’t deny that every other aspect of the finale wowed me and left me an emotional train wreck. Long time fans of the Yakuza series will likely find The Song of Life to be a satifying conclusion.