Wintermoor Academy may provide the best education around, but for Alicia, it’s been a challenge.  She’d barely found a group of fellow tabletop gaming aficionados when the school principal announced all clubs were in danger of being closed!  Only by participating in increasingly challenging snowball fights could each club continue.  Combining together elements of visual novel gameplay and a tactical RPG combat system, Wintermoor Tactics Club does an excellent job fusing the two into a short and sweet romp.

Gameplay is divided almost evenly between the two styles, and the balance is really well done.  The War of the Clubs provides a backdrop of tension, competition and camaraderie, as the Tactics Club competes to become the Ultimate Club at Wintermoor Academy.  Alicia can visit several different locations inside of the Wintermoor campus, chatting with a variety of students.  By doing so, she learns more about the school as a whole and the student body while performing side quests; these short tasks tie back into the tactical RPG combat played out through the club’s tabletop campaign, as well as aiding in the daily snowball battles dictating which club survives. After all, any club that loses their snowball fights is immediately disbanded.  The story is a delight with well paced, snappy dialogue; the only minor drawback is that the story’s plot twist feels a little obvious, though even this does not particularly distract from the game’s stellar narrative, since the larger story still wraps up in an entertaining way. 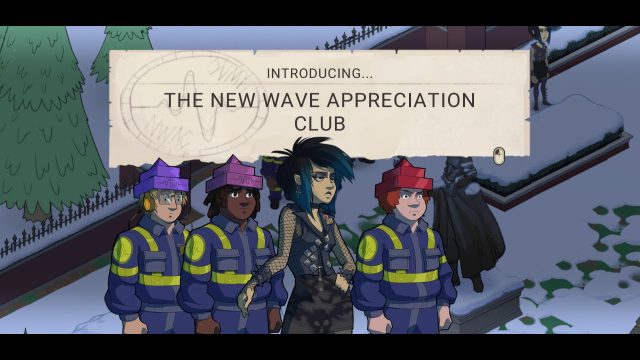 Wintermoor Academy’s clubs are eclectic, to say the least.

The majority of the game’s combat comes in the form of the Tactics Club’s favourite pastime Curses and Catacombs, stylized as C&C.  For those who have played a tabletop adventure like Dungeons & Dragons or a tactical RPG like Final Fantasy Tactics, combat should look quite familiar: a small field demarcated by squares.  Each ally and enemy will have a chance to move and attack once per turn, and the abilities available and damage applied are modified by different types of equipment and abilities.  Each character has an in-game persona which largely reflects their real-life personalities and interests; the club gains a new member as each other club is defeated.  Jacob, the group’s trickster, plays a wily rogue, while the goth metalhead Baphomet plays a demoness once the New Wave Appreciation Club is disintegrated.

The campaigns themselves are what really ties both pieces together. While the club’s leader Colin runs standard C&C campaigns from manuals, Alicia handcrafts campaigns to bring new members into the fold; as each club is defeated, one member of the routed group is invited to the Tactics Club, bringing their own personal flair to the ongoing standard campaigns.  As membership swells, so too do each character’s combat options.  By completing quests, tackling challenging optional battles, and by simply progression the main plot, each member can gain new types of equipment, unlock additional abilities, and even strive to conquer advanced classes.

As more of these become available, the game freely encourages players to experiment, allowing the former paladin tank to become a berserker, or the mounted spear-wielder to switch from primarily physical attacks to a magical powerhouse.  Navigating menus to swap equipment and specialties, change party members, activate abilities in combat, and decide where to go next in the school is fast and easy both with a keyboard and mouse or with a controller.  At the end of each combat encounter, players are awarded medals based on their performance, and stages can be freely replayed as often as needed to pursue these goals. 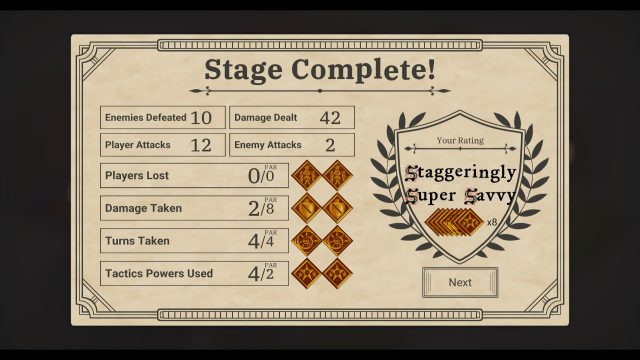 Each stage has goals for the player to strive to complete.

For the large majority of the game, party builds can be set by the player’s preference, and the game’s stage setups frequently encourage more than one solution to each level.  However, this freedom of choice dissipates during some of the challenge and mastery fights, intended to unlock additional abilities or equipment for each character.  These levels can be quite strict, requiring specific characters wearing specific pieces of gear to be overcome, which is the opposite of the rest of Wintermoor’s philosophy to find the gameplay style best suited for the individual player.  That being said, while these specific fights can be a touch unbalanced or seem unfair, they are entirely optional, no-fail can be turned on at any time, and players can always for a new character would appear to open up additional options.

Wintermoor’s strong world is bolstered by a mix of classic and original ideas and characters.  While the snowball fight theme might be ripped directly from Final Fantasy Tactics Advance, Wintermoor Academy presents cultural diversity without making a big deal out of it, and the relationships between the students weaves a strong, believable background which plays excellently off the more fantastical story running alongside the day-to-day troubles of high school students.  Further bolstering the feel of the experience are quality music and a strong visual style that will both stay with the player after their ten hours or so with the game are over.

Wintermoor Tactics Club reminds me a lot of the Persona series: both games sit on that razor’s edge of combining together entertaining combat with social gameplay; both tie into each other in a fluid way that makes the game shine.  For anyone who wanted to try the Persona style of mixed genres, but didn’t want to invest over 100 hours into a title, Wintermoor is a tightly paced, well balanced alternative.