Let’s Get Into the Wargroove Tonight

The simplest way to describe Wargroove is as a medieval incarnation of Advance Wars. That’s certainly not meant as a disparaging comment, and Chucklefish has crafted an engaging tactical title that has its own identity. The inspiration from Advance Wars is undeniable though, and provides a good preliminary guide for prospective players. Those who have found any enjoyment from Nintendo’s series are likely to enjoy what is offered here.

Turn-based tactical combat with a medieval flair is the focus. A wide variety of units do battle with each other, ranging from relatively staid archers and cavalry to more fantastical creatures such as harpies and golems. Simply taking out adversaries isn’t enough, as the funds to create reinforcements come from capturing settlements for income. This cash is principally expended on purchasing additional troops for battle, which come from specific recruitment spots on the map. Commanders are strong but unspecialized units that are unique, and truly shine once able to use Grooves after a little time. Groove effects range from massive healing for friendlies to summoning new units that can immediately act, and cost nothing to deploy. 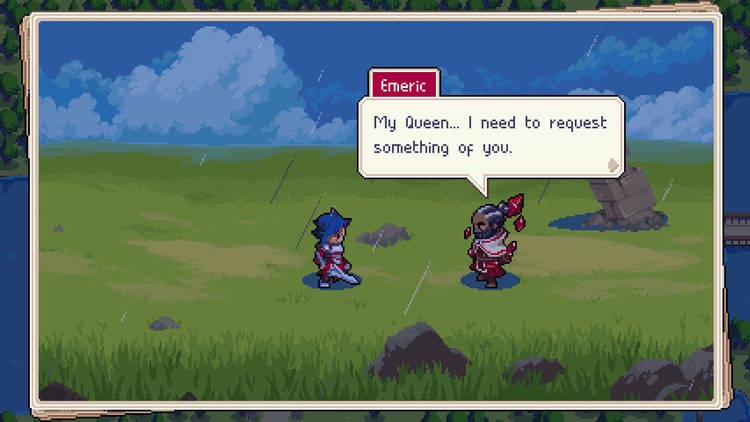 How Emeric navigates doorways with those crystals floating around the shoulders is never addressed.

Victory in combat is usually obtained via defeating the enemy Commander or destroying the Stronghold, a unique structure on each side that has no other function than to be the symbolic heart of operations. Health of Commanders and structures gradually replenishes over time, requiring a concentrated assault instead of piecemeal attacks. Some battlegrounds come with different victory conditions, such as fleeing an oncoming onslaught or protecting specific units. Wargroove is also good at delivering unique map constructions that force the player to proceed differently than usual. Particularly interesting are several encounters where only the units initially onscreen are available, as the maps lack any recruitment points.

Selecting between missions and modes is quick and intuitive. Moving units around on the map is also presented with all necessary information ready to view, from the results of an intended attack before it is initiated to the utility value of each unit. One aspect which would have been useful is the ability to see at a glance enemy attack ranges. This function is not present, requiring the player to count squares in order to determine which spots are safe from attack.

Wargroove‘s AI is not necessarily brilliant, but it does manage to give the player a rough time. Enemies are rarely accommodating enough to take easy bait, and will often choose to wait rather than make a suicidal attack. Adversaries are also cunning enough to seek out favorable engagement terms whenever possible. This can make the adjustable difficulty quite useful, as it improves the damage dealt and inflicted by player forces. A higher difficulty option is also present for challenge seekers. 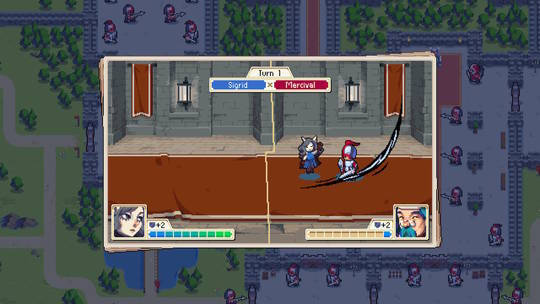 Pit an immortal vampire against a weakened grunt soldier, and the result won’t be pretty.

In addition to the narrative mode with its recognizable tactical structure of battles and story development, two additional single-player game modes are available. Puzzle mode gives the player one turn to arrive at victory on twenty-five maps using set unit composition and positioning, something that is rather entertaining. Arcade mode exists for each of the Commanders in the game, engaging them in five successive battles with other characters on maps that are arranged in mirror fashion, giving each side equal starting assets and terrain. Arcade mode is fun for a time, but as each character has a single associated map and playing through all of the content will require seeing those maps numerous times, it can get tedious for completionists.

Wargroove‘s narrative focuses on Mercia, the new Queen of Cherrystone.  She found herself elevated to that status after her father’s assassination by the immortal vampire Sigrid. The new monarch must flee her nation to survive when the country is invaded by the undead troops of Valder. Her flight to the east in search of allies to contest this existential threat does not go unchallenged, and freeing Cherrystone will not be easy.

The characters of Wargroove are an entertaining bunch, but the narrative they participate in is not a complex one. Narrative eats up comparatively little of the playing time, though Chucklefish has made sure to keep the presentation enjoyable during each cutscene. A couple of wrinkles are introduced later in the going that don’t fundamentally alter a familiar trajectory from numerous other titles. This isn’t a problem given that gameplay is the focus throughout, but the narrative is not the reason for players to investigate. 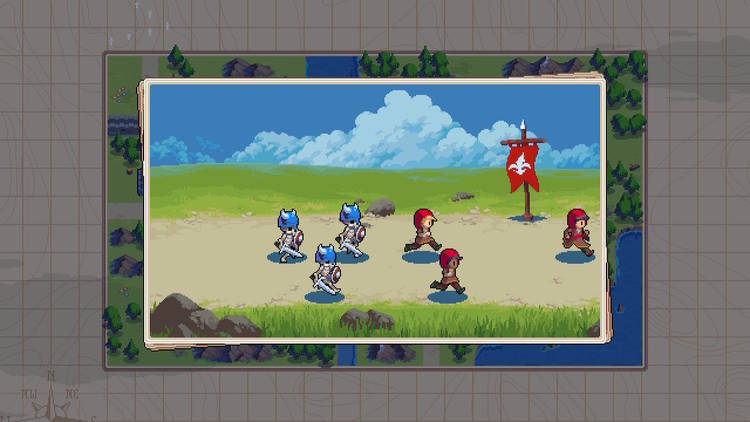 For skeletons lacking any visible tissue or organs, they move pretty fast.

Getting through the narrative doesn’t require a time commitment more than twenty-five to thirty hours. Reaching the finale in the form of an Epilogue mission requires considerably more time to be committed, as it relies upon a star ranking. Stars are earned by completing story battles, going through Arcade mode and solving puzzles. The wrinkle arises from stars being awarded dependent upon the difficulty selected, and only by getting at least 100 of the 200 available in the entire game can the Epilogue be accessed.

Wargroove does not use visuals that push contemporary hardware to the limit, but it is quite appealing. Various battlegrounds look distinct and are effectively rendered, and maps sport visual flourishes such as flights of birds that do a fine job of depicting the world. The various nationalities have uniquely named unit types, and while they are functionally the same in combat, the sprites used in battle are unique to each country. More than anything, what Chucklefish has done is imbue the visuals of Wargroove with a personality, putting considerable effort into ensuring that the graphics look appealing. 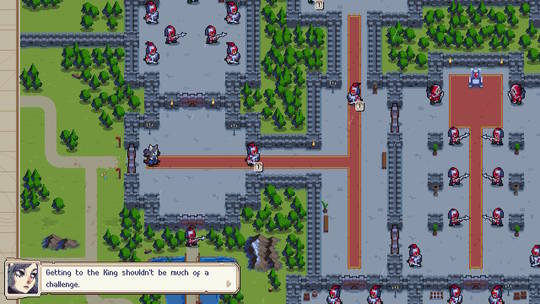 Peripheral vision is apparently not a common ability among the castle guard.

Each Commander has a unique musical theme, though the length of some encounters means the tracks can become overly familiar. The compositions are uniformly good, and even provide a little additional character background through the type of melody applied to each participant. Sound effects demonstrate a considerable amount of effort, complementing the visuals by having even units that are functionally identical get unique audio accompanying their actions. Commanders also have spoken accompaniment when performing tasks on the field, and the vocal performances do a good job of embellishing character traits suggested by other parts of the game.

I’m an antisocial recluse and took no advantage of the features available by connecting to the Internet, but the presence of such things in addition to the core experience means Wargroove has an enormous amount of content. Even without going through all the internet-enabled content, this game has plenty of material to keep anyone interested in a tactical experience invested. It’s not a game in which every element is effective, especially for those who demand a powerful narrative, but Chucklefish has made something worth investigating for those thinking Nintendo has let Advance Wars sit around without a follow-up for too long.