The walls of the abandoned police station are dark with a mix of grime and blood. A deadly virus has ravaged the population with no end in sight. The only chance humanity has for survival is…a harem of undead anime girls. Publisher Sekai Project and developer Mr. Tired Media’s visual novel and dungeon-crawling RPG hybrid Undead Darlings: ~no cure for love~ attempts to bring the best of both sub-genres to a common experience. While the game features an energetic soundtrack and multiple endings, it ultimately struggles to be more than the sum of its undead parts.

From the start, Undead Darlings leans into both zombie and moe anime tropes. The player controls Reginald “Reggie” Happenstahnce, a young man who awakens from a days-long induced coma to discover the entire world has changed. His friend and neighbor Pearl informs him a virus has transformed almost the entire population into zombies. While Pearl herself has been infected, she explains she is somehow able to retain her sentience and that Reggie’s doctor father has left him with one dose of the cure, which must be replicated. With that, the pair take off to investigate the mysteries of the virus and find a chance to replicate the antidote.

The story is a combination of zombie and anime tropes coupled with a rather unsophisticated sense of humor. The end result is decidedly mixed. The script winks at the fourth wall and the tone can be inconsistent between dialogue scenes. While the individual girls are provided distinct characterization through optional story sequences, most of them fall squarely within their assigned trope. Each character maintains an affection level with Reggie, which is influenced by the decisions made during the dialogue sections. 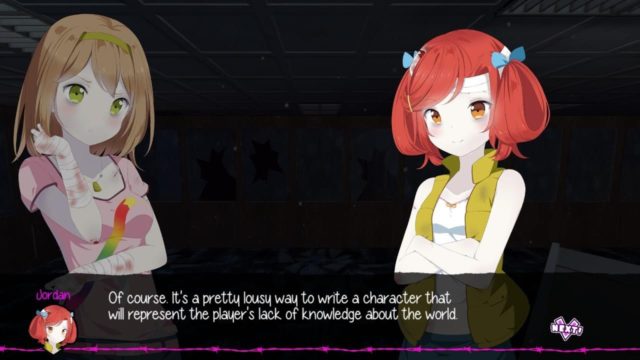 After leaving Reggie’s house, the player is given an opportunity to investigate locales which are common to zombie movies or survival horror games. The game establishes its visual novel and dungeon-crawling dichotomy early on with the first dungeon, a police station. Other locations include empty schools, dilapidated hospitals, and office buildings, among others. Between these dungeons, the player gets to sort their inventory, arrange the party, and repair weapons.

Dungeons are first-person affairs, reminiscent of the Etrian Odyssey series. The party of up to three characters, selected from the total of six recruitable zombie girls, explores expansive locations replete with randomly-generated treasure, zombified enemies, and story events that require certain combinations of characters to trigger. These vignettes provide glimpses into the lives of the characters and range from whimsical to harrowing.

The dungeons are long and peppered with these skits, while players can encounter enemies in both fixed locations and random encounters. Unfortunately, an inability to switch party members on the fly becomes a glaring issue after just a few dungeons. It’s cumbersome to have to leave a dungeon just to change party members in order to trigger a cutscene. 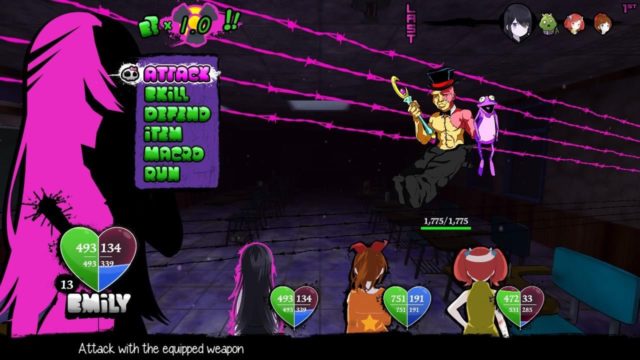 Enemies are quirky and well-drawn.

Combat features a turn-based system with a static layout. The enemy designs are clever but frequently palette-swapped. Party members can choose between physical or technical/elemental attacks, costing either weapon durability or SP. If the weapon durability is reduced to zero, the party member’s weapon breaks, reducing their effectiveness with no option to change weapons during battle. There is a damage multiplier that increases when players are able to exploit enemy weaknesses, but it is reset if a player uses an ineffective attack prior to activating the multiplier. Characters can also utilize combo attacks if the component techniques are selected during the same turn. The game features a number of difficulty modes but, even at the easiest setting, the first few dungeons can be particularly challenging. From the onset, enemies appear to be damage sponges, with enemies in the first dungeon possessing upwards of 1000 HP.

There are no shops or currency in Undead Darlings. Instead, all weapons and curatives are obtained from treasure chests. Items in treasure chests are randomly-generated and chests reappear when the party reenters the floor, so players can attempt to try and stock up by repeating floors. Given that swapping members must be done outside of the dungeon, it would be nice if the loot was tailored to the active party, as it can be irritating to search for a particular weapon for a few hours, only to obtain one that can only be equipped by an inactive party member. 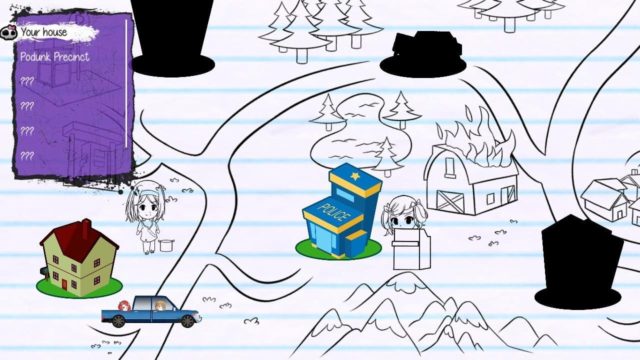 The world map looks like a chain restaurant’s kids’ menu.

The graphics are oddly charming and allude to dungeon-crawlers from earlier console generations. The dungeons themselves are dark and drab but feature minor details that elevate the game’s sense of humor. The music is a highlight with a smattering of genres and an excellent electronic-rock battle theme. Enemies are well-drawn with quirky details, such as one carrying a can of Crystal Pepsi, although the lack of dynamism in battle becomes jarring, especially at the beginning of dungeons when battles may run long.

Undead Darlings: ~no cure for love~ tries to keep a lot of severed limbs in the air. The battle system shows promise but is compromised by balancing issues. The story indulges in tropes without necessarily elevating them. Fans of visual novels and zombie-anime moe comedies will be satisfied, while stricter dungeon-crawling enthusiasts may find much more satisfying treasure elsewhere.