A century after the events of the previous game, Torchlight III largely succeeds in bringing a fond and familiar experience to fans of the dungeon crawler.  Echtra Games creates a world that is a lot of fun to play through with many different options for customizing the class of choice into a perfect slaying machine.  Players looking to simply loot, slash, shoot, and fireball their way through dungeons will not be disappointed.  However, those looking for an exceptionally deep experience won’t feel fulfilled.

This time around in Novastraia, the Ember Empire is slowly crumbling, being pushed back by the goblins.  The empire’s forces are backed against the docks of one of their towns, Trevail Point, when the hero emerges from a ship that just sailed into the doomed town.  After beating back the goblins, the hero soon finds that dark powers led by sisters Brall, Sadista, and Varis are behind the attacks, bringing with them the demonic Netherim forces who are in turn being ordered around by the mysterious entity known only as Mother.  Players go out on quests to try and stop their efforts and stop the invasion.

Who is this hero?  That’s up to the player to decide, choosing from of one of four base classes: base classes: the speedy long-range Sharpshooter, the all-encompassing magic-wielding Dusk Mage, the melee specialist Railmaster who brings along a unique, fully automated locomotive companion and finally the Forged, a steampunk robot built like a tank that can be used in any situation.  On top of having two unique skill trees for each class, the hero can choose one of five relics to augment their skills.  Relics help round out characters, making them more suited to specific roles for use in co-op or more self-sufficient for a solo playthrough.  None of the combinations are completely incompatible and creating multiple characters to try out each variation is encouraged. 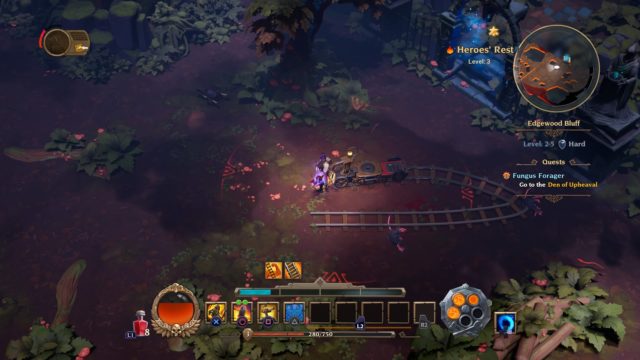 Who doesn’t love a gun-toting locomotive?

Torchlight III as a whole is much less dark and broody than others in the hack-and-slash genre.  Some attempts at comedy occur and the overworld can look bright and inviting at times despite the invasion of the Netherim.  The PG-13 aesthetic makes it much more accessible to casual fans of the genre not looking for anything too deep to enjoy in short bursts alone or with friends.  With that in mind, Torchlight III is not a particularly difficult game.  Most of the bosses have easy-to-predict patterns and, as long as the hero of choice is geared sufficiently and loot drops have been kind, there are not really any spots likely to act as sticking points.  Difficulty settings can be tweaked to get more rare drops and tougher enemies, but even then it does not change the boss’ basic mechanics, just their numerical power levels.

The entirety of the gameplay is built towards the feeling of one more: one more dungeon, one more level, one more gear drop one more skill increase.  Each map has a very linear path to the next spot.  The only detours are plot-related side dungeons that offer a pet and boss at the end or hidden rooms with extra loot.  By defeating bosses or other significant encounters, player gather fame.  Once enough fame is earned the character gains a contract level, which rewards the player with gear, fort decorations, or special dungeon maps.  However, if this “one more” structure doesn’t appeal, there is little else the game offers.  That is not to say the game is bad, it is just very formulaic and simple.

Connecting each of the overworld’s dungeon-filled maps is a path that functions as a way for the player to access their outdoor fort.  This fort is the player’s base, functioning as a safe zone for players while letting them customize it to be as stylish or functional as they wish using fort decoration pick-ups earned from some contract levels or by using basic resources.  Outside of designing its interior and exterior designing, the fort lets players break down gear for higher rare drop rates with the Blooming Luck Tree, gain enhancements from essences obtained from each act’s main enemies, to reset the hero’s skill tree using Respectacles found as drops throughout the game, and a Pet Shelter to swap out helpful pets that accompany on the player’s journey helping fight enemies and carry additional inventory.  To build these facilities players need basic resources obtained from trees, metal deposits, and boulders found and harvested all across Novastraia. 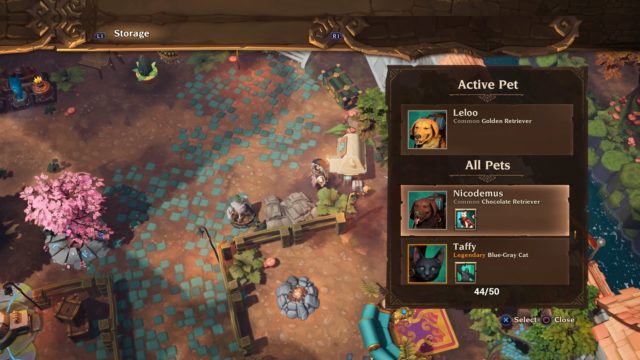 The player can collect a lot of options for a faithful companion to join their quest.

Simply fighting through the story one quest at a time can cause problems, as the game does not have a merchant system for purchasing better gear.  This leaves the hero at the mercy of random drops from enemies or random purchases from the game’s Gambler merchant, who does not reveal gear attributes until after they are purchased.  While the Gambler uses in-game currency, it feels very similar to a loot box system as more often than not one’s gold will just provide useless gear that is sold back at a loss.  Random drops from enemies are a more reliable method of getting upgrades, but there’s no guarantee a drop for a particular equipment piece will come anytime soon.  This sometimes necessitates changes in play style as suddenly a tank that cannot be damaged ends up being a glass cannon for a few levels until a useful drop is found.  In a way this keeps the game fresh and encourages players to be flexible, but for those that liked their builds or want the characters to play in a certain way, there may be some backtracking needed to re-fight bosses in the hope that a new piece of upgraded gear drops.  Another way this can frustrate is that bosses have massive HP pools, so without a strong weapon, battles can drag on for a long time.

The end-game content appears in the form of Fazeer’s Dun’Djinn.  This djinn creates one random enemy buff and one player perk that can have significant variety and increase the difficulty in each successively completed dungeon.  The djinn creates a replica of one of the story dungeons, including bumping the final boss to the player’s level, and sends them in to complete the dungeon.  Upon completion of one of these dungeons the player gains experience and new gear, as well as access to harder variations of the Dun’Djinn.  If not, the djinn sends the player back to their fort to try again.  This is currently the only form of end-game content as the story content does not restart or scale with the player’s level.

To move the story of Torchlight III along, the game has cutscenes before major boss fights and at key moments of the plot.  These cutscenes are in a static image pastel style with voice acting that fits each of the characters well.  Added to these cutscenes are lore nodes and books found on the world map that fill in plot details and move the story along but these often get cut off by voiced “inventory is full” or “your health is low” messages.  The voices are done adequately and provide a lot of the early game’s humor, as well as a sense that the world is lived in.  To go with these voices is a basic soundtrack that fits each locale.  All these sounds help provide the game with its PG-13 feel and add a bit of a Saturday-morning-cartoon aesthetic that makes it stand out from other hack-and-slash games.  This is helped along by the game’s crisp, yet campy, visuals, making the night scenes feel tense in a Scooby Doo fashion rather than a horror movie.  The visuals never falter either even when the screen is full of enemies and the player is unleashing special attacks. 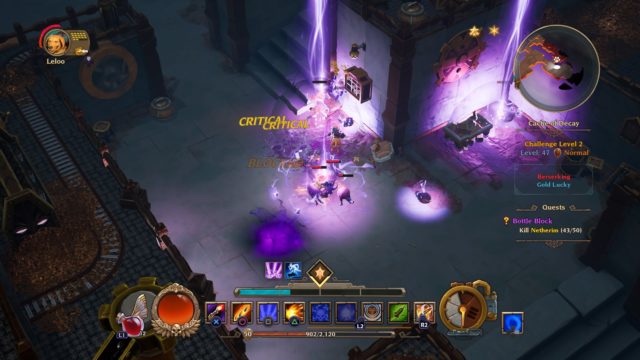 Raining powerful electrical strikes from a steampunk robot has never felt so satisfying.

Multiplayer is one aspect that should be very important to the game, and when one can connect it can be fun.  The process for joining up with strangers is rather frustrating, however, so having online friends becomes almost necessary.  A painful restriction of this mode is that the character has to be created in the multiplayer mode even when playing solo.  As a result, players have to be careful which mode to select — a glaring annoyance from a game that has a few other problematic areas.  In a few hours of attempting multiplayer there were more server drops than players available.  Updates to the game have already come out and there are plans for future updates as well, so hopefully progress in all facets of multiplayer should emerge.

Ultimately, Torchlight III is a game of simple pleasures.  Simple gatherings with friends to take out enemies for greater loot.  A simple, easy-going story that helps the game flow along faster.  Simply going through just one more dungeon to have fun in and use the hero created to rain destruction down for better gear, and do it all over again.  If something simple and fun that can be taken in small doses is what players are looking for then Torchlight III fits the bill.  However, many may wish to wait for some big patches to fix the issues with multiplayer before getting too invested, or just take a favorite hero through the single-player campaign or a Dun’Djinn until the game lives up to its full potential.