2022 has seen a number of tactics games hit the market, with more on the way. Square Enix and Lancarse’s The DioField Chronicle is the latest tactical RPG to be released and it certainly stands out from the rest of the bunch with its real time tactical battle system. That itself makes the game feel refreshing with such an engaging battle system. Unfortunately, the uninteresting narrative can’t keep up with its stellar gameplay.

In DioField Chronicle players will take control of the Blue Foxes, a mercenary unit led by longtime friends Andrias Rhondarson and Fredret Lester. The Blue Foxes carry out the orders of Duke Hende, a noble in the Kingdom of Allentain. They are tasked with helping civilian requests, orders from the Lord’s Council, and fighting off Schoevian Empire and Rowetale Alliance invasions. The story plays out as a typical high fantasy war story that delves into political conflicts, fighting for natural resources, and clashing ideologies among the members of the Blue Foxes. What’s unfortunate is how the story is told, opting for a “tell, don’t show” approach. While mission briefings have cutscenes and most of the dialogue is voiced, there are many instances where big moments in the narrative are narrated with portraits and a map of the world being the backdrop. It’s not good enough for a high fantasy story in which world-building is an important narrative element. There are a few set pieces at the end that are great, but there aren’t enough to save this bland and lifeless world.

Thankfully the characters in this world have unique personalities and shine in each interaction. One has a thirst for war, and one despises it. One wants to help the weak, while another pledges loyalty to a higher authority. There is a good amount of tension and intrigue in each and every character interaction. Instead of the game being littered with collective group tropes, every character feels fully realized and stands on their own. These positives can also be attributed to the game’s writing, as well as the subdued and superb voice acting. Andrias is the lead of the story and the most interesting as well. He is well-versed in strategy, and leads in a dignified manner. Various members will join the Blue Foxes along the way, and players will learn about each character’s backgrounds and motivations through character missions. Some of the additional mercenary members stand out more than others, but it’s an overall solid cast of characters. 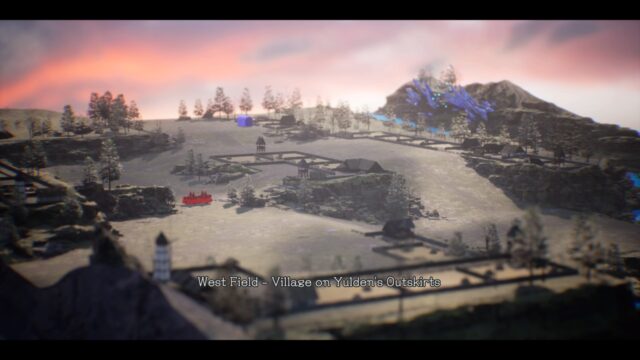 A look at a battlefield in The DioField Chronicle

The real star, though, is the real time tactical battle system. It does a great job of combining its many elements in a seamless way and never feels overbearing. All of those elements mean there are plenty of decisions to make in battle to take full command of the Blue Foxes. Before the battle starts players can prepare for it by setting which units to utilize, items to bring along, weapons and the skills attached to them, and more. Battlefields are square sandboxes with detailed terrain that includes forests, mines, and snowy mountains. While the areas do look nice there’s not a lot to them in terms of navigation. Positioning is essential, as the goal is to ambush an enemy and land critical hits. However, the maps don’t require many strategic ways to get to those positions. There are mostly narrow paths and sometimes hills to move around, but that’s it. Correct positioning can be achieved by simply moving a couple of units behind the enemy. Most of the strategic elements come down to the usage of skills and developing a balanced party. Controlling the Blue Foxes can be difficult in the first few hours because the menus aren’t streamlined. However, it doesn’t take long to seamlessly find and select commands past that.

Skills are attached to weapons in The DioField Chronicle, so weapon management becomes a great tool to customize each mercenary unit. Energy Points are consumed when using a skill and constant management of that gauge is vital to claiming victory. Every skill has a purpose as well and varies depending on the class of the mercenary. Soldiers, for example, are a unit type that makes use of daggers, swords and shields, and axes. Daggers are useful to land a finishing blow to weakened enemies, while sword and shield users are great for stunning enemies from using their skills. Each character has a clearly defined role that allows for thoughtful strategy. Overall there are four unit types and subcategories within those units that make them even more unique. Discovering uses for these units and how to use them in tandem with other units is fun to tinker with. Sequencing these skills together to efficiently take out enemies is engaging too, especially because of all the flashy animations that fill the screen that is satisfying to watch. 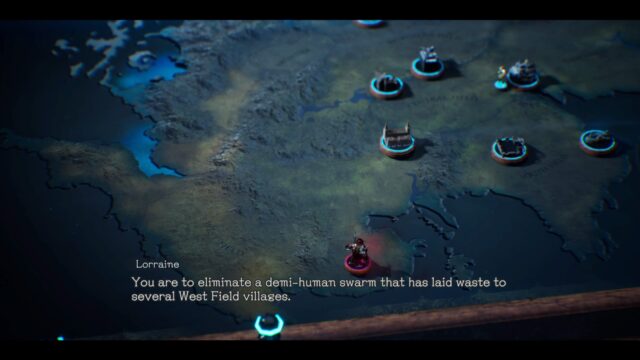 Display of the map during a mission briefing cutscene

There are four main units in battle, and players can attach one character to each of them as a support unit. So that’s three-to-four skills per character and eight characters on the battlefield that all have different status effects and uses. The DioField Chronicle isn’t a difficult game, but the three-to-seven-minute battles are packed with plenty of actions and choices to make. One of those choices includes using Magilumic Orbs. These orbs summon powerful creatures that can change the tide of battle. The best part about these summons are the gorgeous animations that will play out before it lands a heavy attack. The one problem though with this is the necessity of these orbs significantly drops later in the game. Early on there were plenty of instances where these orbs can get the Blue Foxes out of tough situations. However, it can largely be ignored later in the game because character upgrades make skills dish out more damage than any of the orbs can.

After claiming victory in battle the player will be rewarded with currency, experience points, and resources for upgrades if certain conditions are met. There are three ways to upgrade the Blue Foxes: a skill tree that strengthens each unit’s skills, Magilumic Orb research strengthens orbs, and Weapon Development unlocks stronger weapons to buy at the shop. The DioField Chronicle balances these resources used to upgrade these very well. Some of the most difficult and crucial decisions come with these upgrades and which units to use them on. Meeting certain conditions in battle rewards the player with more resources to use for upgrades. Those two conditions are not allowing a unit to fall in battle and to finish the battle before a certain time limit. Since the game is not difficult on normal, this is a good way to reward the player for completing battles efficiently. There are accessories that can boost character attributes and give them passive abilities. 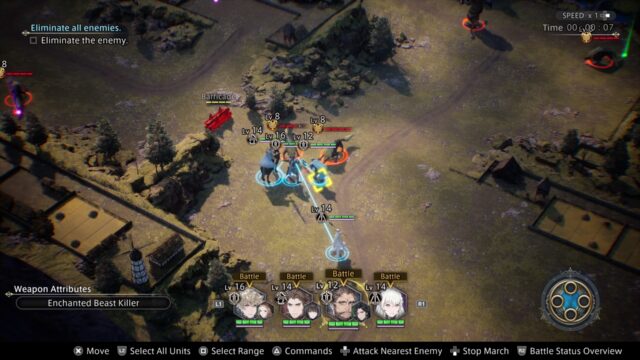 The Blue Foxes in action

The shop and upgrade stations can be found in the hub area. While character models for the most part look good, in the hub area character models are noticeably stiffer than in other portions of the game. The player takes control of Andrias and is free to roam around the base, which is just a two-floor building. This is also where character and the main story missions can be initiated as well. The DioField Chronicle follows a very formulaic structure. Upgrade and buy items, battle, and learn more about what is going on in this world with narrated scenes. That rinse and repeat pattern can make binging The DioField Chronicle difficult, but the game excels in chipping away at it in small chunks due to its quick, compact battles that can even be sped up to x2. The soundtrack also follows that pattern of repetition. Although the soundtrack fits the high fantasy setting well, none of the tracks individually stand out and the repetition certainly does not help.

The DioField Chronicle’s real time tactical battles are a refreshing addition to an ever-growing genre of tactical RPGs. Battles are addicting and compact, and although it’s not difficult, the many choices and upgrades keeps it engaging throughout its 25–30-hour playtime. What slows down the fast-paced combat is the bland and lifeless story. Political, high-fantasy war narratives don’t work with a largely unexplored world. The approach to storytelling with the use of narration and a map of the world to play out important moments doesn’t do enough to bring the game to life. That’s even more apparent when the few set pieces that do show up are by far the most memorable. Luckily, a solid cast of characters keeps things interesting long enough to continue to enjoy the game’s addicting combat. There’s enough good in the battle system for fans of the genre to get plenty of enjoyment out of it, but the formulaic gameplay loop and bland story keep this from being a true gem.