A Tale Striving for Perfection

A highly beloved JRPG franchise, the Tales of series is celebrating its 25th anniversary. To match the grandeur of the occasion, Bandai Namco released a new, top-notch tale. Half a decade after Tales of Berseria was released, the developer returns with an unmissable masterpiece for JRPG fans. Tales of Arise is an exceptional story-driven action experience that carries over many staples of the series — an action-packed battle system, skits, crafting, and familiar names of abilities and items — for long-time fans, while newcomers will find an ideal starting point to dive into an iconic series.

The game is set in the twin worlds of Rena and Dahna. Renans, respected for their ability to use astral energy, have ruled over the Dahnans for hundreds of years. In that time, the Dahnan slaves have been harvesting resources — mainly astral energy — from their world. As a consequence, its inhabitants live a polarized reality divided by social class. Players take control of a party that forms gradually and whose members come from different backgrounds, yet they are bound together by a shared interest. Their main objective is to prevent the Crown Contest, an event in which one of the competing lords is selected to become the next sovereign, ruling over both worlds and obtaining a great deal of power. There are five kingdoms in Dahna, each represented by an element and ruled by a lord carrying a master core, an object that condenses astral energy. Although the party’s common aim is to defeat these lords, all characters have additional personal reasons revealed as the story progresses and they’re sufficiently engaging to propel players forward. The story is readily alluring, and the plot unfolds a lot more beyond the Crown Contest, with a lot of worthwhile moments.

Tales of Arise includes a compelling array of characters. Every party member gets the spotlight at times, making each feel like they have a turn at a leading role. The six main characters are excellent, having peculiar personalities, concerns, and motivations. The way players get to know them is mostly through skits, a trademark of the series. They are conversations that party members have while journeying, concerning both ordinary and important matters. These moments make the process of getting to know the characters very enjoyable, adding complexity and weight to each of them, for players also get to understand their heroes’ fears and interests, as well as witness moments of friendship and romance. The game also casts an interesting set of antagonists and secondary characters who give authenticity to the story and to the duality of the world, matching the themes of oppresive governmental systems, slavery, suffering, and revolutions. 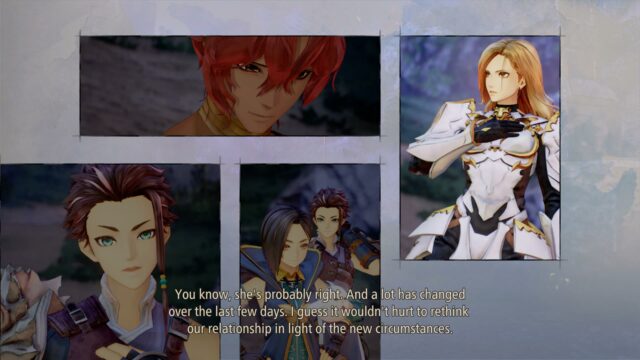 Skits are highly evocative of manga and are unmissable series staples.

The battle system is a delight. It has a considerable number of mechanics, but they are unlocked piecemeal, well explained, and become intuitive rapidly. At the beginning, there is one button to attack, one to dodge, and three for abilities called artes. While most artes only cost AG, which recovers over time, healing artes cost AG and Combat Points, which are shared among all party members, making healing an action that needs to be pondered. Each character has a vast array of astral artes to match their fighting style, and only some of them have healing powers. The inclusion of new members as the story progresses provides welcome refreshment for combat as they all have diverse strengths, skills, and ranges, giving combat a different feel while controlling each of them. For instance, while most party members look to evade attacks, one is built to block them with her enormous shield. Although players control only one character, they can switch the controlled character during the battles, depending on what they need or prefer to use.

Like other entries in the series, Tales of Arise includes three ways of controlling the selected party member: manual, where players have total control; semi-auto, which is similar to manual but the controlled character automatically moves within range for attacks; and auto, where the AI follows a selected strategy. Strategies are highly customisable, so players can specify usage of a healing arte when an ally is low of on HP but only if CP is above a certain amount. There are many slots for orders, allowing players to have strict control of all members. Additionally, players can create different sets of strategies and switch them depending on the occasion.

Players control all characters’ Boost Attacks, which are powerful strikes that have a specific purpose, such as protecting from an incoming attack, destroying the enemies’ defenses, or interrupting the casting of spells, with each character having a unique Boost Attack that matches their fighting style. A new feature of the battle system is the inclusion of powerful two-character attacks called Boost Strikes that can be unleashed after staggering a foe by landing lengthy combos. These strikes are also used nicely within the narrative since many powerful enemies are defeated using one of these strikes. In addition, well-timed defensive moves are beneficial. After successfully dodging or blocking several times, characters can enter an overlimit state in which they are stronger and able to unleash their ultimate Mystic Artes.

There is a vast array of zeugles, common monsters that inhabit the five realms, that have different attacks that will keep players alert. Additionally, there are powerful optional encounters that will force players to master the battle system in order to beat them. Luckily, the game provides four difficulty settings to swap between if things get too easy or hard. In addition to experience points, players obtain Skill Points after battles or completing quests. SP are used in the skill panel to upgrade characters by unlocking skills. The skill panel is a wonderful complement to the battle system. 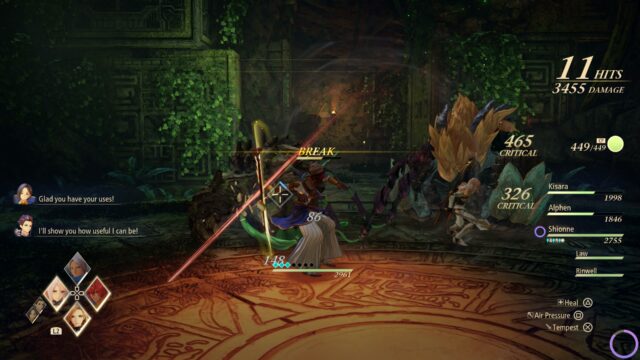 The battle system is flashy and amusing.

When players are not fighting, they’ll find themselves exploring, which is highly pleasing, though there is a substantial fast travel option that prevents traveling back and forth between areas from becoming overly time consuming. The map includes indicators for places of interest, monsters, fishing spots, and other potentially helpful objects, as well as pointers for where quests and objectives are located. Most sub-quests are fetch errands that don’t provide anything on the narrative side, but are needed to get money, recipes, and SP. Other activities accompany the whole journey, such as finding owls scattered worldwide that carry fashionable items, or being in charge of a ranch that raises livestock for use in cooking.

Tales of Arise’s side-activities have positive effects on the characters’ growth. Cooking, fishing, fighting in the training grounds, and completing quests give characters titles, which unlock certain abilities in the skill panel. When players reach a camp or an inn, they can cook before resting. All dishes grant different temporary effects that will power up the party during their travels, such as granting more experience or increasing item drop rates. Some characters can grant additional positive effects if they are the ones cooking a specific dish. Tales of Arise gets in on the fishing action too, with its version requiring players to move the joystick left or right and press the correct button in order to reel fish, which may not be groundbreaking, but is certainly fun. In the training ground, players can participate in solo or group battles that grant prizes for being victorious, with a bonus reward for finishing below the target time. Players can also forge weapons and craft or enhance accessories using items found scattered all around the world or dropped by enemies. There are also objects called artifacts which grant permanent effects, such as experience boosts or discounts in stores. Artifacts make the journey less challenging and many can be purchased as DLC. 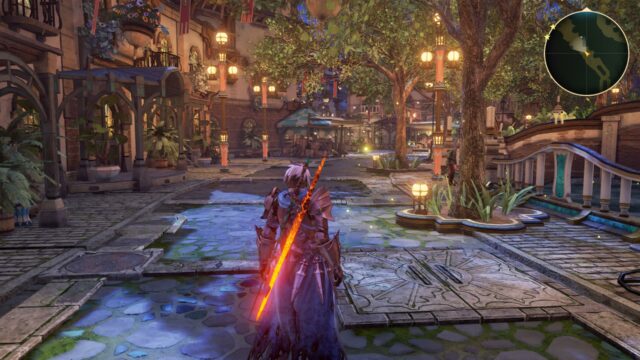 The visuals are anime-inspired, and the backgrounds have a watercolor vibe.

If a strong story and a marvelous battle system are not enough to lure players, Tales of Arise casts a spell with its gorgeous visuals. Character models are very appealing, and their outfits are highly customisable and have top-quality details. There are tons of fashionable accessories that serve as ornaments, and even the weapon and armor skins can be changed if desired. Pleasingly, these adjustments are also shown in the story videos and skits. Backgrounds use a watercolor effect and look incredibly inviting, with every kingdom having characteristic colors, features, and climatic conditions. Every building reached, monster found, and new feature introduced looks amazing. The video and animations are spectacular: players’ eyes will be constantly amazed.

The soundscape is engaging as well. Voice acting is excellent, and the musical score includes many well-crafted tracks that complete the anime-vibe and make the experience more immersive. The fishing music, for instance, makes the struggles with the catch more thrilling. The only complaint with the soundscape occurs while battling. Since all characters shout out the names of their skills, and sometimes there are three or four at the same time, it turns into a sonic chaos in which the lovely battle music is masked by the other noises. Nevertheless, one gets used to it after a while.

Tales of Arise includes the trademarks of the franchise and shows that twenty-five years of experience help to strive for perfection. Just like a good wine, the franchise has managed to get better with age. The battle system, anime-inspired visuals, and a story full of lovely characters are the stars of the show, which ultimately make a game that shouldn’t be overlooked. Tales of Arise is an entry that will satisfy die-hard fans and convert newcomers to the series with its awesome experience.