There has been a resurgence of the tactical RPG throughout 2022. It’s been a year of revitalizing the genre with new titles drawing inspiration from old titles or remaking them altogether. When RPGamers discuss the best tactical RPGs, Tactics Ogre always claims a top spot. Remaking a game more than once is a strange occurrence, but Square Enix was clearly confident that the time was right for newcomers and veterans to dive into Tactics Ogre: Reborn and that confidence is justified by the final product.

In the opening minutes of Tactics Ogre: Reborn, players are presented with five difficult questions associated with tarot cards, which determine their main character’s base stats. These questions offer a variety of uncomfortable scenarios that force the player to think about their choices, giving them a taste of the kind of decision-making required during the playthrough. Once the selections are made, players are introduced to the Valerian Isles, a nation trapped in a deadly war with no signs of slowing down.

The Valerian Isles are home to three ethnic groups: the Bakram, the Galgastani, and the Walister, with members of each having their own desire for power. While there was once peace amongst the isles, the death of Dorgalua Oberyth Valeria left the nation without an heir, with each group clamoring for the opportunity to rule. The story begins with Denam, his sister Catiua, and their friend Vyce, members of the Walister resistance who attack a party they believe to be the Black Knights of Lodis. It turns out, however, that they have instead encountered mercenaries who become sympathetic to the crew, as Denam reveals that his hatred of the Black Knights stems from the fact that they imprisoned his father long ago. Displaced by the ongoing civil war between Galgastan, Bakram, and Walister, Denam and his friends strive to find justice for those who cannot defend themselves. 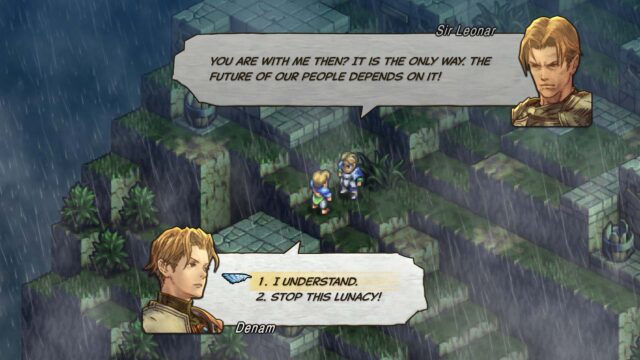 Every decision is a difficult one.

Tactics Ogre’s story is a spectacle of chaos in all the best ways possible. It’s a story of the horrors of war, what happens to displaced people, and the power of rebellion. It’s incredibly deep and rewarding, with a constant push and pull between nations and rulers, each believing that their plan will bring about the best version of Valeria possible. Every character’s motives are deep and complex, every secret learned is surprising, and each character feels fully realized and vulnerable to their core. Denam and Catiua in particular have such a beautifully written sibling relationship that feels both incredibly powerful and so fragile at the same time. The investment in both character development and in storytelling is definitely a triumph for the genre.

The strength of the game’s narrative also comes from the fact that there are multiple branching pathways and endings. Many of the decisions present in the game are deliberately difficult, as they focus on tough questions such as sacrificing a few innocent people for the possibility of peace in the grand scheme of the war. These heart-wrenching decisions can alter Denam’s story in a multitude of ways, such as changing potential recruitment encounters as well as altering specific storylines and people’s fates. There’s a lot of intricacy in the branching paths, giving the game tons of replayability.

It also helps that the game is coupled with a fantastic localization that truly humanizes the entire cast of characters. While there are straight-up villains in Tactics Ogre, there are also plenty of characters that players can sympathize with and ulterior motives to understand. Morality in Tactics Ogre is not black and white; the game is full of morally gray characters and its take on morality is all the more deceptive, showing just how much a decision can affect the world. It’s a lot to keep up with, but the in-game Warren Report provides players with a readily available resource to read about their exploits so far, learn about how the world is changing around them, and uncover potential sidequests. It’s an incredibly useful tool as it allows players to review their decision-making process while also reading about what is happening across Valeria. 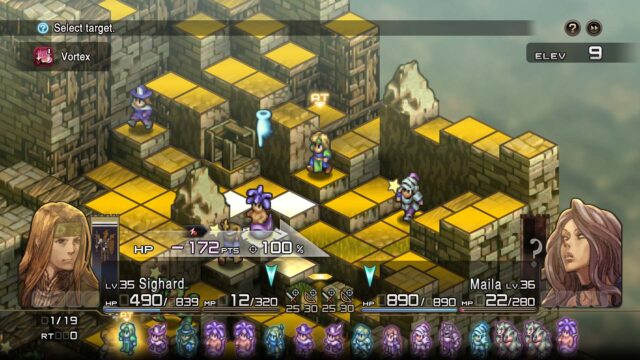 Outside of the deep political story, Tactics Ogre: Reborn’s other main draw is its complex and rewarding combat system. Each battle has a set number of units allowed on the field, with a turn order at the bottom of the screen allowing players to plan ahead. Battles are brutal; there is no hand-holding, and in many cases players will find themselves with multiple KO’ed units because it’s challenging to keep everyone alive and fully healed. Combat is certainly not impossible, but requires patience and strategy because the enemy AI is very smart. Battles are all about precise movements, as one wrong decision can often lead to a knocked-out unit.

As players move their units around the battlefield, cards will appear offering different buffs. These buffs range from physical, magical, or critical damage to magic regeneration, and even being able to trigger specific passive skills on the next turn. It’s important that players make every effort to collect the cards through battle, as these buffs can definitely change the tide for both sides. Each character can have up to four buffs active, while many enemy leaders start with four buffs automatically.

Players can use the Chariot Tarot to rethink and redo up to fifty previous combat turns total per battle, without any real drawback. While helpful, the game clocks how often the player chooses to use this special ability. It’s an interesting idea that can bail the player out after making sloppy decisions, but it’s not mandatory to use and smart players can work through the game without using it. However, preparation is important, as players must ensure that their party has the right classes and equipment for the battles ahead. Those wanting a difficult, thought-provoking tactical experience will certainly get their money’s worth with Tactics Ogre: Reborn. 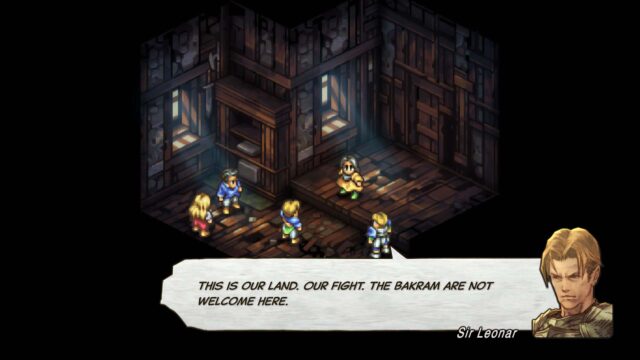 Companion or zealot? You decide.

Characters accumulate MP during combat as opposed to starting with it. This means magic users are unable to lay waste to foes on the first turn, but as they build their MP — potentially using skills to build it faster — their available array of magical attacks becomes far more deadly. While many tactical RPGs include grinding as part of the norm, Tactics Ogre: Reborn encourages experimentation with classes and the types of skills and magic that each unit has at its disposal. Players can level units’ weapon skills which can grant them a Finishing Move, a devastating attack that can be a real threat on the field if used at an opportune moment.

Each battle has additional objectives which reward players with rare items and extra experience points. While players can grind in training battles or sidequests for more skills, the Union Level is there to ensure that grinding isn’t fully necessary. All characters that participate in battle now level up, as opposed to previous versions where only surviving units would level. The Union Level also caps at certain points until more of the story is completed. Reborn‘s mechanics for creating new units or transforming current ones feel streamlined, and its respect for the player’s time in getting such units up to par without grinding is appreciated.

Tactics Ogre: Reborn comes with updated graphics. Every background and area has been updated to HD, with all locations looking crisp and clear. Each locale has a distinctive feel and design that makes it look inviting. It’s a shame, however, that character sprites did not get the same treatment, as they often look soft against the backgrounds. The game also has a much more streamlined UI, providing a line-of-sight indicator for magic and ranged attacks. While maps are grand in size and full of detail, the fact that there is no 360-degree view is a drawback. Instead, players can change the camera so that it flattens the map, which isn’t pretty to look at, but is helpful for understanding and gaining a perspective of the more complicated battlefields. 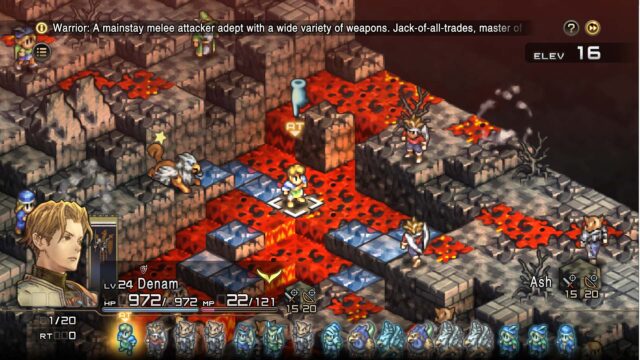 Who doesn’t love a lava stage?

The majority of the battles simply require that players defeat the leader or all enemies. There is little to mix things up, such as potentially defending a character, while recruiting characters is often challenging if they are the leader of that specific battle. In fact, Tactics Ogre is quite deceptive in how some characters can be recruited, and it is easy to kill such a character when the game is stingy about clueing players into whether they are recruitable or not. This is where a guide definitely comes in handy, but anyone playing the game blind will have trouble figuring out the more finnicky character recruitments.

Tactics Ogre: Reborn shines in the music department. The tracks composed by series veteran Hitoshi Sakimoto do an amazing job embodying what is happening throughout the story, offering somber tones as well as fantastic battle marches that charge the player up for conflict. The soundtrack does a phenomenal job of evoking a variety of emotions throughout the narrative beats, adding a beautiful emotional layer that gives these story moments all the more impact. Besides the gorgeous soundtrack, the game also offers full voice acting, and this is another successful addition. The English voice cast does an amazing job of invoking each and every moment within the game’s story, with each actor providing the right amount of emotion to their character. The voice acting in Tactics Ogre: Reborn deserves a ton of applause as it’s clear each actor understood the assignment and infused additional layers of emotion and vulnerability to their characters.

Clocking in at over fifty-five hours of gameplay, Tactics Ogre: Reborn is a worthy remake. While there is not an insane amount of improvements compared to the PlayStation Portable version of Let Us Cling Together, this is by far the definitive edition, and it does a great job of welcoming new players while also offering an intense gameplay challenge for veterans. I knew Tactics Ogre was special the moment I had to make those tough decisions at the beginning, and I found myself thinking about it even when not playing. Every battle made me want to proceed to the next because I needed to know Denam’s story. That alone is a testament to how powerful the narrative is, how addictive the gameplay. If you love tactical RPGs and somehow missed this classic, you owe it to yourself to check out Tactics Ogre: Reborn and dive into what is arguably one of the best tactical RPGs ever made.