Sword Art Online is an anime series that has quite the large fan following. Considering it’s an anime about massive-multiplayer role playing games, you’d think that an actual RPG released for the series would be an easy sell, right? While the game was released on the Vita, it would seem the developer got a little ambitious and decided to release it on PlayStation 4 as Sword Art Online: Re: Hollow Fragment.

And it is a train wreck.

Our story begins with a bunch of MMO players who end up trapped in the world of Sword Art Online. Unable to log out of the game, Kirito and friends begin to investigate the occurrence. If players try to escape the game, they die in real life. The only way to escape this game is to make it to the 100th floor of the game’s iconic tower. While this is the “plot” of the game, it’s fairly bare bones. In fact, the game would be more interesting if this storyline were the main focus. What players are treated to instead is a disgusting and obnoxious level of fanservice that borderlines on the offensive. The female characters are gaga over a protagonist who has the personality of a stick, each of them behaving like a bimbo if they aren’t receiving the level of attention they so eagerly crave. They spend more of the game behaving like stalkers than actually being characters. Although the game thinks it’s attempting humour, it’s much more unpleasant and slimy than it should be, considering how often the boob groping jokes are played up. It’s sad and tiresome given that the localization was updated for the PlayStation 4 release. The PlayStation Vita version had a hilariously awful localization in its original incarnation, and while this new and improved localization is welcome, it doesn’t change how bizarre the story beats in this game really are. 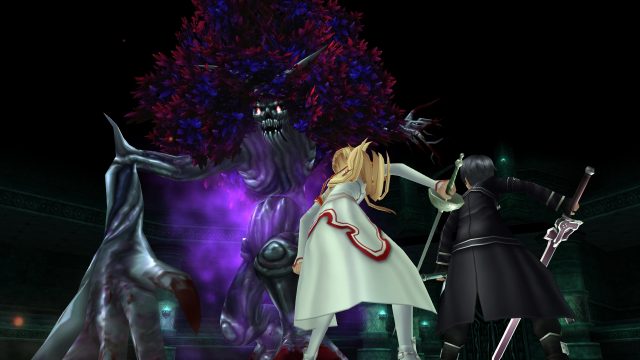 Speaking of personality, this game has none. Players will roam through uninspired areas, each set up in an identical manner (with an odd puzzle thrown in, because y’know, puzzles), filled with boring, palette swapped enemies, performing repetitive quests that are either “kill x number of enemies” or “find x number of this item.” There’s nothing inspired or interesting about what players are expected to do in Re: Hollow Fragment. Even the Hollow Fragment missions, which are unique to that special area and a little harder than regular ones, are equally dull. There’s nothing to get jazzed over when playing this game, and given the cult following the anime has, one would think the developers would try a bit harder.

For a Vita to PlayStation 4 port, the production values on this game are janky, sporting poor optimization everywhere, but especially in towns, where the game will even go so far as freezing when too much is on screen. In larger areas the framerate dips to unplayable levels when too much is going on at once. Couple this with tons of screen tearing, characters getting stuck in environments or just outright disappearing, and it’s just such an awkward experience. While the latter issues do not happen as frequently, the fact that it happens at all is baffling to begin with. Regardless of whether the player is in the main area or Hollow Fragment Area, it’s banal, with no variety in terms of the game’s aesthetic design.

The only aspect of this game that seems at least somewhat well thought out was the combat system. Kirito can equip a variety of different weapons, build skills towards said weapons, and unleash super flashy attacks. Players can use the skill palettes on the D-pad and face buttons and change skills on the fly which is a really nice touch. Kirito can also take a heroine with him into his dungeon delving adventures and they will offer advice during combat excursions, such as “stun the enemy” or “use an AOE skill” and while it should be common sense to know when to use these skills, it’s not bothersome that the heroines offer hints to players when needed. As players complete different quests they are given intelligence on the floor’s boss battle, which is also very helpful for players. Boss battles have different expectations of the player, and while players can go in using set skills and weapons, the intel offers insight on an alternative way of handling the boss. Furthermore, boss battles play out more like a siege, as groups of players can participate in the boss battle to help Kirito out. 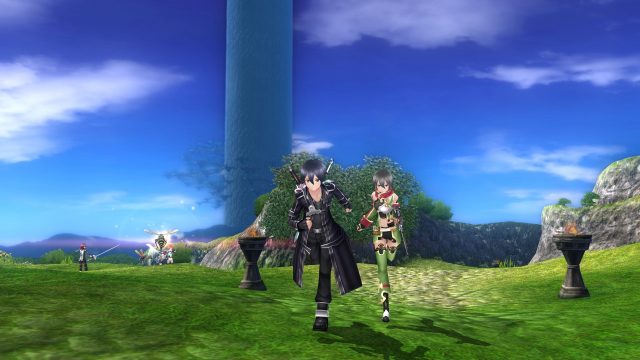 That Tower is going to become your best friend.

There are also visual novel aspects present in Re: Hollow Fragment, though they aren’t done in an interesting way. Those who complete the tasks and minigames are treated to an ending that is heroine-specific, which can be a nice reward if one enjoys the characters. Given that the visual novel presentation is done much better than the RPG part, it’s a shame the developers didn’t push it further to make it a much more cohesive part of the game, as completing the quests for the heroines is completely optional.

While the visuals are definitely an issue in Re: Hollow Fragment, the soundtrack is also quite mediocre. The game loops the same four songs repeatedly and the music transitions awkwardly when a battle starts. This is likely due to battles taking less than a minute, making the tune change irrelevant and annoying. The tracks do a poor job of amping the player to get excited for combat. The voice acting is quite good, as it uses the original Japanese voices from the Sword Art Online anime, but that aspect feels like it should be a given.

Sword Art Online: Re: Hollow Fragment should have been an easy game to complete, and yet I found myself actively avoiding it. Every time I loaded it up, I kept thinking about other, more interesting things to do: like picking up dog poop or doing laundry. That is never ever a good sign when playing a game. I was so excited about even being able to pick my own gender at the beginning of the game, only to find out that didn’t matter, as my female character sported Kirito’s voice over. Why bother including that? I feel sorry for fans of Sword Art Online because there clearly is potential to make a great game out of the series, but if this is the best it has to offer fans of the series? Clearly you’re getting ripped off. At the end of the day, Re: Hollow Fragment is lazy in every sense of the word, and just isn’t worth the dollars that Bandai Namco is asking for.