The Story of Seasons/Bokujo Monogatari series has truly evolved over the years. It went from being a warm dependable blanket to having a more rustic and opportunistic feel. There is something to be said about growing old with a series: you know when it is on point, and equally when it is off the mark. Story of Seasons: Pioneers of Olive Town takes several risks in its gameplay mechanics, but doesn’t entirely pay off.

Players take on the role of a city slicker dreaming of a more rustic life in the great outdoors. On their adorable little motorbike, they drive towards the seaside Olive Town for a better life. After arriving in Olive Town, the player receives their grandfather’s farm from Mayor Victor, who requests their help in revitalizing it. The Mayor also explains that tourism in Olive Town is quite low and shares his plan to get the attention of a luxury liner that often passes by. With the player’s assistance, Mayor Victor hopes that Olive Town can reach its tourism goals. Players are also encouraged to mingle with the townsfolk, and maybe even find a special someone to plant roots with.

The townsfolk are cute in Olive Town, though they are not the most memorable cast of characters. While the localization does a good job of trying to bring out some sense of personality, there is a dryness to the characters that just does not make them the most engaging. The romance scenes, however, are very well done and offer some very tender moments. From Jack aspiring to become a radio star instead of running his mother’s general store to Laura wanting to prove that she is self-sufficient while still trying to take care of her family, these little moments are where the story elements truly shine. The main story of getting the luxury liner to Olive Town, however, is completely forgettable.

Like most Story of Seasons titles, farming is a large component of the game. Pioneers of Olive Town stands apart because it requires the player to assist the town in a larger goal that needs to be accomplished. Often the tasks ask players to harvest required materials from their farm, which they will then bring to the mayor’s office. The game is all about building the farm from the ground up, and encourages players to fetch the materials themselves instead of spending money to have the task completed. Even though it feels like players shouldn’t be spending it on upgrades, money is surprisingly easy to acquire. 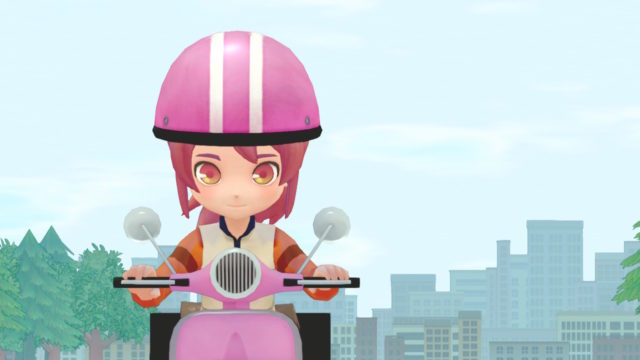 As players build different components of their farm and assist the mayor in his goals, more areas open. As areas open, players can build new structures, tame different animals, and acquire new material types. The game has such an addictive animal husbandry and farming loop that it is easy to get into the groove of tending to the animals and crops. Crafting is also a huge component of the game, and it is a simple process: gather the specific items and craft. Material and tool upgrades unlock at a steady pace, though this slows down considerably in the higher ranks. Players can also craft their own makers, which allow them to process materials. However, the number of makers a player needs to have on their farm to consistently process items is, for lack of a better word, silly.

Makers are a core component of farm life in Olive Town, but this element was not well thought-out. While there is a huge variety of makers that process wood, ore, wool, etc., they can only process one item at a time. If a project requires fifty gold ore, it can take players weeks to acquire that amount even if their farm is made up of nothing but ore makers. While it is possible to put more items in, a player’s crafting level must be at ten for that to be possible. This process takes too long, and it is truly a disservice to a player’s time and should have been implemented in a more player-friendly way. It doesn’t help that having your farm littered with makers is also just aesthetically unattractive.

What is also unappealing is how fast everything regrows on the farm. While players can craft walkways and fences, every area of the game is littered with trees, rocks, and forage items, which regenerate almost too quickly to keep up with. Making an aesthetically pleasing farmstead is surprisingly challenging in Olive Town because there are so many obstacles in the way that frequently need to be cleared out. It is time consuming to have to clear out these fast growing objects when other tasks need to be done.

All is not lost though, as the Earth Sprite system can help with problems finding rare materials. Sprites are found by doing daily tasks such as chopping wood, foraging, and farming, and are littered everywhere. As players collect sprites and upgrade the Earth Sprite village, additional options do open up. If the player has a high rank with the stone sprite and has unlocked Stonebreaker Valley from the Forest Spirit’s shop, getting material like Orichalcum becomes a lot easier. There are areas for all kinds of gameplay elements such as a great pond for fishing, and a forest that offers the best lumber in the game. Accessing these areas as early as possible can help streamline the player’s experience in getting the best materials without having to hope that they will randomly spawn. 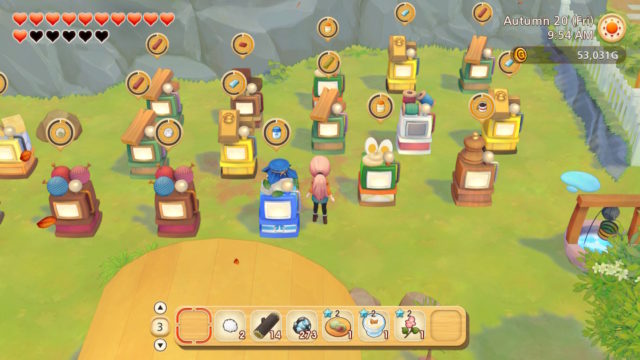 You too can have a farm full of makers!

Unfortunately, technical issues plague Pioneers of Olive Town, and they are quite the downer given the game has some good elements. There is constant slowdown whenever the player enters a new area as the game loads all of the assets. The load times, though they have been patched since release, are still not great. These technical issues, along with some questionable gameplay choices, hinder the experience.

Despite the game’s technical issues, it is a beautiful title. It’s vibrant and colourful, there is so much personality in the animals and townsfolk, and Olive Town is a bustling place on the whole. Even the game’s architecture has a lot of character. While the graphics are not groundbreaking, they are perfect for the experience that this series is known for. The soundtrack is lovely, and each of the songs that change with each season are very inviting for the player. There is a sense of wanderlust and adventure in the music that fits the theme of pioneer life to a tee.

Story of Seasons: Pioneers of Olive Town is one of those games that has some great ideas such as building the farm from the ground up and engaging crafting as a focal point. While these risks are welcome and are great additions to this long-running series, there is no excuse for the technical issues that afflict the game, or the gameplay choices that require players to have their farm overrun by ugly makers. Those who love the farming elements will fall into the gameplay without trouble, though I wish the game had done a better job of balancing all of these elements in a way that respected the player’s time a bit better. Pioneers of Olive Town is a good game, but it is hard to recommend when Stardew Valley continues to dominate the farming sim genre.

Disclosure: This review is based on a free copy of the game provided by the publisher. This review was written before the launch of the version 1.0.4 patch.