Out of the Shadows

The Nintendo Switch is proving itself to be a haven for indie games, as well as for retro efforts designed to emulate classic RPGs of early console generations. Something Classic Games’ Shadows of Adam is a bit of both: the game was released independently two years ago on home computer systems, and incorporates an art style, musical composition, and gameplay elements that will strike chords with any seasoned gamers worth their salt. Although its story isn’t always flawlessly compelling, it manages to be an overall fairly enjoyable experience that doesn’t overstay its welcome.

The aim of Shadows of Adam, according to the developer, is to take several favorite aspects of classic RPGs and combine them into one experience. With this mantra always in the developer’s mind, it should come as no surprise that the game will frequently appeal to gamers’ sense of nostalgia, usually favorably. The times it comes up lacking aren’t so significant or numerous enough to cast much of a damper on the enjoyment this title offers. Even so, Shadows of Adam is perhaps a bit too simple for its own good, preferring to tell a highly linear tale with very little wiggle-room for player exploration of its world.

Players are thrown right into the middle of a series of ongoing events in the small refugee village of Adam. A text overlay informs players that Adam’s citizens are survivors of the Wraith War, which wiped the existence of magic off the face of the world many years ago. Or very nearly so, as the young girl Asrael, who has been sent to investigate a nearby overgrown area known as the Tangle with her friend Kellan, does mysteriously have some magical ability, and is feared and shunned by her fellow Adamites for it. Over the course of Asrael and Kellan’s investigation of the Tangle — the game’s first dungeon — more bits and pieces of the story are revealed via flashbacks, dialog, and event scenes. 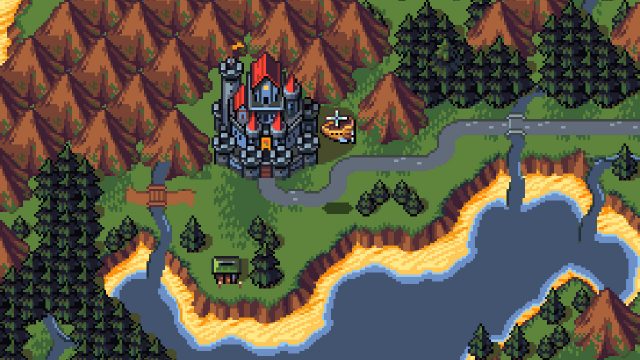 If only there were more to do on the map than head to the next (and only other available) location.

The trouble is, despite some occasional humor and charm successfully injected into the writing, this early narrative feels inefficient. There’s a whole history that colors characters’ interactions with each other which the player isn’t sufficiently clued in on. There is always a trail of breadcrumbs to follow from location to location, like a magical book found in the Tangle that must be delivered to the Big City, or Kellan’s lost father pleading for help via ghostly visions. But the story threads never quite draw the player deep enough into the narrative. The world design is far too linear, with one singular objective leading to the next, often only a few steps away on the world map with no side quests to participate in, and the characters themselves are either suffering from anemic personalities or become one-trick ponies. For example, two of the game’s total of four party members are locked in a perpetual brotherly rivalry, which is humorous at first but gets very stale once it becomes clear that there’s not much else to their characters. Curtis, the mysterious one-eyed martial artist, fares the best in this regard, with a backstory that is returned to at numerous points throughout the adventure and is central to the plot. Overall, Shadows of Adam‘s story, while never outright poor, ends up being one of its weaker aspects.

Shadow of Adam‘s combat system, on the other hand, succeeds in taking traditional, front-facing battles and infusing them with an interesting take on classic abilities and magic spells. Apart from a standard attack and the option of using an item, each character has a unique talent, like Kellan’s Skills or Azzy’s Magic, which is at the heart of what makes combat rather tactical in this game. Each ability costs a set percentage of that character’s Ability Points. While new abilities can be learned via leveling up, the AP bar never exceeds 100%, barring some stat-increasing artifact being equipped. For example, healing via Asrael’s Soothe spell will always expend 20% of her AP bar. The twist is that the AP bar usually refills by 15% each round of combat, though this can be more or less depending on player and enemy actions. Because of this, late-game encounters remain as engrossing as early-game battles, the AP management aspect keeping combat feeling fresh well into the game’s relatively short duration. Enemies are also clearly visible — and often avoidable — on dungeon maps, and the need for grinding is severely reduced by enemies not respawning, meaning there is a cap to how much grinding and leveling can be done in any one location.

Dungeons themselves tend to be equally enjoyable, and incorporate some puzzle solving to break up the combat. Each dungeon incorporates either switch puzzles, various sliding block puzzles, crumbling floors, or maze-like minecart track systems, with the final dungeon combining all of the above into one. Between the dungeons and combat, there is enough variety to keep things from feeling stale, while the difficulty generally remains quite fair for those that don’t skimp on XP opportunities. 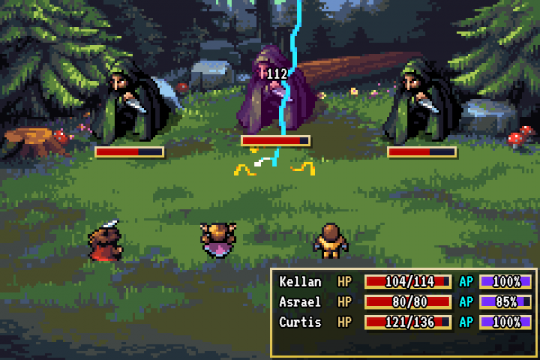 Combat is a turn-based mix of familiar grind with Ability Point management.

Each dungeon has some type of aesthetic theme, like the aforementioned Tangle, or the Water Gardens. This is where the game’s classical sensibilities are perhaps more evident than anywhere else. Shadows of Adam takes 8-bit pixel art and sprite-based characters and creates some very appealing environments. In all the best ways, there’s little to distinguish this game’s look from the older titles it emulates, but it’s all been well polished, with careful attention paid to adhering to a vibrant color palette. The graphics pop most using the Switch’s handheld capabilities; it’s merely in docked mode that character portraits, for one, become perhaps a bit too grainy for most modern tastes.

The game’s music certainly is no slouch, either. Right from the outset, the soundtrack hits the ear in just the right way, providing a strong first impression that doesn’t subside anytime soon. There are some heavy  8- and 16-bit Final Fantasy influences evident in quite a few tracks, which not only speaks to their quality but also creates a pleasant nostalgia in the player. Being a throwback RPG, voice acting is, of course, not present in any capacity.

For those with a fondness for old-school game design, Shadows of Adam will offer a more than worthwhile experience, even sneaking in some more modern updates like a run button and a New Game Plus mode. While its story at times has trouble hitting its mark, this is made up for by the thought-provoking and well-proportioned turn-based combat and varied dungeon designs. It does enough things right that it should definitely be on every retro gamer’s radar.

Shattered: Tale of the Forgotten King

Brigandine: The Legend of Runersia