It’s been a number of years since Square Enix ventured to create a new title in the Mana series, instead going for remakes of things we’ve already seen. Considering how little has been changed from the original, having a Secret of Mana Remake isn’t necessary for someone wanting to get everything this game can provide. A couple of additions are nice, but the original game is easy to play via digital sources today and delivers mostly the same experience. That’s not to say this remake is outright bad, just a missed opportunity to do something a little bit more.

A boy in the village of Potos unwittingly manages to unseal the Mana Sword in his effort to find an implement that will keep rampaging wildlife at bay. His fellow villagers respond to this by banishing the boy from the village. Taking up the Mana Sword is something only the legendary hero can achieve, but the boy is unable to immediately rise to the task of becoming a legend. Together with a girl seeking her beloved and a sprite with memory issues, the boy must learn to unlock his inner talent and fight back against the encroachment of evil.

Secret of Mana on the SNES was translated by Ted Woolsey in six weeks, an impressive feat but not one that could have been achieved in a title with dense and complicated text. Secret of Mana in 2018 has a few added lines and some that were altered from the original localization, but remains a game without great reams of plot. Adversaries are thoroughly evil with no nuance, situations are sometimes given the bare minimum explanation necessary to become comprehensible to the player, ideas are often introduced while being given no further development and the game world could have had a great deal more fleshing out. These things were understandable in the 1993 original and didn’t stand out among the comparative brevity of stories at the time, but this remake had the opportunity to go further and completely squandered it.

The sole major addition comes in the form of conversations the protagonists have amongst each other when staying at inns. These aren’t quite revelatory in nature but do provide some amusement, particularly when the cast attempts to puzzle through certain elements of the game world that otherwise get little explanation. Conversations are unfortunately locked into a certain order, and the player is very likely to encounter talks that relate to events no longer relevant to the current events unless a point is made to sleep as often as possible. 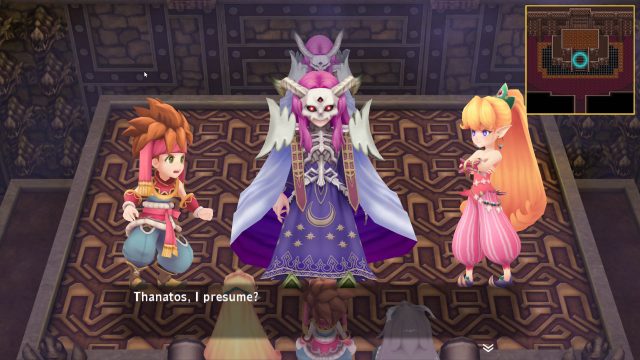 In a shocking and unexpected twist, Thanatos has a fine tenor and brightens the mood with his voice.

Secret of Mana is an action RPG with a few particular quirks, and this remake keeps what was already present without altering much. Playing Secret of Mana like a more action-oriented title will result in frustration, because characters have to wait a moment after attacking to do so again at normal strength. Mashing the attack button will instead produce a number of weak and ineffectual swings. Holding the attack button down allows characters to charge up stronger physical strikes, though this is a time-consuming process and dramatically slows down the person doing the charging. Player skill doesn’t matter much when dodging attacks, since evasion and defense statistics determine the result.

Despite not rewarding twitch reflexes, the combat is addictive and entertaining. It moves along briskly without bogging the player down in unnecessary systems, sporting a strong variety of enemies and environments to keep things from getting monotonous. Magic is simple to use and eliminates any possibility of enemies dodging the attack, but limited magic points keep the player from spamming spells early in the game. Secret of Mana also does not outstay its welcome, as it’s possible to finish the game in around twenty hours, which removes the threat of getting bored thanks to needless hours spent.

The ring menu design of the original title has become well known through the years, and remains effective in this incarnation. It efficiently displays all necessary information in a way that can be quickly sorted through, something that’s very useful when switching between weapons or gazing upon statistics. A new feature for this remake is the ability to increase the item limit beyond four, though this is hardly necessary for completing the game. Something else that improves upon the original allows characters not currently under player control to be offscreen, instead of forcing frequent micromanagement to keep the team from being stuck on corners. Unfortunately, a downgrade in options for ally AI is baffling, and prevents the remake from handily trumping its inspiration.

Plentiful save points were not a common feature of console RPGs in the early 90s, and Secret of Mana was no exception. The presence in this remake of an autosave function when transitioning between rooms is therefore quite useful, but it also exists to assist with some technical issues. Crashes, while not constant, are difficult to avoid when playing the remade game. Having an autosave function allows the player to not lose quite a bit of progress in later areas, and fortunately this game is relatively quick to restart from the title screen when required. 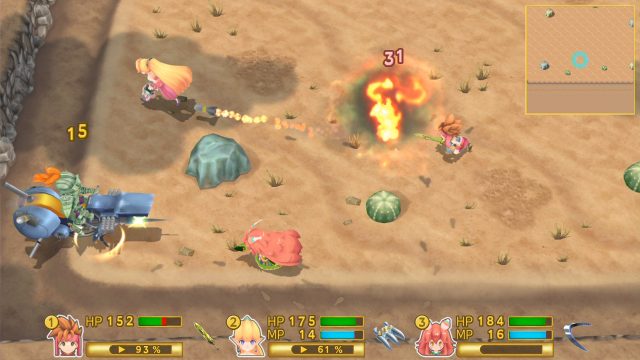 Secret of Mana Remake‘s visuals hew closely to the impressive sprite work from the original game, albeit with more detail. All of the same environments and their inhabitants are depicted in a style that doesn’t push the hardware, but does at least manage to portray the impressive designs of this title fittingly. Since no truly new images have been created there is still quite a bit of enemy palette-swapping, but the remake’s visuals do a good job of capturing the original style without looking outmoded.

Hiroki Kikuta’s original score is available along with rearranged versions of all the tracks. The original score has a distinct feel among other game soundtracks and is quite engaging, while the rearranged version is a mixed bag. Many different artists were responsible for the arrangements, leading to a wide variety in terms of quality, with some of the new versions sounding quite appealing while others are cacophonous messes.

Voice acting is something else added to this Secret of Mana, and the results are another mixed bag. The quality of the performances themselves is not at issue, since they’re mostly fine. Voicing every line feels like a waste of time in the case of NPCs with three or four words to say, however, and keeping most of the same script from 1993 ensures that many lines are indeed that brief. Important plot moments are now represented via large character models on the screen instead of nothing but dialogue, though the odd choice to have lines voiced without characters moving their mouths to accompany the sounds is perplexing.

Secret of Mana came at a time when expectations for RPGs were completely different than the present. This remake treads so much familiar ground that it is unlikely to attract many new players to the series, although it does capture what remains fun about the game quite well. Now that Square Enix has remade the first two Seiken Densetsu titles without altering much, perhaps it will finally give those outside Japan a way to play Seiken Densetsu 3 legitimately? I can hope.